Here Comes the Sun by The Beatles.

After days of sodden skies, rains, and flooding the Sun has come mostly back and promises to linger for a couple of days or so.  You can probably guess what that means.  Yep, a visit from the four lads from Liverpool on their penultimate studio album Abbey Road in 1969.  No song posted in this series probably has needed less introduction, but here goes anyway.

Abbey Road, named for the EMI recording studio used by Apple Records, came together during a period when The Beatles were undergoing stress with the different aspirations of its member John Lennon, Paul McCartney, George Harrison, and Ringo Starr.  Their former producer George Martin, sometimes called the Fifth Beatle, was called back to work on the album and reluctantly agreed only if the boys adhered to disciplined and cooperative work.

Harrison wrote Here Comes the Sun while idling away time in his best friend Eric Clapton’s garden and played acoustical guitar and was lead singer on the track.  McCartney provided backing vocals and played bass with on drums.  Lennon was recuperating from a car accident and did not perform on the track.  He may also have been perturbed by the close collaboration between Harrison and McCartney who had objected to Yoko Ono’s presence at the recording sessions.  Martin added an orchestral arrangement in collaboration with Harrison, who overdubbed a Moog synthesizer immediately before the final mix. 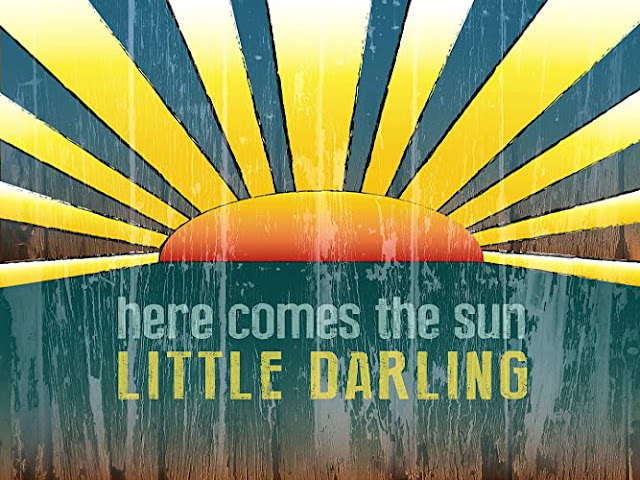 Here Comes the Sun was the lead song on Side B of the album and was never released as a single.  Many critics considered it to be the best cut on what easily became a classic album.

Posted by Patrick Murfin at 4:06 PM