The Songwriter of the American Century—Irving Berlin

Say happy birthday to Israel Isidore Baline, born May 11, 1888 in the city of Tyumen in the Ural Mountains 1200 miles west of Moscow.  His father, a Canter, moved his family to the relative safety of the United States in 1893 after Cossacks burned the Jewish Quarter of Tyumen to the ground.  Only three years later his father was dead and the eight year old boy had to quit school and work as a news butcher—a street peddling paper boy—for pennies a day.
He left home at 14 to leave his mother one less mouth to feed and began to support himself singing for tips in saloons, eventually working up to being a song plugger at Tony Pastor’s seminal night club.

He changed his name to Irving Berlin and began to try his hand at songwriting.  His first success was Alexander’s Rag Time Band in 1911 which became a sensation after he wrote words to go with his music and got it placed in a Broadway review.  Its fresh sound and syncopated rhythm helped set off a new national rage for Rag Time music, which had gone out of fashion a decade earlier.
Self-taught on the piano—he never could play in any key but F—and unable to read music, none-the-less he eagerly launched himself on a career as a songwriter.  His first Broadway show, Watch You Step in 1914, starred dancing sensations Verne and Irene Castle and included several hits including Play a Simple Melody,  the first of his famous “double” songs in which two different melodies and lyrics are counterpointed against one another.
He would continue to write for Broadway and films for the next 60 years producing an unrivaled string of hits that included, A Pretty Girl is Like a Melody, Always, Blue Skies, God Bless America,  and There’s No Business Like Show Business to name just a few. 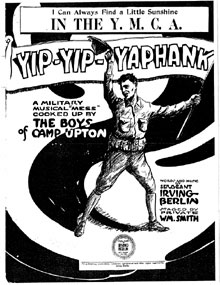 Nearly as patriotic as George M. Cohan, Berlin penned Oh, How I Hate to Get Up in the Morning for his World War I camp show with an all doughboy cast, Yip Yip Yaphank.   God Bless America was also written for that revue  but somehow failed to make the cut.  In 1938 he gave it to Kate Smith for a special 20th anniversary Armistice Day Broadcast and it became a virtual second national Anthem.   He toured for three and a half years to post in the U.S. and Europe with a second all-GI review This Is the Army in which he sang This is the Army Mr. Jones in GI uniform.  The show became the basis of a 1945 film of the same name staring Ronald Regan and Joan Leslie in which Smith reprised God Bless America. Berlin signed over all royalties from that song to benefit  the Boy Scouts of America earning them millions of dollars.
Berlin, a secularized Jew, is also known for his holiday songs including Easter Parade and White Christmas both of which were featured in the 1940 film Holiday Inn with Bing Crosby and Fred Astaire.  Easter Parade was the only song not written from the movie.  It first appeared in the 1933 revue As Thousands Cheer which presented each number as an item in a newspaper,   Marilyn Miller and Clifton Webb originally song.  Holiday Inn essentially transformed the newspaper items for holiday throughout the year stitched together by the thinnest of plots.  Both Easter Parade and White Christmas were again featured two in enormously successful self-titled movie musicals.  Crosby’s 1948 re-recording of White Christmas remains America’s favorite secular Christmas song and is an annual seasonal hit.  For decades it held the record as the bestselling recording of all time.

Early Berlin Broadway revues included now embarrassing blackface minstrel numbers and some of those were carried over to the silver screen.  But Berlin was a staunch advocate of civil rights and a long-time member of the NAACP.  In As Thousands Cheer Ethel Waters sang Supper Time, a lament for the lynching of her husband of which she said “If one song can tell the whole tragic history of a race, Supper Time was that song. In singing it I was telling my comfortable, well-fed, well-dressed listeners about my people...those who had been slaves and those who were now downtrodden and oppressed.”  Not surprisingly Hollywood film makers concerned with being able to show films in the segregated South never included Supper Time in any of the several movies they built around the Berlin song book.
Show business itself was often a theme for Berlin including numbers presented as vaudeville acts like A Couple of Swells.  And of course There’s No Business Like Show Business from his most successful book musical Annie Get Your Gun has become the enduring anthem of the entertainment industry.

Berlin’s personal life from the days when he was singing on the streets for pennies on was reflected in his music.  His first wife, 20-year-old Dorothy Goetz was the sister of E. Ray Goetz one of his early collaborators.  She died tragically of typhoid contracted during their Cuban honeymoon in 1912.  Grief stricken, Berlin could not write for months. Then his first composition was also his first ballad, the heart felt When I Lost You.

In 1924 Berlin married  Ellin Mackay, and Irish-American Catholic heiress whose father bitterly opposed the marriage.  He wrote the enduring classic love song Always for her and signed over to her personally rights to the song to make up for being disinherited by her father. The rights to that one song alone would make her independently wealthy.  Their marriage remained a love affair and they were inseparable until Ellin died in July 1988 at the age of 85. They had four children during their 63 years of marriage: Irving, who died in infancy on Christmas Day 1928; Mary Ellin, Elizabeth Irving,  and Linda Louise.  Blue Skies in 1926 was a jubilant celebration of his first daughter’s birth.
Berlin wrote in many styles over his long career but is perhaps best remembered for his simple, direct, and heartfelt love songs with lilting melodies and lyrics that seemed an extension of everyday speech.  A classic example was What’ll I Do? From 1924.

In all Berlin wrote around 15,000 songs.  Many of them are as fresh today as when first written and continue to be recorded by artists in a number of styles.  Berlin died in his adopted home town of New York in 1989 a year after Ellin at the age of 101.

Posted by Patrick Murfin at 6:12 AM