Your Feets Too Big by Fats Waller.

We celebrated the 114th birthday of legendary composer, stride piano master, singer, and outsized personality Fats Waller on a blog post this morning.  I’m not sure how I can shoehorn this into a Coronavirus confinement theme except to say that if Your Feets Too Big doesn’t bring you joy, you are probably already dead.
Waller made the theatrical film short Your Feets Too Big in 1941 for the short-lived Minico Productions and was intended for release on bills at movie houses for Black audiences.  Chances are that few whites saw it in theaters then although they may have caught it when it was packaged two years later for distribution with MGM’s Stormy Weather. 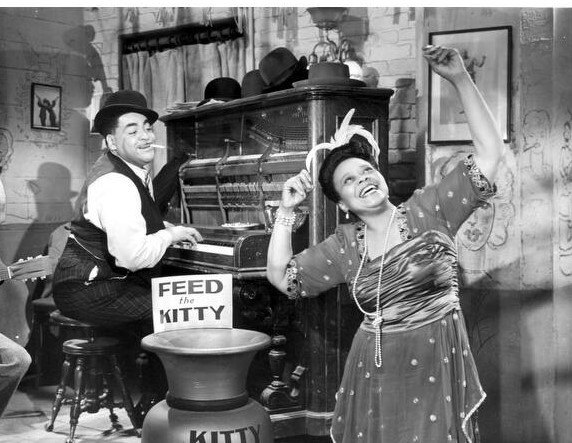 It was not a Waller original.  It was composed in 1936 by Fred Fisher with lyrics by Ada Benson and was recorded by both Waller and The Ink Spots in 1939. The song became most closely associated with Waller who ad-libbed his own lyrics such as “Your pedal extremities are colossal, to me you look just like a fossil” and his catchphrase, “You know, your pedal extremities really are obnoxious. One never knows, do one?”
The film featured a snappy young man in a zoot suit and large white shoes and eight attractive dancers.  The song is actually an extended double entendre correlating the size of a man’s feet to the length of a certain other appendage.


When Waller died two years after making the short Rev. Adam Clayton Powell Jr. who delivered the eulogy at a Harlem funeral that attracted more the 4000 mourners said that Waller “always played to a packed house.” Afterwards, he was cremated and his ashes were scattered over Harlem from an airplane piloted by an African American World War I aviator flyer.
Fats Waller wanted to go out with style.

Posted by Patrick Murfin at 4:08 PM