You Are My Sunshine—Murfin Home Confinement Music Festival 2020

You Are My Sunshine by Jimmie Davis.

We’ve shared a lot of songs about sunshine here at the Murfin Home Confinement Music Festival and they are all about hope and good cheer.  But in one of the most beloved country music songs of all time heartbreak lurks behind a lilting melody. You Are My Sunshine is most closely associated with Jimmie Davis and therein lays an interesting and not always happy tale.

One story is that Oliver Hood wrote the song in the early 1930’s and first performed it at a Veteran’s of Foreign Wars Convention in Georgia.  But was also attributed to one of Hood’s musical associates, Paul Rice of the Rice Brothers and that clarinetist Pud Brown contributed to an arrangement that broke with string band conventions with a Western swing feel.  It was first recorded in 1939 by the Rice Brothers Gang on Decca and the Pine Ridge Boys on Blue Bird.

Davis heard the song from the Rice Brothers while they were appearing on Shreveport, Louisiana radio station KWKH, the future home of the Louisiana Hayride.  Davis and his collaborator Charles Mitchell bought the song and rights from Paul Rice and put his own name on it, a practice not uncommon in the pre-World War II music business.  Although Davis never claimed to have actually written the song his name was credited on all of the literally hundreds of subsequent recordings of it and did everything in his power to make the song his own.

Davis recorded You Are My Sunshine in Decca’s New York City studios with an arrangement that replaced a fiddle lead with steel slide lap guitar and a jazzy clarinets break on February 5, 1940.  It was an immediate regional hit.  Later that year both Bing Crosby and Gene Autry scored top national hits with the song and delta blues guitarist Mississippi John Hurt as well as the ultimate dance band square Lawrence Welk also covered it showing the appeal of the song well beyond it country roots.

The song has been recorded so often that it is one of the most commercially programmed numbers in American popular music across multiple genres.  Just a few of those who have covered the song are Doris Day, Nat King Cole, Ray Charles, Ike & Tina Turner, Andy Williams, The Beach Boys, Aretha Franklin, Anne Murray, Chuck Berry, Jerry Lee Lewis, and Johnny Cash.
I personally learned the song off of a Gene Autry record as a boy in Cheyenne and it has been in my song circle repertoire of drunken caterwauling. 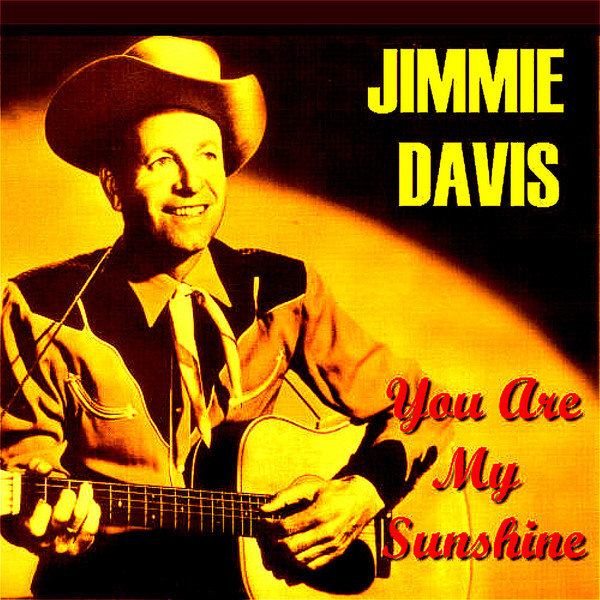 As for Jimmie Davis, well, he was a piece of work.  He was born as James Houston Davis according to Census records to impoverished sharecroppers on September 11, 1899 in Beech Springs, southeast of Quitman in Jackson Parish in north Louisiana.  He was the youngest of 11 children and neither her nor his parents knew how old he really was, guesses ranged from 1898 to 1904.

Despite the odds against him Davis managed to graduate from Beech Springs High School and the New Orleans campus of Soule Business College. Davis received his bachelor’s degree in history from the Baptist-affiliated Louisiana College in Pineville, Rapides Parish and a master’s degree from Louisiana State University in Baton Rouge.  His 1927 master's thesis, Comparative Intelligence of Whites, Blacks and Mulattoes examined the intelligence levels of different races.  Keep that in mind.

During the late 1920s, Davis taught history (and, unofficially, yodeling) for a year at Dodd College for Girls in Shreveport while he began performing locally in the fashion of his idol Jimmie Rogers.  He even began using the name Jimmie instead of James.  Like Rogers many of his early recordings were raunchy blues tunes like Red Nightgown Blues. Some of these sides included slide guitar accompaniment by Black bluesman Oscar “Buddy” Woods.  By the late ‘30’s he was a successful fulltime musician with a strong regional following.

Following the success of You Are My Sunshine, Davis appeared in Western films in Hollywood.  He spent enough time in California that he became part owner of a night club which sometimes featured integrated acts.

His folksy demeanor made him a natural at politics. Davis was elected in 1938 as Shreveport’s Public Safety Commissioner, the equivalent of police chief under the City Commission form of government. After four years in Shreveport City Hall, he was elected in 1942 to the Louisiana Public Service Commission, the rate-making body in the capital, Baton Rouge.


State Democratic Party powerhouses tapped Davis to run for governor in 1944 as a foil to the populist Long machine of built by assassinated boss Hughie Long.  Like the Longs, Davis’s base was among the poor “rednecks” of northern part of the state.  The entire campaign was built around You Are My Sunshine which Davis sang at every campaign rally, often from astride a horse named, you guessed it Sunshine.  He won in a landslide.

Davis’s term as governor was not distinguished.  He allowed officials selected by Party regulars and powerful business interests run things and make policy.  He spent much of his term absent from Baton Rouge in California for movies and making continued public appearances as a singer.  As a staunch anti-Longite he managed to get respect from Louisiana liberals, such as they were.  He earned the gratitude of national Democrats by keeping Louisiana from jumping ship from Harry Truman’s 1948 presidential campaign to Strom Thurman and the Dixiecrats.

Louisiana limited governors to a single non-consecutive term so Davis left office after that election.  He kept his hand in state politics but turned his main attention back to his music career reinventing himself as a White gospel singer performing widely at churches, revival meetings, and religious conventions.  But no matter how many old-timey hymns he included in his performances, he always managed to throw in You Are My Sunshine.

In 1960 Huey Long’s brother Earl Long was finishing up a term as governor and hoped to retain power with an anointed successor while being elected Lt, Governor until he could run again.  Davis was called back to prevent that.  Despite a previous reputation as a relative racial moderate as the Civil Rights Movement swept across the South he reinvented himself as a strict segregationist for a bitter three-way Democratic primary.  Like George Wallace in Alabama, Davis refused to be “out niggered.”

In his second term Davis proved his segregationist credentials by creating the Louisiana State Sovereignty Commission, which operated from 1960 to 1967. It “espoused States rights, anti-communist and segregationist ideas, with a particular focus on maintaining the status quo in race relations. It was closely allied with the Louisiana Joint Legislative Committee on Un-American Activities.  In this term business interests, especially the gas, oil, and petrochemical industries had even more overt control over state government.  As in 1948 Davis came to the aid of national Democrats by offering tacit support to Presidents John F. Kennedy and Lyndon B. Johnson, to secure the state’s hold on pending offshore oil revenues.

Davis made one more attempt to return to power in 1971 in a crowded Democratic field, but his populist act was not fooling anybody any more.  He finished a pitiful fourth place in a special December run-off primary with only 11.8 % of the vote.

In 1972 he was said to be on George Wallace’s short list as a vice presidential running mate after Air Force General Curtis LeMay, who got the nod and former Governor Orval Faubus.

Davis died on November 5, 2000.  He had suffered a fall in his home some ten months earlier and may have had a stroke in his last days.  He was 101 years old.

No matter what you think of Davis, You Are My Sunshine is still a hell of a good song.

Posted by Patrick Murfin at 4:13 PM