Ar Hyd y Nos/ All Through the Night sung by Aled Jones, a mass Welsh male chorus, and Libera.

Way too much death and fear of death these days whether from the Coronaviurus epidemic of police violence against the Black community, people of color, and other marginalized and dehumanized targets.  We have to face and fight both. But we can really use some good news and hope as well like the birth of my Granddaughter Matilda Monoko Holmes yesterday.  How better to greet her than with on one of the loveliest lullabies ever sung—All Through the Night. 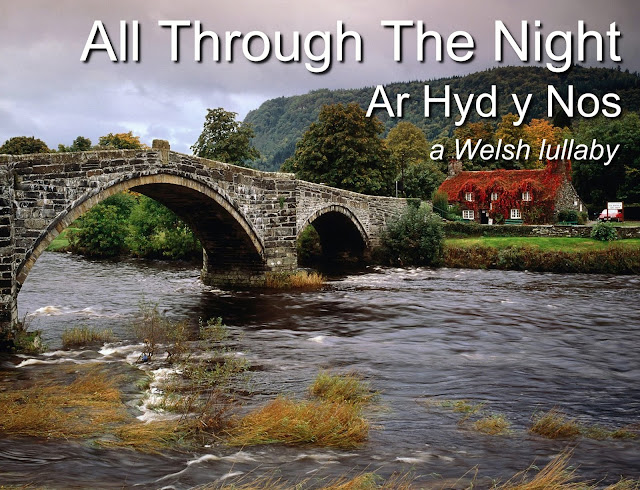 Ar Hyd y Nos—All Through the Night in English is a Welsh song sung to a melody that was first noted in Edward Jones’ Musical and Poetical Relics of the Welsh Bards  in 1784. The most commonly sung Welsh lyrics were written by John Ceiriog Hughes (1832-1887), and have been translated into several languages, including English , most famously by Sir Harold Boulton (1859–1935.) One of the earliest English versions, to different Welsh lyrics by John Jones, was by Thomas Oliphant in 1862.
The song is a perennial favorite popular with traditional Welsh male choruses, and is sung at festivals in Wales and around the world.
It is also sometimes considered a Christmas carol—Mary singing to the infant Jesus-- has been performed by many artists on Christmas albums, including Olivia Newton-John and Michael McDonald, and Cerys Matthews on her 2010 album Tir.

The version we are hearing today comes from a 2002 BBC program Songs of Praise from St David’s Hall in Cardiff.  It features a solo sung first in Welsh and then in English by Aled Jones, a native Welsh speaker and former child prodigy, backed with a traditional Welsh male chorus and  Libera, a Black gospel choir.

Posted by Patrick Murfin at 5:14 PM