Until recently Black Lives Matter/George Floyd/I Can’t Breath protests in McHenry County have had the streets and parks pretty much to ourselves.  Through most of June peaceful youth-led rallies and marches have brought hundreds, even thousands out in Woodstock, Crystal Lake, McHenry, Algonquin, Cary/Fox River Grove, Huntley, Harvard, and even tiny, rustic Richmond.  Counter protestors managed one under-attended event in Algonquin and individuals have heckled BLM protestors and buzzed events with flag-waving trucks shouting obscenities and threats.  They have made their presence known mostly by hate-filled comments to newspaper reports, on-line mouth frothing, and cyber-stalking harassment of identified BLM leaders and participants.

Now as Illinois opens up in Stage 4 response to the Coronavirus pandemic and perhaps believing that the local BLM movement is sputtering out a Back the Blue Motorcycle ride is scheduled for this Saturday, June 27.  Ostensibly in defense of police who they claim are under siege following nation-wide Black Lives Matter marches, rallies, and civil disruption.  But organizers are also critical of local municipal leaders and police chiefs who have not only been “soft” on our homegrown protestors, but have expressed solidarity with their cause, in some cases even taking a symbolic knee.  Statements by rally organizers have also made it clear they want to signal the BLM movement that they risk a possible violent backlash.
Although they claim to be non-partisan pro-Trump and Second Amendment are heavily promoting the event in their circles.  There will be no shortage of MAGA caps and Trump banners will be as common as Thin Blue Line flags.  There will not, however, be many “pussy” face masks which they regard as a radical/liberal plot.

According to the Northwest Herald:

Former Crystal Lake resident Joe Alger and Woodstock Harley-Davidson owner Doug Jackson organized the Back the Blue Ride in light of protests surrounding the Minneapolis police killing of Black man George Floyd.
“The goal of this ride is to show those that hold the Thin Blue Line that we stand with them and against anarchy,” Alger said.
Throughout the years, Alger has participated in more than 45 rides for soldiers killed in action, he said…
… “I don’t believe there’s systemic racism in this country,” Alger said.
The bikers who have long made Woodstock Harley-Davidson their unofficial headquarters are not outlaw gang members.  Most are middle-age and older white guys with comfortable incomes—the folks who can afford costly Hogs.  They have gained local respect for their escorts of funerals of U.S, Troops and welcome home celebrations and for charities like the Marine Corps’ Toys for Tots campaigns. But any are also in Trump’s core base and the Resident has suggested several times that he believes that bikers will “ride to the rescue” to prevent a vast Democratic/liberal/alien/socialist plot to “steal” his presidency.  Like some “fine people” in white nationalist groups, Trump apparently thinks that bikers will be his Brown Shirts.  At least some of the riders on Saturday will share that fantasy.

Most local municipal leaders have stayed clear of endorsing the ride while promising to respect the rider’s freedom of speech.  But McHenry Mayor Wayne Jett was an early and enthusiastic backer.  Not only did he endorse the ride, but he ordered Back the Blue yard signs which he was selling for $5 a pop.  After McHenry BLM leaders reached out to him, Jett changed his tune.  He now says he also shares the vision of police reform community leaders are pressing.  He is now also offering and selling Black Lives Matter yard signs and says that money from the sale of both signs will go to support the work of Youth and Family Services of McHenry County which offers services to Latino and other minority youth.  Jett also says he will attend a BLM rally in McHenry on Saturday as well as checking in with the bikers.  We will see how well he performs that juggling act.
According to a Back the Blue organizer:
Riders will meet at 9:30 a.m. for registration at the Woodstock Harley-Davidson, 2235 S. Eastwood Drive. Anyone with a street-legal vehicle is welcome to join and fly their blue line or American flags, Alger said. Departure will begin at 11 a.m. with plans to visit the Woodstock, McHenry and Crystal Lake police departments.
“We will ride through the downtown area of Crystal Lake, McHenry and Woodstock with brief stops at each police department,” Alger said. “We will end up back at Woodstock Harley for hot dogs and fun.”
Alger said he won’t enforce the use of masks or other COVID-19 precautions, noting that “it’s not [his] job to police other people.”
Pointedly saying that they are not counter-protesting or opposing the Back the Blue ride, BLM leaders in McHenry, Crystal Lake, and Woodstock are planning on new rallies to back their calls for police reform and continue the conversation in McHenry County about white privilege and systematic racism.

Luis Eric Aguilar, a McHenry youth leader explained:
I met with Mayor Wayne Jett and the McHenry PD today [June 24] to go over our peaceful protest and demonstration planned for this Saturday. The Mayor has agreed to attend and to listen! Furthermore, we are aware of the already planned 'Back the Blue Ride' and the Mayor and I agree that both groups are there to express their support for the PD and the community and that neither was created in counter of the other. This Saturday will be a celebration of the 1st amendment rights given to all Americans.
I may even have friends in that ride and I will still encourage them to join us in the conversation. Education is the first step. We may not agree on everything but across the country we are witnessing an awakening of knowledge towards racial justice.
One day, we will all look back at McHenry and celebrate its history. Our kids will have their generation issues and our job is to teach the right approach to creating actual and effective change.
Although the exact plans in Woodstock have not been posted as of this writing, Crystal Lake will have a rally from 10:30 to 12:30 at Veteran’s Acers on Walkup north of Route 176.  This will be a rally with no march planned.  The Back the Blue Ride will probably pass the park on its route.
The Crystal Lake call says:

This is a peaceful, family-friendly, coordinated event with McHenry, Crystal Lake, and Woodstock. It is a response to the “Back the Blue” ride that begins/ends at Woodstock Harley Davidson and makes brief stops at each of these police stations.
The originator of that event states that there is no such thing as systematic racism.
The purpose of our protest is to assert three clear messages. Everyone needs to know these messages. 1) Black Lives Matter, 2) systemic racism exists in nearly all facets of society, 3) it also exists in the police force which is why there is an important public discourse regarding defunding the police. 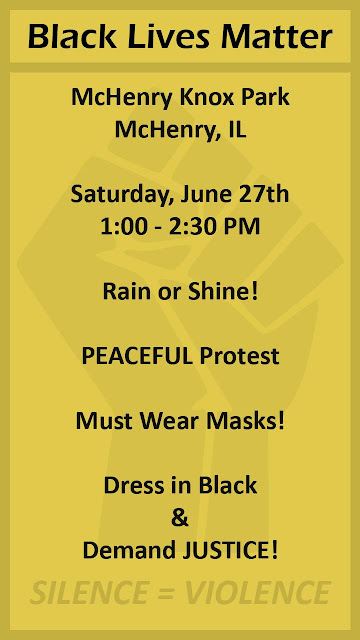 In McHenry a rally will be held between 1 and 2:30 pm at Knox Park, 333 Knox Drive.
Participants at Saturday’s BLM rallies are asked to wear masks, practice social distancing as much as possible, and wear black.  I would add that those of us who are older and white respect the outstanding leadership of our youth, Blacks, other People of Color, and other marginalized targeted communities like LGBTQ.

Posted by Patrick Murfin at 7:15 AM