Jim Scott, folk singer, composer and musical activist, returns to the Tree of Life Unitarian Universalist Congregation, 5603 Bull Valley Road in McHenry, for a special tribute to Pete Seeger on Friday, October 28 at 7:30 pm.
Scott, who last performed at Tree of Life for the Cabaret Church arts festival in the spring of 2015, has made it his business for three decades to create and perform music that celebrates the earth. His songs and poetry have inspired and educated audiences around the world. He has developed presentations for every age group and crafted songs that sensitize his listeners to the beauty of the Earth, teaching principles of ecology in memorable verses.
Pete Seeger, a lifelong activist and defender of the Earth as well as a beloved American folk singer was a natural inspiration.  Scott performed with Seeger and Peter Yarrow at the Great Peace March for Global Nuclear Disarmament in 1986 as well as on other occasions.  Seeger called him, “some kind of a magician.”

As a member of the Paul Winter Consort and as a solo performer, Scott has recorded 18 albums including the highly acclaimed Missa Gaia/Earth Mass, A Concert for the Earth (Live at the UN), Big and Little Stuff: Songs for Kids, and Body and Soul, a soundtrack for the documentary series on PBS Television.  He is also an active Unitarian Universalist who as Co-chair of the Seventh Principle Project helped to create the Green Sanctuary program and accompanying handbook for building an ecological/spiritual awareness in church congregations.
Scott has performed or toured with Joan Baez, Jackson Browne, Tom Chapin, Tracy Chapman, John Denver, Dan Fogelberg, Joni Mitchell,  Holy Near, Odetta, and 10,000 Maniacs.
His eco-anthems and modern hymns like Gather in Spirit have been included in the U.U.A. hymnal Singing the Living Tradition and a regular part of many Sunday services.  In addition to the songs and stories of Pete Seeger, Scott will perform some of these songs as well.
Tree of Life is requesting a sliding scale donation of between $12 and $20 depending on the ability to pay.  All proceeds go to the work of the congregation.
Scott’s CDs will be available for sale after the concert. 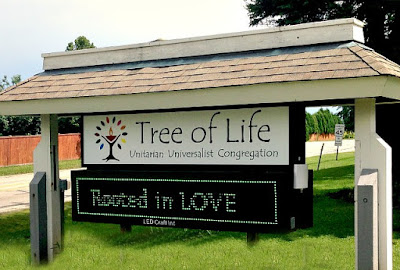