The Bard of a Generation Pulls Down a Nobel 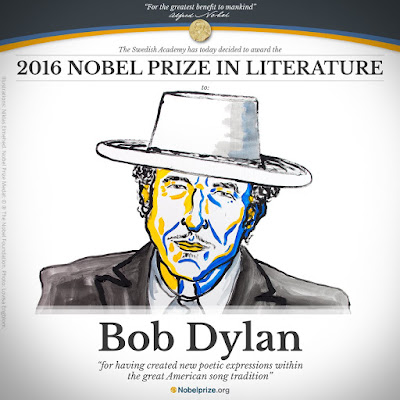 A lot of us woke up this morning to the startling news from Stockholm that Bob Dylan has won the Nobel Prize for Literature which in recent years has been noted for mostly honoring writers from the Third World and emerging voices.  The last American to win the most prestigious award in the world was novelist Toni Morrison 23 years ago in 1993.  Although Dylan’s name had been publicly proposed it was a stunning surprise when the Swedish Academy made the announcement—the first ever to an artist whose principle body of work was song lyrics.
The citation for the award declared that Dylan earned the prize “for having created new poetic expressions within the great American song tradition,” One member of the selection panel compared his work to Homer and Sappho—classic poets whose work was meant to be performed rather than read off the page.
The news this morning put a smile on my face and a spring in my step.  It was a tonic for a week befouled by Donald Trump.  I even felt validated personally and for my generation for having recognized this genius long ago.
To celebrate, I am recycling this post from March of 2015 about Dylan’s breakthrough first LP.


On March 19, 1962 Bob Dylan, the self-titled first album of 21 year old former Robert Zimmerman hit the stores.  Outside of the immediate precincts around Greenwich Village the Columbia Records LP landed with a thud.  Only 2,800 copies were sold nationwide in the first year.  Recording industry wise asses were deriding it as Hammond’s Folly and predicting the fall from grace at the label by producer John Hammond.  Luckily for him, despite the dismal sales the record actually turned a tiny profit thanks to its incredibly low cost to produce in just two, two hour sessions with no side musicians.
That the record was made at all, and on the biggest, most important label in the country managed under the steely eye of Columbia A&R Director Mitch Miller was a minor miracle.
Dylan—the name was brand new and stolen from poet Dylan Thomas—blew into the Greenwich Village folk scene at the age of 19 in January, 1961 shortly after dropping out of his freshman year and the University of Minnesota.  He had already reinvented himself personally and musically at least once.  In high school had idolized Little Richard and Elvis Presley, slicked his hair back in a greaser’s DA, and played electric guitar in garage bands.  But he had spent most of his time during his aborted college career mining the extensive folk music collection of a friend—he may have actually stolen much of it—especially the Folkways field recording of blues and hillbilly artists.  Then he discovered Woody Guthrie.
The trip to New York was supposed to be a pilgrimage to meet Woody, then in a sanitarium in the advanced stages of the Huntington’s chorea that would kill him.  His hair now an unruly curly mop topped with a little corduroy cap, Bob went to the hospital on several occasions playing music for the man who on some days could barely acknowledge his presence.
Dylan fell easily and quickly into the Village’s lively folk music scene.  The legend that he would later carefully cultivate was that he was something of an outsider and loner, a rebel like Marlon Brando in the Wild Ones against “what ya got.”  In point of fact seems to have warmly adopted the young ragamuffin.  Guthrie’s disciple Ramblin’ Jack Eliot was the first to take him under his wing.  Soon he was playing basket houses and hobnobbing with Dave Van Ronk, Fred Neil, Odetta, the New Lost City Ramblers, and the Clancy Brothers and Tommy Makem.  They would invite him to join with them for on stage jams and take him home with them at night and spend hours sharing songs and teaching him the fine points of guitar and harmonica.
Soon Dylan had a pretty girl friend, Suze Rotolo whose sister Carla was an assistant to famed folklorist Alan Lomax and who made her large record collection available to him to mine for more material.  Dylan was a sponge.  He soaked it all up.  “I only had to hear a song once or twice to learn it,” he said.
Dylan became especially close friends with a young poet and writer, Richard Fariña who introduced him to his then wife, Carolyn Hester, one of the reigning queens of the folk scene.  On September 14, 1961 they gathered in Hester’s apartment to rehearse for an album she was preparing.  Dylan was blowing mouth harp.  Producer Hammond turned up to check on progress and was impressed with Dylan.  He hired him on the spot to play on Hester’s album.
After sitting in on the recording session on September 29, Dylan opened a two week stint at Gerde’s Folk City, billed behind The Greenbriar Boys.  That engagement got his first rave reviews in the New York Times.  Impressed, Hammond called Dylan into his office and offered him the standard Columbia five year recording contract.  Dylan couldn’t sign on the dotted line fast enough.  His dream was coming true.
Hammond first had to get the contract approved by Mitch Miller, not a fan of folk music that wasn’t Burl Ives.  Miller was skeptical but deferred to the judgment of one of his most successful producers.  Studio time for the first album was booked for late November.
Dylan spent the next weeks frantically searching Carla Rotolo’s and other’s record collections and going over song he had picked up in those late night sessions.  His set list in the clubs was still short and he did not yet have a lot of original material.  Besides, he wanted to cast himself as an authentic folk musician preserving the best of traditional American music in the tradition of those Folkways records he loved.


The recording sessions were held on November 20 and 21.  Dylan cut 17 tracks accompanying himself on guitar and harmonica.  Despite this simple set up, Hammond reported that Dylan was “the most undisciplined artist” he had ever worked with and hard to record because he “popped every p, hissed every s, and habitually wandered off mike...Even more frustrating, he refused to learn from his mistakes.”  And he generally refused to do more than one take.  Singing the same song twice bored him.  Hammond was left to perform what limited technical wizardry was available in those days of monaural recording.
In the end, 11 songs made it to the album, only two of the Song for Woody and Talkin’ New York Blues which was inspired by Guthie’s Talkin’ Dustbowl Blues, were originals.  The rest were an eclectic mix of blues, country, and folk.  Dylan claimed arrangement credit for In My Time of Dyin’, The Man of Constant Sorrows (a Carter Family staple), Pretty Peggy-O (picked up from Liam Clancy), Gospel Plow, and Freight Train Blues by John Lair.
The inclusion of two songs caused some hard feelings between Dylan and those who had graciously accepted him although he gave arrangement credits in both cases.  He learned the version of Please Let Me File You Down from Boston Folkie Eric Von Schmidt for whom it was a signature song.  And Dylan lifted Van Ronk’s version of The House of the Rising Sun before the Mayor of McDougal Street could record it himself.
The album was rounded out with Jesse Fuller’s Your No Good, Highway 51 by Curtis James, Bukka White’s Fixin’ to Die, and Blind Lemon Jefferson’s See That My Grave is Kept Clean.


The cover of the album featured Dylan in his cap and in a fleece-lined jacket holding his guitar. The image was flipped so the guitar head would not obscure the Columbia logo.
After release when sales lagged, both Dylan and Hammond professed to be disappointed in the album.  But it must be said that it was exactly the record Dylan set out to make.
Despite the setback, Dylan was growing fast as an artist.  He was moving up to top billing at Village coffee houses and clubs.  He was expanding his repertoire and improving his skills, particularly in bottleneck style guitar playing.
Under the influence of Suze Rotolo, an activist with SNCC and the anti-nuclear group SANE, Dylan began writing more political songs.  Peter. Paul and Mary and other top folk acts began to cover his songs in concert and on LPs including the iconic Blowin’ in the Wind. Joan Baez famously brought him on stage with her at the Newport Folk Festival and brought him along on her tours, boosting his career, and then replaced Rotolo in his bed.  Pete Seeger took an interest in him and encouraged his move to protests songs.  Still under contract to Columbia, he recorded material for the Broadside Magazine record label under the thin cover name Blind Boy Grunt.


Dylan was emerging as a real star and Columbia gave him another shot.  Dylan and Hammond had fallen out over the failure of the first album so the young Black jazz producer Tom Wilson was brought in.  The result was Freewheelin’ Bob Dylan with the iconic photo of the singer with Rotolo in the streets of the Village on the cover.  Released in May of 1963 it included the classic protests songs that defined Dylan’s early career.
He had re-invented himself not just as a folk singer, but as poet/bard voice of his generation.  Over his amazingly long and still thriving career, Dylan, ever the chameleon, would reinvent himself a dozen or more times.
As for that first album, well, with rising fame came respectability.  It sold steadily, if unspectacularly, to hard core Dylan fans for years.  Issued in Britain in 1965, it rose to #13 on the album charts there in the midst of the era of Beatlemania. Critics who ignored or panned it first time out, revisited it and found much merit in it.  It was re-issued as part of a box set of Dylan’s nine mono records in 2010 and in 2013 as a stand-alone CD Hoodoo Records with an additional 12 tracks taken from the B side of a single and radio performances contemporary to the original record.
One more thing.  Thousands more Dylan fans claim to have run out and bought that first album than actually did.