Amanda Howland for the 6th Congressional District
Peter Roskam, the man who beat Tammy Duckworth in her first run for Congress, could be the poster boy for entrenched incumbents.  Since that he has trounced four Democratic challengers by wide margins despite having his district dramatically redrawn.  In 2014 he won by the widest margin yet—67% to 33%—against the largely symbolic candidacy of retired postal worker Michael Mason.
Despite the national attention he received for his contest with Duckworth—probably the most watched race of 2006, Roskam quickly became a classic back bencher.  Very conservative, he was never quite a Tea Partier.  He was elected Chief Deputy Majority Whip, the fourth ranked GOP leadership post, in the 112th Congress, but was ousted in the Tea party putsch in the next Congress.  Since then he has survived by keeping his head down and loyally following leadership.  He currently serves on the Ways and Means Committee and as Chair of its Subcommittee on Oversight where he occasionally draws attention for hectoring Obama administration officials.  He was also on the Benghazi witch hunt special committee.
Roskam is known as a reliable water carrier for the National Rifle Association (NRA) and gun lobby, opposition to Obama Care, calling climate change “junk science”, and as a neo-con hawk on Iraq and against the Iranian nuclear deal.
Amanda Howland represents a break from all of that obstructionism Republican dogma. 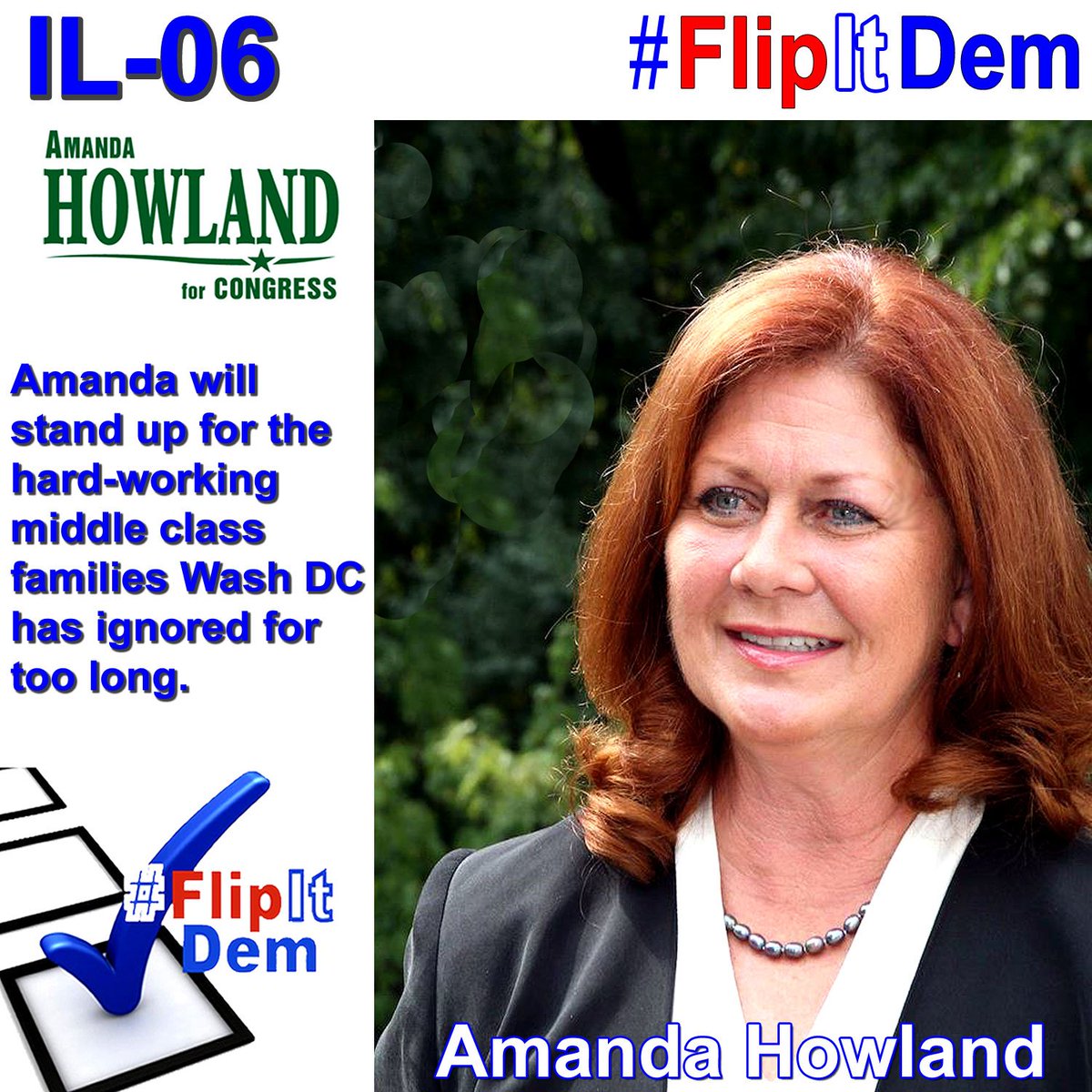 Howland, of Lake Zurich in neighboring Lake County is a former teacher and education administrator who is now an attorney specializing in protecting the rights of people in both civil rights cases and employment law.  She has long been active in her community in numerous capacities, including being a high level gymnastics judge.  Howland serves on the Board of Trustees of The College of Lake County and was formerly Chair of the Board.  In 2012 she ran for the 24th District Illinois Senate seat.
Howland’s varied life experience has made her especially interested in education.  Still paying off student loans from her return to law school in mid-career she is especially concerned about the burden of loans and a whole generation.  As a civil rights advocate she is a strong defender of a woman’s right to choose and an opponent of all attempts to restrict or make difficult to access abortion services and contraception.  She supports the Equality Act aimed at strengthening civil rights across the board.
Howland stands for a tax system that protects the middle class, and raises enough money for vital infrastructure improvements and educational opportunities like Pell Grants by making sure subsidies to billion dollar corporations are slashed and the wealthy pay their fair share.  She will protect Social Security from Republican schemes slash benefits, dismantle it, or shovel money to Wall Street in risky privatization.
He opponent is a well known climate change denier but Howland pledges to support ending oil and gas subsidies and implementing the Paris climate change agreement.
Polls show that item by item the American people—even Republicans—support this agenda.  Howland has to get the word out.
Although her race is difficult, Howland good get a major boost if women turn out in big numbers to vote against Donald Trump. 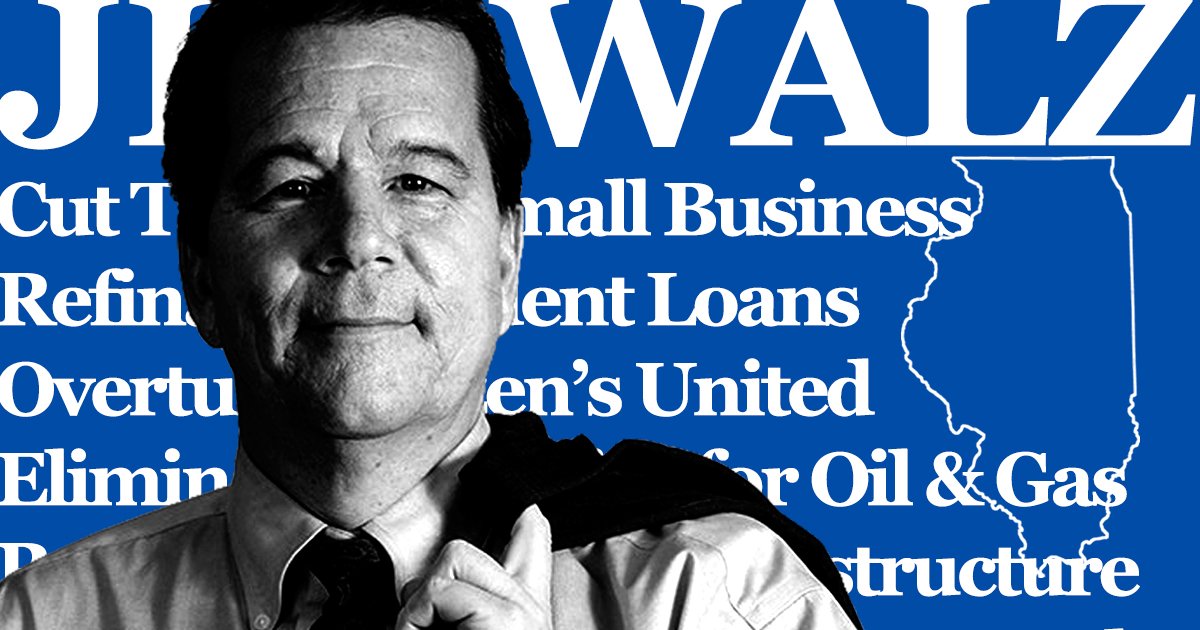 You wouldn’t think that folks would line up for what pundits said was a suicide mission.  But three citizen activists ran in the Democratic primary for the 14th Congressional District for a crack at Republican incumbent Randy Hultgren.  Jim Walz of Gurnee was the walk-away winner of the primary based on a solid progressive platform.
Walz is an outside sales representative to a major wholesale company with deep ties to his community and a call to service.  He was elected to the Warren Township High School District #121 School Board.  Both of his children attended and graduated from the high school. Among his accomplishments on the board was advocating the addition of solar arrays at both campuses of the school, convincing the Board to sign a letter of intent to install them.
Walz dipped into activism in 2012 when he worked to the Move to Amend advisory referendum on the Warren Township ballot.  The referendum supported an Amendment to the U.S. Constitution to overturn the disastrous Citizens United decision of the Supreme Court.  The question passed by a 2 to 1 margin, a testimony to his tireless work.
That experience sparked a deeper interest in tackling progressive reform blocked by the Republican House.  He became a Democratic precinct committeeman in Lake County and after consultation with his family decided to enter the 2016 Congressional Race.
Walz’s solidly progressive platform resonated with many Bernie Sanders supporters.  His program includes limiting the influence of dark money in politics by standing on the principles that corporations are not people and money is not speech.  He pledges to protect Social Security from right wing attack and insure its continued solvency by removing the payroll cap for incomes over $500,000 per year, to broaden the base of this tax and make it fairer and more evenly distributed.  He proposes expansion of programs to assist and protect veterans and advocates tax credits to encourage the employment of veterans.
Despite taking zero dollars from big PACs and struggling with small donor fundraising, Walz has conducted a vigorous campaign relying on door to door contact with voters and public appearances in parades, forums, and community events across the district.  But he could use your help.


Walz face Randy Hultgren who came to the House in the 2010 election by defeating Democratic incumbent Bill Foster—who later returned to Congress from another District.  Redistricting put Tea Party ranter Joe Walsh into the 14th District.  Walsh considered challenging Hultgren, but was muscled aside by state GOP heavyweights and deep pocket donors.  Walsh was forced to run in the drastically redrawn 8th District where he was a sacrificial lamb to Tammy Duckworth.
Hultgren fared better.  He beat retired health care administers Dennis Anderson, who ran credible but cash strapped campaigns in 2012 and ’14.
In Congress Hultgren introduced legislation to gut the Dodd–Frank Wall Street Reform and Consumer Protection Act by allowing banks to use risky financial derivatives known as Swaps as a Hedge tool.  He further evidenced his fealty to corporate greed by signing the Americans for Prosperity pledge to oppose Global warming legislation that would raise any taxes.  He attacked the Americans for Disabilities Act with the benign sounding Hire More Heroes Act that would have allowed employers to exclude veterans receiving health insurance from the Department of Defense or the Department of Veterans' Affairs from their list of employees which would allow many smaller companies to dodge the 50 full-time employees line that would require them to provide their employees with healthcare.  Needless to say Hultgren also voted for all of the scores of attempts to repeal Obama care.
Hultgren is intensely hostile to public education and leads the Congressional drum beat for special privileges for home school families.
Hultgren is as nasty as any House Republican and sorely needs to be retired from Congress.  Help Jim Walz do it.