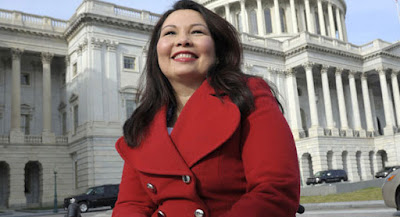 
Increasingly deep blue Illinois has been represented in the United States Senate for six years by a North Shore Republican, Mark Kirk.  He faces a challenge from Congresswoman Tammy Duckworth. It has become the hottest and most expensive race this year as Democrats drive to take back the Senate and give the likely next President, Hillary Clinton, much needed breathing room in critical future Supreme Court nominations and as a bulwark against the House of Representatives which will probably remain in troglodyte Republican hands.
Both candidates are disabled and frequently, although not exclusively, in wheel chairs and have been lauded for their courageous recoveries and are thus sympathetic figures.  Kirk suffered a devastating stroke in 2012 which left him temporarily paralyzed and affected his speech.  He was unable to attend Senate sessions or committee hearings for nearly a year.  He was reported to keep up with pending legislation and perform constituent services from rehabilitation and at home, although most of the work was done by his staff.  After emergency brain surgery and intensive physical and speech therapy, he returned to the Senate in 2013 and announced his intention to run for reelection a year later.
Today he speaks clearly, walks with a leg brace, and has limited use of one arm.  He still tires easily and frequently uses a wheel chair, as he did in his joint appearance with Duckworth recently at the Chicago Tribune Editorial Board interview.
Duckworth famously suffered critical injuries when the Black Hawk helicopter she was co-piloting was shot down in Iraq in 2004.  She lost her right leg near the hip, her left leg below the knee, and her right arm was almost completely destroyed but ultimately saved.  Captain Duckworth was the first female double amputee of the war.  While recuperating at Walter Reed Army Medical Center in Washington, she was promoted to Major and received her first public attention in a 60 Minutes segment on her courageous recover and rehabilitation.  Senator Bob Dole, the former Republican Presidential candidate and himself a disabled veteran was so impressed with her that he dedicated his autobiography, One Soldier’s Story, to her.
Fitted with prosthetic limbs Duckworth walks with the aid of a crutch, but like Kirk, she frequently uses a wheelchair and was in one for the Tribune appearance.
Duckworth got a medical waiver, and continued to serve in the Illinois National Guard in an administrative capacity.  She retired as a Lt. Colonel in 2014.


But she is not the only veteran in the race.  Kirk served as a Naval Reserve intelligence officer.  He was called to active duty during the NATO air campaign during the 1999 Kosovo War in the former Yugoslavia.  His unit, based in Italy, coordinated American bombing missions and received the Vice Admiral Rufus L. Taylor Award by the National Military Intelligence Association.  Later, he served three brief tours during the Iraq War, and flew as an observer in one reconnaissance flight over the war zone.
Lt. Commander Kirk made much of his Navy experience in his first run for Congress in 2000 and later leveraged it to a seat on the Senate Intelligence Committee.  But Kirk repeatedly either exaggerated or lied about his service—and was repeatedly caught and forced to retract and apologize.  He turned the unit award into a personal “Intelligence Officer of the Year” award and made it look like an official Navy commendation.  He made up a story of coming under enemy fire on his sole Iraq flight.  During his active tours, Kirk was also disciplined twice for conducting political activity on duty.  The Senator officially retired from the Navy Reserve as a Commander in 2013 following his stroke.


Duckworth has finally mended fences with most progressive activists.  Her blistering grilling while serving on the House Oversight and Government Reform Committee of Strong Castle CEO Braulio Castillo for his fraudulent use of a disabled veteran set-aside to gain a $500 million contract became a viral sensation on social media.
As a Senate candidate Duckworth has become an outspoken advocate of positions dear to the heart of progressives and supporters of Bernie Sanders including opposition to the Trans-Pacific Partnership (TPP) trade agreement, advocacy for a free college tuition program, sensible gun legislation, immigration reform including a clear path to citizenship, and expanded acceptance of refugees.  She remains a vigorous supporter of women’s rights and choice and is the leading voice of the disabled in Congress.
Duckworth is clearly doing something right.  A poll released earlier this week by the respected Paul Simon Institute at Southern Illinois University showed her widening her lead over Kirk and is now ahead 48 % to 34 %.  The Huffington Post average of major polls now shows her leading by a margin of 45.6 % to 36.6%.
Way to go, sister!
By the way, I should note that the Green Party candidate is a McHenry County local.  Scott Summers of Harvard is a former McHenry County College Trustee who has run for local and county offices as both a Green and a Democrat.  Since Duckworth has gained the support of both the Sanders and Clinton forces in the Democratic Party, Summers will get even less of a bump than Jill Stein is getting at the top of the ticket.  Expect him to finish a poor 4th in the race in the very low single digits behind the Libertarian who will be fattened by anti-Trump Republicans.