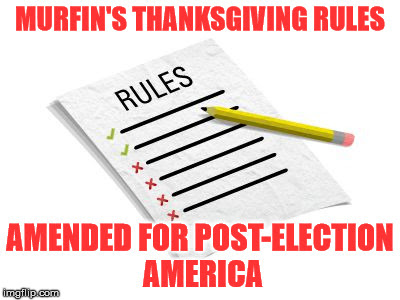 I have published my handy Murfin’s Thanksgiving Rules annually for the last few years.  A lot of folks say they found it useful and inspiring.  A few have found it a tad heavy on the snark.  Some of the home hospitality divas, foodies, Martha Stewart wanabees, and both uptight WASPS and self-righteous food purists of various stripes have been offended.  Good.  The rules weren’t meant for the likes of you but for the rest of us with sloppy homes, messy lives, limited time and income.
This year in the wake of the election I am amending the Rules because many families and gatherings of friends will be under extreme stress as passionate devotees of vastly different political and social beliefs try to break bread together and preserve relationships without stabbing each other with the carving knife.  Indeed in some cases this will be impossible.  If an actual riot does not break out at the dinner table, when the screaming and cursing subside some relationships will be irrevocably shattered and sundered.  It is sad, but it will happen and it won’t feel like a Saturday Night Live skit.  It will be utterly devastating to all concerned. 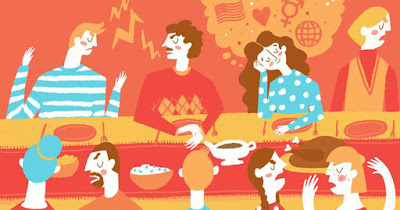 But most of us, thankfully, will fall short of that disaster, or can by closely adhering to the to the following supplemental Murfin Rules.

Posted by Patrick Murfin at 3:35 AM