Ernesto Cardenal, the renowned poet and Roman Catholic priest who became an icon of revolutionary verse in Nicaragua and Latin America died on March 1 this year in Managua at age 95..  A champion of  Liberation Theology he was publicly shamed by Pope John Paul  II while he was serving as Minister of Culture in Daniel Ortega’s first Sandanista government and was suspended from the priesthood in 1983.  He was finally reinstated by Pope Francis in February 2019 36 years later.

Cardenal was born on January 20, 1925 in Granada, Nicaragua to a wealthy family. He attended both the University of Mexico and Columbia University in New York City he also  studied with Trappist, poet, and philosopher Thomas Merton in Gethsemani, Kentucky.  He finished his studies in Cuernevaca, Mexico, where he was ordained in 1965.
By that time he was fully engaged in Liberation theology and an opponent of the harsh, repressive U.S. backed dictatorship of Anastasio Somoza.  He founded a community of peasants, poets, and painters in 1966 on the Solentiname Islands in Lake Nicaragua.  Cardenal supported the insurgency of the Sandinistas through a long and bloody revolutionary struggle while he was becoming noted for his poetry. Cardenal recognized that poetry and art are closely tied to politics, and used his poetry to protest the encroachments of outsiders in Nicaragua and to promote his own brand of Christian Marxism. When the Sandinistas finally came to power in 1979 he was an obvious prestige choice as Minister of Culture and his brother, Fernando  was named Minister of Education.  During the same years he co-founded the Casas de las Tres Mundos (Houses of the Third World), an international literary and cultural organization  based in Nicaragua.
The Sandinista government fell from power in 1988 after elections brought a U.S. backed conservative government to power.  Cardenal never held public office again but remained a critical voice.  He traveled extensively reading his poems.
But when Ortega returned to the Presidency in 2007, Cardenal denounced what he called the beginning of a family dictatorship. And in 2018, when anti-government protests broke out that posed the biggest challenge to Ortega’s increasingly authoritarian hold on power, he quickly aligned himself with the opposition. “What we want is for there to be a different government, a democratic republic,” he said in a handwritten message of support, adding that dialogue with the Ortega camp would be useless.

Cardinal’s opposition led to personal and legal harassment by the government which also tried to erase him from history.  In 2015, when Cardenal turned 90, he was feted in Mexico  where he had lived and studied theology as a young man but the Sandinista government had nothing but silence for a man it viewed as a turncoat.

The poems of his earlier revolutionary period were collected in Zero Hour and Other Documentary Poems published in English in 1980.  More recent work has included Golden UFOs: The Indian Poems/Los ovnis de oro: poemas indios  in 1992,  Cosmic Canticle in 2002, Pluriverse: New and Selected Poems in 2009 and Origin of the Species and Other Poems in 2011which examined science in the context of religion. 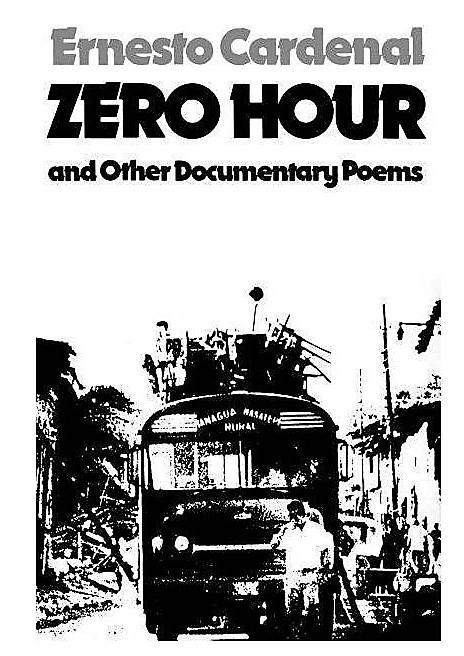 
Tropical nights in Central America,
with moonlit lagoons and volcanoes
and lights from presidential palaces,
barracks and sad curfew warnings.
“Often while smoking a cigarette
I’ve decided that a man should die,”
says Ubico smoking a cigarette . . .
In his pink-wedding-cake palace
Ubico has a head cold. Outside, the people
were dispersed with phosphorous bombs.
San Salvador laden with night and espionage,
with whispers in homes and boardinghouses
and screams in police stations.
Carías’ palace stoned by the people.
A window of his office has been smashed,
and the police have fired upon the people.
And Managua the target of machine guns
from the chocolate-cookie palace
and steel helmets patrolling the streets.


The campesinos of Honduras used to carry their money in their hats
when the campesinos sowed their seed
and the Hondurans were masters of their land.
When there was money
and there were no foreign loans
or taxes for J.P. Morgan & Co.,
and the fruit company wasn’t competing with the little dirt farmer.
But the United Fruit Company arrived
with its subsidiaries the Tela Railroad Company
and the Trujillo Railroad Company
allied with the Cuyamel Fruit Company
and Vaccaro Brothers & Company
later Standard Fruit & Steamship Company
of the Standard Fruit & Steamship Corporation:
the United Fruit Company
with its revolutions for the acquisition of concessions
and exemptions of millions in import duties
and export duties, revisions of old concessions
and grants for new exploitations,
violations of contracts, violations
of the Constitution . . .
And all the conditions are dictated by the Company
with liabilities in case of confiscation
(liabilities of the nation, not of the Company)
and the conditions composed by the latter (the Company)
for the return of the plantations to the nation
(given free by the nation to the Company)
at the end of 99 years . . .
“and all the other plantations belonging
to any other persons or companies or enterprises
which may be dependents of the contractors and in which
this latter has or may have in the future
any interest of any kind will be as a consequence
included in the previous terms and conditions . . .”
(Because the Company also corrupted prose.)
The condition was that the Company build the Railroad,
but the Company wasn't building it,
because in Honduras mules were cheaper than the Railroad,
and “a Gongressman was chipper than a mule,”
as Zemurray used to say,
even though he continued to enjoy tax exemptions
and a grant of 175,000 acres of the Company,
with the obligation to pay the nation for each mile
that he didn’t build, but he didn't pay anything to the nation
even though he didn't build a single mile (Carías is the dictator
who didn't build the greatest number of miles of railroad)
and after all, that shitty railroad was
of no use to the nation
because it was a railroad between two plantations
and not between the cities of Trujillo and Tegucigalpa.


They corrupt the prose and they corrupt the Congress.
The banana is left to rot on the plantations,
or to rot in the cars along the railroad tracks
or it's cut overripe so it can be rejected
when it reaches the wharf or be thrown into the sea;
the bunches of bananas declared bruised, or too skinny,
or withered, or green, or overripe, or diseased:
so there’ll be no cheap bananas,
or so as to buy bananas cheap.
Until there’s hunger along the Atlantic Coast of Nicaragua.
And the farmers are put in jail for not selling at 30 cents
and their bananas are slashed with bayonets
and the Mexican Trader Steamship sinks with their barges on them
and the strikers are cowed with bullets.
(And the Nicaraguan congressmen are invited to a garden party.)
But the black worker has seven children.
And what can you do? You've got to eat,
And you've got to accept what they offer to pay.
24 cents a bunch.
While the Tropical Radio Subsidiary was cabling Boston:
"We assume that Boston will give its approval to
the payment made to the Nicaraguan congressmen of the majority
party
because of the incalculable benefits that it represents for
the Company."
And from Boston to Galveston by telegraph
and from Galveston by cable and telegraph to Mexico
and from Mexico by cable to San Juan del Sur
and from San Juan del Sur by telegraph to Puerto Limón
and from Puerto Limón by canoe way into the mountains
arrives the order of the United Fruit Company:
“United is buying no more bananas.”
And workers are laid off in Puerto Limón.
And the little workshops close.
Nobody can pay his debts.
And the bananas rotting in the railroad cars.
So there’ll be no cheap bananas
And so that there'll be bananas cheap,
19 cents a bunch.
The workers get IOUs instead of wages.
Instead of payment, debts,
And the plantations are abandoned, for they’re useless now,
and given to colonies of unemployed.
And the United Fruit Company in Costa Rica
with its subsidiaries the Costa Rica Banana Company
and the Northern Railway Company and
the International Radio Telegraph Company
and the Costa Rica Supply Company
are fighting in court against an orphan.
The cost of derailment is $25 in damages
(but it would have cost more to repair the track).


And congressmen, cheaper than mules, Zemurray used to say.
Sam Zemurray, the Turkish banana peddler
in Mobile, Alabama, who one day took a trip to New Orleans
and on the wharves saw United throwing bananas into the sea
and he offered to buy all the fruit to make vinegar,
he bought it, and he sold it right there in New Orleans
and United had to give him land in Honduras
to get him to break his contract in New Orleans,
and that's how Sam Zemurray abbointed bresidents in Jonduras.
He provoked border disputes between Guatemala and Honduras
(which meant between the United Fruit Company and his company)
proclaiming that Honduras (his company) must not lose
"one inch of land not only in the disputed strip
but also in any other zone of Honduras
(of his company) not in dispute . . ."
(while United was defeating the rights of Honduras
in its lawsuit with Nicaragua Lumber Company)
until the suit ended because he merged with United
and afterward he sold all his shares to United
and with the proceed of the sale he bought shares in United
and with the shares he captured the presidency of Boston
(together with its employees the various presidents of Honduras)
and he was now the owner of both Honduras and Guatemala
and that was the end of the lawsuit over the exhausted lands
that were now of no use either to Guatemala or Honduras.


—Ernesto Cardenal
Translated by Donald D. Walsh
Posted by Patrick Murfin at 6:14 AM