I first heard of Shari Wagner last year when Sue Rekenthaler used her poem The Farm Wife Turns Off the TV Evangelist as an opening chalice lighting for a Tree of Life U.U. Congregation Social Justice Team meeting.  It was an apt pick for Sue who is a hard working vegetable farmer with her husband as well as an accomplished poet herself.  I was impressed by the choice and determined to find out more about the author.
It turns out that Wagner was Indiana’s fifth Poet Laureate from 2016 to 2017 and is the author of three books of poems: The Harmonist at Nightfall: Poems of Indiana, Evening Chore and The Farm Wife’s Almanac.  She lived the life she writes about and embraces not only memoir pieces of farm life, but work inspired by Indiana history, and her love of nature and rural life.  But she is not the reflexive conservative you might suspect from a writer with official approbation in a deeply red state.  She has a social justice view point nurtured by her education at Goshen College, a Mennonite school and cross cultural  experiences in Somalia, Kenya, Haiti, and Honduras as well as domestically with the with the Clifton-Choctaw of Louisiana.
She was born in the Mennonite community of Goshen, Indiana and grew up near Markle, a small town along the Wabash River, in Wells and Huntington Counties.  Her father, Dr. Gerald Miller, was a family practitioner and her mother, Mary Mishler Miller,  contributed her leadership skills to  many community projects such as editing the town’s monthly newspaper and planning the annual town festival.   Later she and her father co-wrote Making the Rounds:  Memoirs of a Small-Town Doctor about the healthful advantages of living in a place where people feel connected.
At age 13 her family moved to the Horn of Africa where her father served Mennonite mission hospital in Somalia where she first started writing  poems to describe the guban—the desert area that surrounded the village.  She would later write another memoir with her father, A Hundred Camels: A Mission Doctor’s Sojourn and Murder Trial in Somalia detailing his story of being tried for murder after a patient died on his operating table.

Back in Indiana, the ten-acre woods where Shari had grown up seemed more mysterious than she remembered and she started searching for similes and metaphors to describe what she saw and felt. English teachers at Norwell High School encouraged her and a Poet-in-the-Schools gave her a valuable introduction to the elements of poetry writing.
At home town Goshen College she studied with Nicholas Lindsay, the son of Illinois poet Vachel Lindsay and  a poet and carpenter who emphasized poetry’s connections to song, place, and people.  While in school she published two Pinchpenny Press volumes, When the Walls Crumble which included a one-act play, poetry, and a short story, and Feathers in My Hat, an anthology of poetry by residents at Fountainview Place, a senior facility in Elkhart, Indiana. She was editor of The Record, the Goshen student newspaper
After graduation and doing ethnographical work with the Clifton-Choctaw which sparked an interest in Native American life, Wagner earned a Master of Fine Arts Degree (MFA) in creative writing from Indiana University at Bloomington.
Wagner’s poems have been featured by Garrison Keillor on The Writer's Almanac and by former  U.S. Poet Lauriat Ted Kooser in his column, American Life in Poetry. Her poems have also appeared in North American Review, Shenandoah, Black Warrior Review, Indiana Review, The Christian Century, Poetry East, Valparaiso Poetry Review, and many other journals. Her work has been selected for the anthologies Best American Nonrequired Reading, And Know This Place: Poetry of Indiana, and A Cappella: Mennonite Voices in Poetry..
She has been nominated four times for Pushcart Prizes, and she has been awarded two Creative Renewal Fellowships from the Arts Counsel of Indianapolis, as well as twelve grants from the Indiana Arts Commission. In 2009, her essay, Camels, Cowries & a Poem for Aisha, was co-winner of Shenandoah’s Carter Prize for the Essay.
Wagner has taught creative writing and memoir writing to people of all ages and backgrounds, in grade schools, colleges, libraries, community centers, and nursing homes. She is the editor of Returning: Stories from the Indianapolis Senior Center and co-editor of I Remember: Creative Writing by Indianapolis Youth, 2012.  She teaches with the Indiana Writers Center, where she has been a faculty member since 2008.  She is also on the faculty for  the Religion, Spirituality, and the Arts: A Program of Indiana University-Purdue University's Humanities Institute, taught at Bethany Seminary’s theopoetics and writing program.
She lives north of Indianapolis in Hamilton County with her husband Chuck Wagner, a poet and English teacher at Brebeuf Jesuit Preparatory School. They are the parents of two adult daughters. 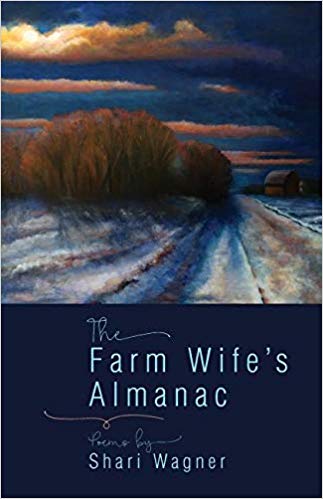 The poems from The Farm Wife’s Almanac feature a fictional speaker of who Wagner says “many of her stories harken back to stories from my family tree. I peeled, sliced, and simmered these accounts, adding this and that, till they turned into something new, like the fruit preserves in the farm wife’s larder.”
The Farm Wife Turns Off the TV Evangelist
The Jesus I grew up with
likes to be outside.
If he’s not fishing, he’s picking figs
or showing us his mustard crop.


He prefers dusty roads, the common sparrow,
and lilies of the field.
When he knocks on your door
holding a lantern, you know it’s time
to buckle on overshoes
and go with him to feed the sheep.


But this preacher, who looks straight
into the camera and claims he knows
Jesus, says what he wants
is for me to believe in him
so he can come inside.


That sounds shifty to me.
Like a wolf with his paws dipped in flour.


Jesus who heals the blind
said we will know a tree by its fruit.