My Columbia College writing teacher John Schulz penned one of the earliest and best accounts of the demonstrations and street confrontations around the 1968 Democratic Convention in Chicago.  He called it No One Was Killed.  Perhaps he was premature in that judgement by 27 years.
It has been a much hotter than usual summer and another blast of steamy heat is expected Friday and over the weekend.  That and the 25th anniversary have caused the Chicago media to recall July of 1995 when more than 700 people died as the city baked in temperatures that hovered around 100° complete with grainy but graphic archival footage of Chicagoans sweltering and the inconvenient bodies piled up in refrigerator trailers at the overwhelmed Cook County Medical Examiner’s offices and buried unceremoniously in slit trenches. 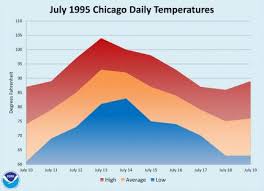 There had been other notable heatwaves in the city, especially in the mid-1930’s when the city was struck with the same blasting heat that created the Dust Bowl.  But none produced anything like the same mortality rates.  Several factors including humidity levels, a heat inversion that trapped polluted air over the city, and frequent spot power outages and brownouts contributed to the toll.  So did the city’s deeply ingrained racism.
By 1995 many Chicagoans enjoyed air conditioning.  But not so much in the city’s poorest wards and neighborhoods.  Massive high-rise public housing developments like Robert Taylor Homes on the South Side and Cabrini Green on the Near North Side as well as Chicago Housing Authority (CHA) mid-rise senior buildings were un-air-conditioned.  And unlike the city’s traditional housing stock of two and three flats, court yard apartments, brick bungalows and other single-family homes, those buildings did not have good cross ventilation to cool them at nights.  Instead they were virtual brick ovens that retained the day’s suffocating heat.

Even when public housing residents or other poor folks could install window air-conditioning units, many could not afford to run them due to the high cost of electricity.  Some were even reluctant to use fans.  Moreover and aggressive campaign by Commonwealth Edison to disconnect power to those with outstanding electric bills who they were barred by law from stopping service to during freezing winter months, left many poor folks in the stifling dark.  In addition, during the heart of the five day heat wave that year record electrical usage sparked wide-spread spot power outages and brown-outs.
Many residents in high crime areas were afraid to leave their windows open at night.
As the oppressive heat and high humidity settled over the city, trapped smog became a further health hazard for the elderly and those with respiratory ailments.
The city government was slow to respond to the growing emergency even as bodies began piling up at the morgue.  The city did not declare a heat emergency and open cooling centers until the fourth day of the crisis.   There was as yet no system for the emergency distribution of fans or to provide bottled water to the most adversely affected residents.
Eric Klinenberg, author of the 2002 book Heat Wave: A Social Autopsy of Disaster in Chicago, has noted that the map of heat-related deaths in Chicago mirrored the map of poverty.  Most adversely affected were the elderly and isolated—those without family or community support.  Old men with chronic illnesses fared far worse than elderly women, who tended to have more social connections to look after them.
The exact number of deaths in Cook County may never be known for sure.  Mortality tables show that 739 additional people died in that week above the usual average.  Blacks suffered significantly higher death rates than whites or Hispanics.

Seven refrigerator trailers had to be used to handle the bodies.  Many of the elderly victims lived and died alone.  When it was all over, 41 of the victims were either not identified or had no family to claim the bodies.  They were buried in plywood caskets in a slit trench in a suburban Homewood cemetery.

Some of the deaths were a direct result of Mayor Richard J. Dailey’s decision to close the parks, especially the lakefront parks to overnight sleeping to prevent them from being used by Yippies and other demonstrator from using them during the ‘68 Convention protests.
Chicagoans had been seeking relief from the heat at night on the shores of Lake Michigan as far back as the 19th Century.  On October 8, 1877 a rare hot, dry blanket covered the city and much of the Midwest on both sides of the Lake. Despite the fact that railroad tracks, lumber yards, tanneries and other industrial buildings, warehouses, and busy wharves and piers blocked easy access to the lakefront in many areas, hundreds, maybe thousands, were sleeping where they could including the cemetery that is now Lincoln Park when the Great Chicago Fire broke out.  They would soon be joined by tens of thousands more fleeing the rapidly spreading conflagration.

After Daniel Burnham’s great plan led to the creation of a string of lakefront parks and public beaches and Chicago’s extensive street car systems made them easily accessible to residents far from the shores, the custom of whole families camping out on blankets under the stars was well established.  In the major heatwaves from the ‘30’s through the ‘60’s the press reported the custom.
That ended after Abbie Hoffman and Jerry Rubin announced plans for a Yippie! Festival of Life during the 1968 Democratic National Convention to protest the War in Vietnam.  The call to the Festival invited the youth of America come to the city and camp in the lakefront parks.  Hysterical press coverage imagined thousands of drug and sex crazed radicals descending of the city and creating “anarchy in the streets.”  For their part the Yippies relished the free publicity.
Alarmed, Mayor Richard J. Daley ordered the Chicago Park District to enact an ordinance closing all parks at 11 pm and prohibiting any sleeping or camping.   First to feel the effects of the ordinance were surprised troops of Boy Scouts and veteran’s organizations who had regularly used the parks for camping.  During a relatively mild heat snap in July families seeking to sleep out were first turned away.

The battles to clear Lincoln Park of Yippies and other demonstrators during the Conventions were bloody affairs with Chicago Police Department baton charges and heavy use of tear gas that spilled into nearby Old Town Streets.
Almost everyone expected that things would go back to normal after it was all over, that either the ordinance would simply be unenforced in future years against ordinary Chicagoans or that it would be explicitly repealed. But Dailey was terrified the parks could once again be used by radicals and by rumors that the city restive and angry West and Southside Black residents would swarm the parks and threaten Loop businesses and the swanky Gold Coast.  His lawyers also advised him that if the camping bans were lifted, the Courts might rule that they had been imposed strictly to limit the rights of assembly and free speech and not, as had been claimed, for general public safety and protection of park land and facilities from damage.
Year after year, the sleeping ban stayed and was vigorously enforced, mostly against the homeless who still sought secluded spots to comfortably rest.  By the 1990’s the old custom of seeking relief at night Lake was a more than half forgotten quaint memory.
How many of these victims might have survived if they still had access to the air conditioner by the Lake?  No one can say for sure, but probably dozens or scores.
They were the late casualties of the Democratic Convention.

Posted by Patrick Murfin at 5:58 AM