The years of the Monroe Administration were already being called the Era of Good Feelings because following the War of 1812 the Federalists had all but disappeared making the Democratic Republicans the single major political party.  But it was now unwieldy and had lost the ideological cohesion of the heady days of the Revolution of 1800 when Thomas Jefferson and the party had swept into office, crushing John Adam’s hopes for a second term.
The orderly system of party caucus which anointed the favorite of the sitting President had broken down and the era of Revolutionary Founders had run out.  Despite the advantage of being Monroe’s obvious choice and a distinguished eight years as Secretary of State, John Quincy Adams found himself no more than a regional choice of the New England and Mid-Atlantic states.  Other regionally backed candidates emerged to challenge him—John C. Calhoun of South Carolina, William H. Crawford of Georgia, Henry Clay of Kentucky, and Andrew Jackson of Tennessee.
Each also represented a nuanced political difference.  Calhoun was a fierce nationalist in those days, Clay was the leader of a faction that wanted western expansion and Federally funded internal improvements like canals and roads.  Crawford was the choice of former Presidents Jefferson and Madison as the logical defender of traditional Republicanism.  And the bellicose Jackson ran as an old conservative favoring limited Federal authority on one hand and western populism on the other.  Adams was left as what we would call today a technocrat who had no independent patronage base.
With no unseemly public campaigning by any of the candidates, the race devolved into complicated jockeying for position in the background.  Calhoun dropped out of the race, presumably in favor of Jackson, but possibly also to benefit his fellow Unitarian Adams—the two were among the co-founders of Washington’s All Souls Church.  At any rate, both Adams and Jackson named him their vice-presidential running mate. Crawford, with strong support across the old South, fell ill and for a while looked like he might also have to drop out.  The popular Jackson swamped Clay in the West. 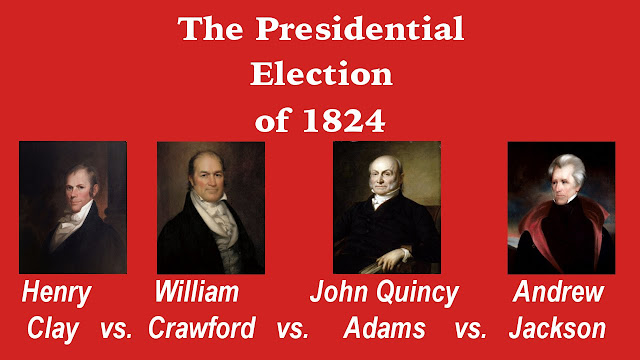 After the November election there was no clear Electoral College winner.  Adams had carried 7 states with 84 Electoral Votes.  Jackson had done even better—12 states with 99 votes, but not enough to carry the day.  Crawford lagged far behind with 2 states and 41 votes.  With the race destined to go to the House of Representatives the odd man out Clay, who had carried three states but only 37 votes despite besting Crawford in the popular vote, threw his considerable support in the House to Adams insuring a victory in that body.  Clay’s national program was clearly closer to Adams than any other candidate and he personally distrusted his regional rival Jackson.
Jackson, the leader in both electoral and popular votes was outraged.  That outrage grew when Adams appointed Clay as his Secretary of State.  Jackson furiously charged that the election had been stolen from him by a corrupt bargain between Adams and Clay.  He immediately launched what amounted to a four year campaign to build a political organization to crush Adams in 1832 and win the Presidency and vindication.
Adams, a stickler for separation of church and state became the only man to be sworn into the Presidency with his hand on a copy of the Constitution not the Bible.
With most pressing foreign policy issues laid to rest by his own successful eight years as head of the State Department, Adams concentrated on domestic issues, at first with some success.  With the support of Clay, now his most trusted advisor, the President pushed an aggressive program of internal improvements and won funding for such projects as the extension of the Cumberland Road into Ohio, the beginning of the Chesapeake and Ohio Canal, the construction of the Chesapeake and Delaware Canal and the Louisville and Portland Canal around the falls of the Ohio, the connection of the Great Lakes to the Ohio River system in Ohio and Indiana; and the enlargement and rebuilding of the Dismal Swamp Canal in North Carolina.
He also supported a high protective tariff, popular both in industrializing New England and Mid-Atlantic states and which was a keystone of Clay’s American System.  But as maneuvering for a new, higher tariff bill went forward, Adams’s supporters in Congress, now known as National Republicans, lost control to Jackson’s supporters, now known as Democrats.  In tricky and duplicitous maneuvering designed by Vice President Calhoun, tariffs on raw materials thought to be obnoxious to New England were added to the bill in the hope that many representatives of that region would be forced to abandon their support.  Then the Southern Democrats, who had put forth the program, would withdraw their support, dooming the tariff.  But it did not work out that way.  A substantial minority of New Englanders in Congress supported the Tariff as best for the whole nation.  When not enough of them turned against it, the Tariff of 1828 passed.
Adams signed it in the face of voracious opposition from the South which labeled it the Tariff of Abominations because of the hardships it imposed on the Planter class, which was dependent on cheap imported manufactured goods. Adams knew it was probably the end of his presidency.
In the election of 1828 the careful plans of Jackson and his new Democratic Party came to fruition.  Adams, like his father, was swept out of office by a virtual bloodless revolution.  Jackson conducted the first real popular election campaign for president while Adams sat traditionally above the fray and reluctant to engage in retail politics to shore up support.

Jackson, with Calhoun once again his running mate, won 15 states, 178 Electoral College votes, and carried a landslide 56% of the popular vote.  Adams and new running mate Richard Rush could only garner 83 Electoral votes from 9 states.  Despite not caring much for the job, the rejection stung.  Like his father before him Adams left town before his enemy’s inauguration.
Adams decided to do what no other former President had ever done and none has done since—run for election to the House of Representatives.  He was handily elected as a National Republican in 1840 and would go on to be returned to the House seven more times until he literally died in his traces.
In his early years in the House he led opposition to Jackson’s popular Indian Removal policies and defended the Second Bank of The United States, the main target of Jackson’s wrath.
A run for Governor of Massachusetts in 1834 failed when he lost to a Democrat.  But he kept his house seat.
Adams became increasingly concerned with rising sectionalism, and particularly the issue of the expansion of slavery.  He felt that slavery would either destroy the union or be ended by a blood bath slave insurrection.
In 1836 the House voted in the so-called Gag Rule which immediately tabled any petitions about slavery, banning discussion or debate of the slavery issue.  The crafty Adams found a way to bring the discussion to the fore anyway.  He laid a petition from a Georgia man calling for disunion to support slavery in the South.  Although he did not support the petition, he did so because it violated the Gag Rule.  Infuriated Southerners called for his censure.  But in his defense in a trial before the House, Adams was able to bring up the topics of slavery and the dangers to democracy by the Gag Rule.  He wielded control of the debate for two solid weeks, gaining national attention.  When the Democratic majority realized that they had been trapped, they tried to withdraw the charges.  But Adams would not let them.  He insisted on an up or down vote which he won.
Adams would challenge the Gag Rule again and again, proud to “be obnoxious to the faction.”
If he was obnoxious before, he doubled down during the Amistad Case.  A shipload of chained slaves destined for sale in the Caribbean managed to take control of their Spanish slave ship, La Amistad in 1839, killing many of the crew and forcing the survivors to return them to Africa.  The crew tricked the mutineers and instead sailed north into American waters where the ship was intercepted by a Revenue Cutter off the shores of New York.
The slaves were taken into custody and the Spanish government demanded the return of its “rightful property.”  A Federal District Court, however, ruled that under the terms of a treaty between Great Britain and the United States which outlawed the international slave trade, Spain had no claim on the men.  Moreover, it ruled that they had properly taken action to free themselves from what amounted to an illegal kidnapping.
The decision outraged Southerners and set up a major diplomatic crisis with the Spanish.  President Martin Van Buren ordered the Justice Department to appeal the case to the Supreme Court.  Congressman Adams offered his assistance in arguing the case before the Court.  After Roger Sherman Baldwin, the young lawyer who had represented the slaves from the beginning opened with two days of argument, Adams stood before the Court on his own on February 24, 1841.

He boldly attacked President Van Buren for inappropriately assuming unconstitutional powers in the case by ordering intervention.  Then as the most experienced diplomat in American history and the actual author of some of the Treaties cited by Attorney General Gilpin who was personally arguing the case for the government, Adams skillfully demolished claims that the treaties demanded the return of the men to Spain.  Adams argued for eight and a half hours during which time Justice Philip Barbour died.  After a recess for the funeral, he concluded his arguments on March 1.
The Court affirmed the lower court’s ruling on March 9 with Justice Joseph Story citing many of Adams’s arguments in the ruling that freed the rebels.
Adams became a hero of the cause of anti-slavery and more of a villain than ever to the South.
Back in Congress he continued to oppose slavery in any way possible and continued his attacks on the Gag Rule.  He led opposition to the Annexation of Texas as a slave state.
His other major contributions in Congress included authoring a compromise on the Tariff of 1828 that he himself had signed ending the Nullification Crisis and the establishment of the Smithsonian Institution with the funds bequeathed to the United States by English millionaire James Smithson for the “increase and diffusion of knowledge.” A lot of hands were out for a slice of that pie, but Adams insisted on the creation of a national academy.  When the bequest was unwisely invested in shaky bonds, Adams argued to immediately accept the money with repayment of the losses.  Congress decided to accept the legacy bequeathed to the nation and pledged the faith of the United States to the charitable trust on July 1, 1836.

Indefatigably, Adams plugged on despite deteriorating health and age. But on February 28, 1848 Adams rose to speak against a resolution honoring officers who served in the Mexican War, which he had voraciously opposed.  With opponents trying to shout him down, Adams suffered a massive cerebral hemorrhage while standing at his desk and collapsed.  He was carried to the Speaker’s Room off the floor of the House where two days later he died after whispering to his wife and son Charles Francis, “This is the last of earth. I am content.”

After a brief internment in the Capitol crypt, his remains were returned to Quincy where he was first laid to rest in the church yard of First Parish Church.  Later his remains were moved to a crypt inside the church next to his mother and father.  The resting place can still be viewed at the Unitarian church that came to be called the Church of the Presidents.