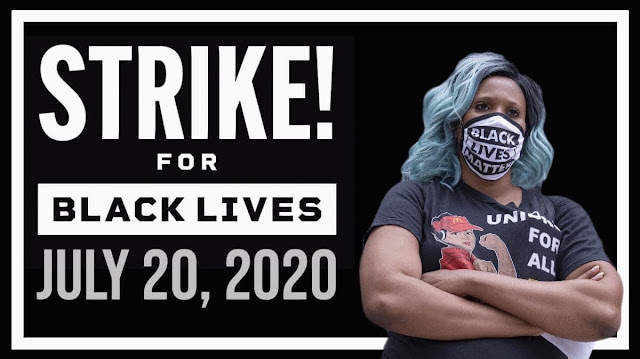 The Labor movement and Black Lives Matter will come together today in a nationwide Strike for Black Lives organized by the Service Employees International Union (SEIU), which represents nearly 2 million service workers and other unions, Civil Rights organizations, and labor allies.
According to SEIU President Mary Kay Henry the strike is intended to highlight the economic plight of service workers, many of whom are People of Color.  During the first two months of the coronavirus pandemic, her union was concerned about how essential workers were being treated on the front lines. Some lacked access to personal protective equipment (PPE) that would help them avoid contracting COVID-19.

The death of Black Minneapolis resident George Floyd while in police custody “escalated the case we were trying to make” about the mistreatment of Black people, Henry said.    “We hope to gain that corporations and governments will understand the need to dismantle racist policies and make sure every family has a living wage and is able to be healthy and safe.”
The strike is intended to put more attention on low-wage workers who risk their lives but struggle to pay their bills. Although major companies pledge support for the Black Lives Matter movement, they pay their workers low wages, fail to provide paid time off while sick, and, in some cases, fail to provide the necessary equipment to keep them healthy on the job, Henry said. “Most workers are infuriated by it because it’s so hypocritical,”
The demands being put forth during the strike include:
Unions and civil rights groups planning to take part in the strike include the International Brotherhood of Teamsters, the American Federation of Teachers, Fight for $15 and a Union, United Food and Commercial Workers, Greenpeace, MoveOn, and the American Civil Liberties Union.  Ride-sharing drivers for companies like Uber and Lyft are also expected to join in.
Police unions, which have been hyper-critical of the Black Lives Matter movement, defended police violence, and encouraged even more aggressive action to suppress protests will not be participating although Henry says that some unions representing correctional and probation officers “actually understand that there is systemic inequality that has to be addressed.”

The strike will take place at different times depending on the city and location. Some of the 25 cities expected to have actions include Los Angeles, Chicago, Miami, Seattle, and Houston. In Los Angeles workers will gather in cars as part of a caravan beginning at a local McDonald’s—a long time target of  demands for a $15 an hour base wage  and union recognition—and then drive through the city, stopping by places like the University of Southern California, where organizers said they’ll “demand the nation's second-largest school district and the university drop their use of the Los Angeles Police Department (LAPD) on campuses.”

Chicago will have at least two actions.  The Chicago March/Caravan for Black Lives will start from the Illinois State Government Thompson Center, 100 West Randolph and visit job site across the city where the SEIU represents impacted workers including hospital and nursing home staff, home health care workers, custodians and housekeeping staff, hospitality and fast food workers, and state and local public employees.  Teamsters represent warehouse and distribution workers and the Food and Commercial Workers have grocery store and other retail workers.
At  3 pm a Chicago Teamsters Walk Out for Black Lives sponsored by  Teamsters Joint Council 25 will begin at a job site at 4600 South Kolin Avenue.
In New York City, essential workers will gather outside of the Trump International Hotel to demand that the Senate and President Donald Trump pass and sign the HEROES Act, House-passed legislation for providing PPE,  essential pay, and extended unemployment benefits to workers who have not had the option of working from home during the coronavirus pandemic.  Organizers said New York Senator Chuck Schumer is expected to rally with workers.

Strikers in Minneapolis, where Floyd was killed, will include nursing home and airport workers demanding a $15-per-hour minimum wage.  In Missouri, participants will rally at McDonald’s locations in St. Louis and Ferguson, a key BLM landmark sparked by the death of Michael Brown who was killed by police in 2014. The Ferguson strikers will also march to a memorial site where Brown was shot and killed.
For workers who are unable to strike, the organizers urge them to walk off their jobs at noon for eight minutes and 46 seconds, the amount of time initially that a police officer held George Floyd under a knee on his.
Today’s action are an important and historic link between a revived and energized labor movement and one of the most important and game changing social movements of our time.