Cecil and Sandra Bland—Whose Life Mattered and Where Were Your Priorities?

Note—This recycled post would ordinarily not see the light of day again as it was pegged to specific news articles.  I rediscovered it, however, and thought that most readers would remember the news stories cited.  Besides, I like the message.  As predicted the original post did rouse some apoplexy and I was un-friended on Facebook by some seething animal lovers.  Hyper-sensitive White guys were also not happy.  One commentator on the original post took pains to complain that Black Lives Matter “only when they are shot by police” and not when Blacks murder each other—a patented accusation that not only misses the point of the movement but is a quick give away to not-so-cleverly hidden racial animus.  I’ve added a lot of people on Facebook since then, and foresee another round of blithering.  Meanwhile, despite years of protest, senseless police violence against Black folk and other people of color continues.
Get the tar pots boiling.  Slash those old pillows, you are going to need plenty of feathers.  There is probably a decorative rail fence over in the neighbor’s yard.  A lot of you will want all of the gear.  A lot of you are seriously going to hate this post and be itching to ride the author on the rail straight out of town and off the internet.
In 2015 social media erupted with a virtual torrent of posts about Cecil, a particularly majestic African lion who had somehow become an internet celebrity.  The big cat was apparently lured out of a heavily protected Zimbabwe game reserve and killed by a bow hunter on what amounted to a canned hunt.  The killer was quickly identified as a dentist from Minnesota who immediately became the most reviled and despised man on the internet and the object of a howling global virtual lynch mob.  I would guess based on my Facebook page that 80 to 90% of the anguish and outrage came from tender hearted white folk who love animals.
I get it.  I really do.  We love animals from cute kittens to the endangered wildlife now routinely captured on breathtaking film by world class cinematographers for endless cable channel nature series.  We are viscerally affected when we see them suffer.  Hell, Jimmie Kimmel was in tears over the death of Cecil on his TV show.
And I am down with protesting needless cruelty and the wanton destruction of trophy hunting, poaching, baiting, and the like.  Got a petition?  I’ll sign.
But as I scrolled down my Facebook news feed through the almost endless posts I noticed something.  Most of the posts were from friends and acquaintances who otherwise never want to get political.  Very nice people who post those kitten videos, pictures of their lunches, humorous memes, lots of family, and a heavy dose of nostalgia.  People who for the last two years in the face of mounting evidence of structural racism and hair trigger police violence against People of Color have never been moved to say a word.  People who are annoyed at and bewildered by all of the fuss and are frightened and offended by street protests.  People who become exasperated by the whole thing and finally add a comment that “all lives matter” or who maintain that “those people must have done something wrong.”
If you heart is big enough and your willingness to get involved is strong enough for both Cecil and the parade of dead and maimed Black men, women, and children,  I am not talking to you—and I did recognize quite a few of you.
I am talking to the rest of you with your moral blinders on and exquisitely refined and limited sympathies.  Let me put it bluntly…Your priorities are fucked up.  And I am here to hold you accountable—a favorite term, after all, conservatives—for enabling racist, state and socially approved violence against people of color by your silence, squeamishness, and cowardice.

The death of Cecil came a week after the troubling death of Sandra Bland in a Texas jail.  In some ways it does not matter if she was murdered in custody, or if she was driven by despair to harm herself.  What is explicitly clear by the video captured by the police’s own camera is that in broad daylight a quite respectably dressed Black Woman was stopped for the very minor moving violation of a broken turn signal and within moments was dragged from her car, slammed violently to the pavement, injured, and ultimately arrested and hauled to jail on charges of resisting arrest.  Once in custody authorities did what they could to prevent her from easily communicating with her distant family and threw every obstacle available to her ability to be released on bail.  After her death county authorities rushed to defame her with claims that marijuana had been found in her system.
Now wind that scenario back to the beginning and imagine a white woman in an identical circumstance, even one who got sassy to the officer.  Who honestly believes that she would not have been sent on her way with a scolding and a traffic ticket?  Maybe the rate of assault and unjustified incarceration by police against Junior League members is so incredibly low by mere happenstance.  Or not.
Yet so many defenders of Cecil could not work up a yawn about Sandra.

Then body camera video was released of University of Cincinnati Police Officer Raymond Tensing executing Black motorist Samuel Dubose by shooting him at point blank range in the face through his open car window.  Dubose was pulled over for the hideous crime of missing a front license tag and was slow to respond to a request for a driver’s license.  These are not capital crimes.  Neither was stealing cigars, selling individual cigarettes on the street, or a 12 year old playing alone with a toy gun in a park to rattle off just a few of the cases of the last two years.  Fortunately in the most recent case, quite different from most of the others, local authorities moved quickly on the overwhelming evidence.  The University fired the officer and just one day after the video was released, the Grand Jury handed down an indictment for first degree murder.  The Prosecutor even sounds serious about vigorously pursuing the case.  We’ll see.  [2020 Note—A 2016 trial ended in mistrial after the jury became deadlocked. A retrial begun in 2017 also ended in a hung jury. The charges against Tensing were later dismissed with prejudice.]
Once again so many Cecil fans could not be bestirred.
My Facebook feed is filled with commentary about those cases and others.  But my feed, which includes many friends who are Black and other people of color, committed social justice activists, and religious leaders, may not much resemble yours.  I hear a variety, even a cacophony of voices—even those of hyper-conservatives, gun enthusiasts, law and order hard liners, and a couple of openly avowed racists who have not de-friended me or been blocked for threatening physical attacks on me and my family.  Everyone should be exposed to a variety of opinions and attitudes.  Are you?  Or do you close yourself to those who challenge a cocoon of safety and invulnerability? 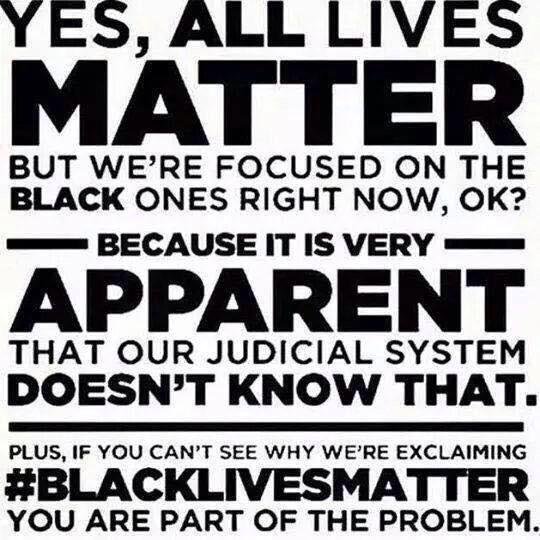 The de facto community on my Facebook feed is not perfect.  But some of us engage in the hard issues brought forth by the Black Lives Matter Movement, wrestle with how to best and most effectively act as white allies against racism, and even, most painfully of all, confront and acknowledge our white privilege and grapple with our own implicit participation in a system designed to promote oppression of minorities.  We are no angles.  Far less are we white saviors.  But at least we are engaged.
Go ahead.  Love Cecil.  Seek justice, even revenge for his brutal death.  But literally for Christ’s sake get your priorities straight and offer the same love and thirst for justice to your Black neighbors.
End of screed.

Posted by Patrick Murfin at 7:12 AM