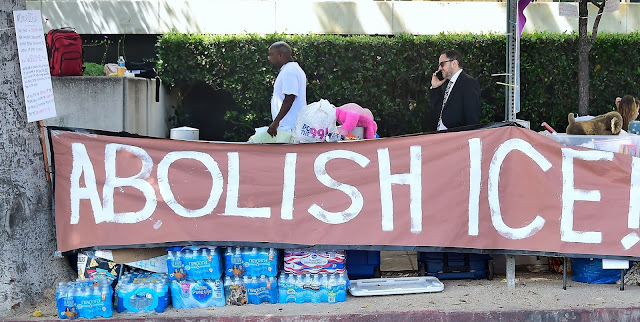 Note—I was asked to speak today at the Abolish ICE in McHenry County Protest which will be held between 2 and 4 pm on Woodstock Square.  This is more or less what the Old Man plans to say.  Many more cogent and compelling speakers will also be on hand to testify about the terror and tragedy spread by ICE and abetted by McHenry County renting space in the Jail as an immigrant detention center.
You have and will hear a lot today about the fear that ICE strikes in immigrant families and about the multiple tragedies and injustices born by those incarcerated in the Federal unit at McHenry County Jail.  Buy I am here today to talk even more reasons to abolish ICE and the rogue agency of which it is a part—the Department of Homeland Security.  While either continues to exist in their current forms, no resident or even citizen is safe.

The Department of Homeland Security was hastily created in the panic following the 9/11 terror attacks on the Twin Towers in New York and the Pentagon in Washington.  Everyone was imagining even more and more grizzly attacks.  Existing agencies were put under its jurisdiction including the U.S. Customs Service which was split up into Immigration and Customs Enforcement (ICE) and Customs and Boarder Services (CBS); The Federal Protective Service; The Transportation Security Administration (TSA); Federal Emergency Management Agency (FEMA); the Coast Guard; the Secret Service; and a dozen or so smaller and obscure security agencies.  The draconian Patriot Act gave sweeping powers to component agencies as well as to the Justice Department, FBI, and intelligence agencies, many of which are little known or understood by the public.
No agencies grew in numbers of agents or in power more than ICE and CBS.  While Barack Obama was trying to push comprehensive immigration reform including protection for Dreamers and a path to citizenship for long-time undocumented residences, he beefed up boarder enforcement including the first family separation and child internment to prove that he was tough on border security.  Likewise he empowered ICE to make aggressive round-ups especially at factories and work places.
Donald Trump whipped anti-immigrant hysteria into a frenzy with his promises of a “Big Beautiful Wall”  and concentration camp like detention centers.  Both ICE and CBS were frequently cited for brutality as well as often sweeping up legal residents and citizens and detaining them for weeks or months until they could prove their status.  Some were deported.

Then Trump turned them into a national Secret Police.  They and officers of other agencies were first unveiled in their heavily armed and armored military stile camo uniforms with no identification of agencies or individuals guarding the completely unthreatened Lincoln Memorial during Black Lives Matter protests.  A couple of days later they attacked a peaceful demonstration in Lafayette Park with tear gas, pepper spray, stun and flash grenades, and allegedly “less than lethal”  ammunition so that the Cheeto-in-Charge could wave an upside down Bible in front of a church that had been giving support to the demonstrators.  It took the media a couple of days to ferret out who the mystery troops were.
Then they showed up uninvited in Portland where they kidnapped individuals away from demonstrations around the Federal building, throwing them in unmarked vans, and transporting them to secret locations which Homeland Security later defended as justified “preventative detention.”

Some media dismissed the abductions as aberrations because the mystery police were not properly trained.  That is not so.  Any immigrant community will attest that street abductions are exactly what ICE and CBS personnel are trained to do.
And night after night in Portland the Federal troops have escalate violence with brutal attacks that have included assaults on medics, journalists, legal observers, and even the Mayor.  They did not hesitate to attack the famous Wall of Moms formed to protect protesters.

Trump, Attorney General Bill Barr, and Acting Homeland Security Secretary executives Chad Wolf have all bragged about what a good job they were doing.  Trump threatened to send more such troops to “Democratic Cities” including New York, Chicago, and Detroit.  That is made possible in part because ICE jurisdiction includes everything within 100 miles of an international border and the coasts—a band around the entire county that includes more than 80% of the population.  That includes us gathered here in Woodstock.  This gathering could be declared a riot and insurrection and be targeted.  Don’t think it could not happen as the administration grows both more desperate to retain power and more emboldened to go full fascist.

There have long been calls to abolish ICE but Congresswoman Alexandria Ocasio-Cortez and others have also called to abolish the Department of Homeland Security.  So has the Unitarian Universalist Association and the Unitarian Universalist Service Committee which declared:
For years, immigrant activists have been saying that the violations of migrant rights are the “canaries in the coalmine,” anticipating the erosion of the rights of all Americans. For years, Black activists have pointed to the ways their communities are criminalized by police: local, state, and federal. What’s happening now in Portland is the logical extension of long-existing abuses. When we tolerate the expansion of government power, allowing it to trample on the rights of immigrants, Muslims, and Black and Indigenous people, the inevitable result is not only grave injustice against some of us, but a steady loss of legal protections for all of us. We are witnessing the consequences of this failure of vigilance in the streets of Portland today.
While many components of the Department do serve compelling purposes—The TSA, FEMA, Coast Guard, and the Secret Service for example—they all were in existence before the Department was created and could be transferred back to their original organizational homes or reorganized in some other way.
Abolish ICE!  Abolish CBS!  Abolish the Department of Homeland Security!

Posted by Patrick Murfin at 7:19 AM