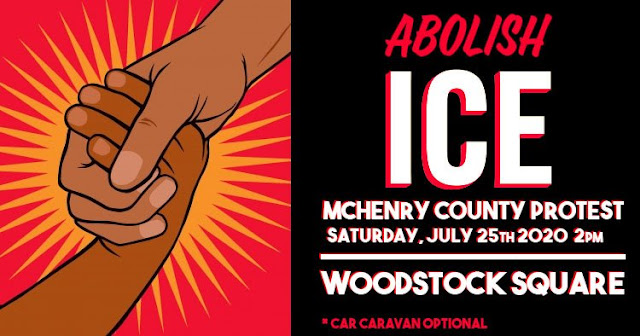 An Abolish ICE in McHenry County Protest will be held between 2 and 4 pm on Saturday, July 25 on Woodstock Square.  Several speakers will be featured at a rally to demand the abolition of the U.S. Immigration and Customs Enforcement Agency and for McHenry County to end its contract to use the Jail as an immigration detention facility.  An optional car caravan around the downtown area will be for those who prefer to participate with greater safety.

The event is being organized by McHenry Direct Action, Activists for Racial Equity (Crystal Lake and surrounding areas), and Standing Up Against Racism-Woodstock.  Press spokesperson Allison Carroll said, “We are organizing to demand that the McHenry County Board immediately end their contract with ICE. We can no longer profit off of human misery.”
She added that the public is encouraged to contact County Board Chairman Jack Franks at 815 334-4224 to ask him to add canceling the contract to the agenda of the next County Board meeting.
The Tree of Life Unitarian Universalist Congregation Social Justice Team is also endorsing the event and Team Chair Patrick Murfin will be one of the speakers.
The top floor of the Jail is rented for immigrant detention and is staffed by County Correctional officers. The agreement, which is a lucrative money maker for the Sheriff’s Office which operates the Jail, has long been controversial.  Several rallies, marches, and car caravans have protested at the Jail in recent years.

ICE is notorious for its brutal and aggressive boarder enforcement, including family separation policies that have led to lengthy detention of children in inhumane conditions.  The agency also stages raids on employers and in immigrant heavy neighborhoods that tear families apart.  More recently ICE has been in the news because the Department of Homeland Security is deploying them as unidentified police in Portland where they have escalated protest confrontations and have snatched suspected protestors off of the streets in unmarked vans.  The Trump administration has announced similar planned deployments in Chicago, New York, and other cities with “Democratic Mayors.”

Participants in the Saturday rally are urged to bring signs, wear masks, and observe social distancing.
For more information visit the Facebook Event .

Posted by Patrick Murfin at 7:47 AM