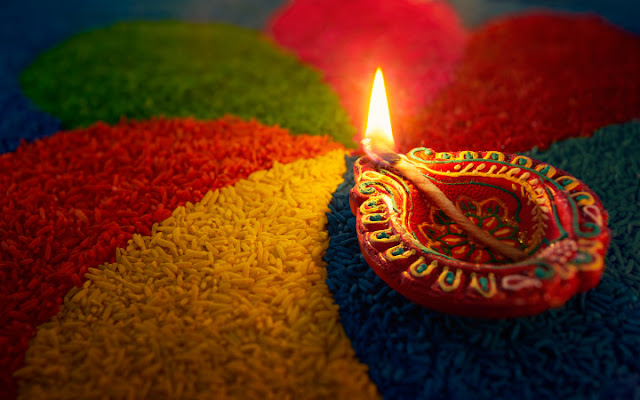 There are many Festivals of Light celebrated by religions and cultures around the world including Christmas, Chanukah, and Winter Solstice observances familiar in the West.  But none are more colorful or enjoyed with such gleeful abandon a Diwali, the Hindu festival of the victory of light over darkness, good over evil, and knowledge over ignorance.  In most of the Northern Hemisphere the five day holiday began this year on October 23, and reaches its peak on Wednesday, the third day of the celebration.

The large Indian diaspora in the United Kingdom, South Africa, the Caribbean, Canada, Fiji, the United States and elsewhere has spread observances across the globe.

Typically, during the celebration, temples, homes, shops, and workplaces are brightly illuminated.  In most of India the climax of the festival occurs on the third day coinciding with the darkest night of the Hindu solar month Kartika. In the Gregorian calendar, it generally falls between mid-October and mid-November.

In 2020 even one of the worst Coronavirus outbreaks in the world could not stop Hindus in India from shopping to prepare for Diwali.

During the climax, revelers adorn themselves in their finest clothes, illuminate the interior and exterior of their homes with diyas (oil lamps or candles), offer puja (worship) to Lakshmi, the goddess of prosperity and wealth, light fireworks, and enjoy family feasts, where mithai (sweets), and gifts are shared.

Details of the celebration vary across regions and even the names of each feast day change with local dialects and languages.  In much of southern India and in Sri Lanka Tamils celebrate the first day of Diwali as most significant.  Diwali is also a major cultural event for Jains and other religious minorities on the Indian Subcontinent.   The Sikhs celebrate Bandi Chhor Divas to mark the release of Guru Hargobind from a Mughal Empire prison.  Newar Buddhists, unlike other Buddhists, celebrate Diwali by worshipping Lakshmi, while the Bengali Hindus generally celebrate Diwali, by worshipping Goddess Kali.  Except for Muslims and the small minority of Indian Christians, pretty much the whole country takes off to party. 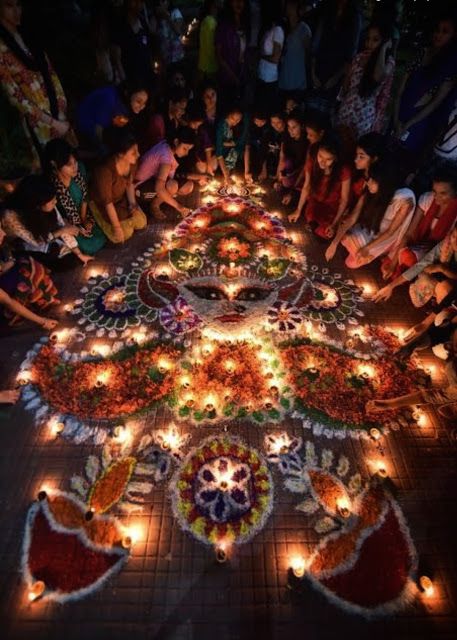 The Diwali festival is likely a fusion of harvest festivals in ancient India.  It is mentioned in Sanskrit texts such as the Padma Purana and the Skanda Purana both of which were completed in the second half of the 1st Millennium CE. The diyas are mentioned in Skanda Kishore Purana as symbolizing parts of the Sun, describing it as the cosmic giver of light and energy to all life and which seasonally transitions in the Hindu calendar month of Kartika.

William Simpson labelled his chromolithograph of 1867 as Dewali, feast of lamps. It showed streets lit up at dusk, with a girl and her mother lighting a street corner lamp.

Most British, Commonwealth, and North American Hindu communities have their roots in the north of India and commonly celebrate these five days:

Day One—Dhanteras marks the beginning when people traditionally purchase some gold or silver or at least one or two new cooking utensils for good luck. 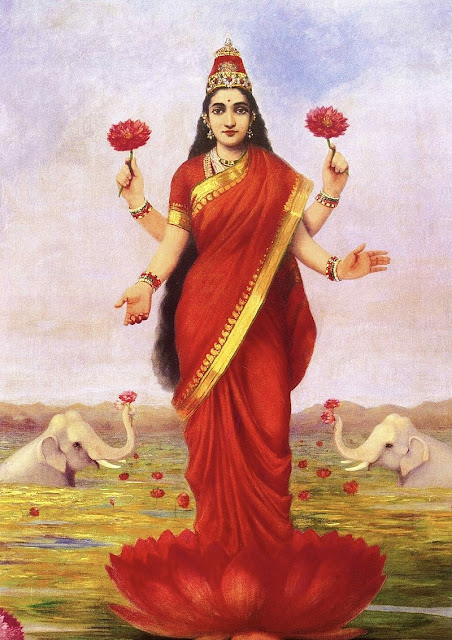 Day Two—Narak Chaturdasi is also called Choti Diwali when people take oil baths before sunrise with ubtan, a homemade paste of herbs that can be used as a soap, and a face or body mask. 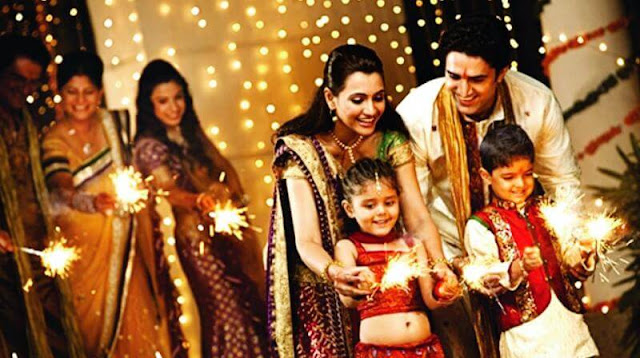 A family celebrates with sparklers and new clothes.

Day Three—Lakshmi Puja is the main and most festive day of the festival when people keep the house spotlessly clean and pure to welcome goddess Lakshmi. After a day of fasting sweets and gifts are shared.  Lamps are lit in the evening, and Lakshmi puja, a home religious observance celebrating the goddess with chants, mantras, and honoring of ancestors.  Celebrations spill from homes and businesses into the streets with more lamp lighting, singing and dancing and public fireworks.

Day Four—Govardhan Puja or Padwa celebrates the love between husband and wife in commemoration of Parvati and her husband Shiva as well as the lifting the Govardhan mountain by Krishna to save a cowherd and farming communities from incessant rains and floods triggered by Indra’s anger.  It is thus also a harvest fest and day of thanksgiving marked by Annakut, the mountain of food. Communities prepare a meal over one hundred dishes from a variety of ingredients, which is dedicated to Krishna before shared communally. Hindu temples on this day prepare and present mountains of sweets to the faithful who have gathered for darshan, a visit. In Gujarat, the day is also called Annakut is the first day of the new year and celebrated through the purchase of sabras, the good things in life, such as salt, offering prayers to Krishna and visiting temples. 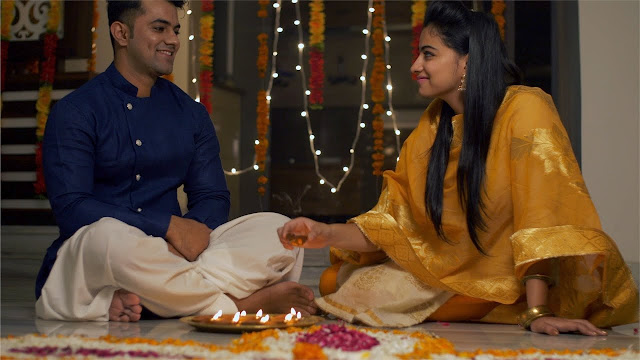 A sister feeds her brother by hand.  Many modern Hindus now celebrate Bhai Duj as an equal celebration of sibling love.

Day Five—Bhai Duj celebrates the bond between brother and sister.  Women of the family gather, perform a puja with prayers for the wellbeing of their brothers, then return to a ritual of feeding their brothers with their hands and receiving gifts. In some Hindu traditions the women recite tales where sisters protect their brothers from enemies that seek to cause him either bodily or spiritual harm. Often brothers travel to meet their sisters or invite their sister’s family to their village to celebrate their sister-brother bond with the bounty of seasonal harvests. 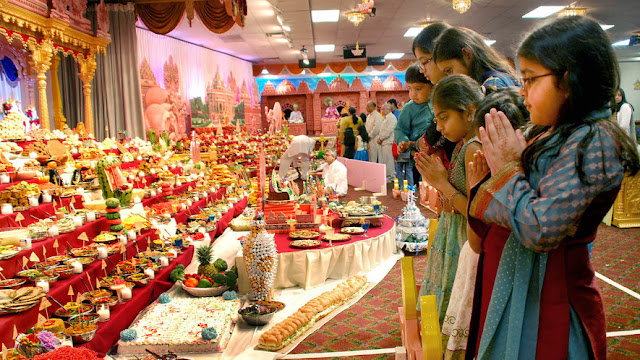 Family prayers before the Mountain of Sweets in a North American temple.

Variations on these are almost infinite in the complex world of Hinduism and customs can even vary from village to village in the same regions.  But the joy of the season is celebrated by more than 800 million people worldwide making it one of the largest religious festivals on the planet.

Posted by Patrick Murfin at 5:30 AM