The First US Railroad Was Not the Baltimore & Ohio Afterall 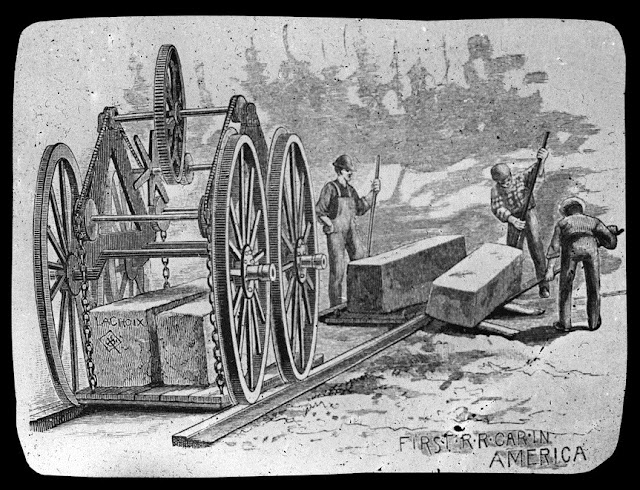 Workers load granite blocks on to the highly specialized car of the Granite Railway in the 1830's.

The answer is the First American Railroad.

What was the Baltimore & Ohio?

I’m sorry that incorrect.  (Dumb struck look on contestant’s face, a scattering of boos from the audience convinced a mistake has been made. Pause and slightly supercilious smirk from Ken.)  The question we were looking for was what was the Granite Railway.

But it is the truth, albeit obscure and accompanied by a couple of asterisks.

The Baltimore & Ohio was chartered on February 28, 1827 and famously launched passenger service in 1830 on 13 miles of track.  Passengers rode in open cars pulled by the Tom Thumb, the engine designed and built by Peter Cooper.

But the first chartered railroad to go into operation in the United States was the Granite Railway which on October 7, 1826 began hauling stone from quarries in Quincy, Massachusetts for three miles to the banks of the Neponset River where the stone blocks were transferred to ferry barges and then hauled by wagon to the construction site of Boston’s Bunker Hill Monument. 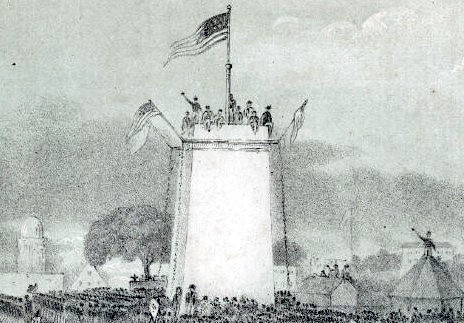 The Granite Railroad's first and main customer was the Bunker Hill Monument, a  221-foot granite obelisk erected between 1827 and 1843 in Charlestown, Massachusetts.  It was part of an era in which the Revolution was being mythologized to  shore up a national identity especially in the north.  It was also a rich boondoggle for local politicians, businessmen, and speculators like the founders of the railway.


The railroad was largely the brainchild of Thomas Handasyd Perkins, an early promoter of the Monument project and a member of the Massachusetts legislature who obtained a charter from that body on March 4, 1826 granting the eminent domain to establish its right-of-way.  Perkins then proceeded to obtain credit, organize the company retaining for himself the majority of shares, and became President.  Public service was in those days not seen as a bar to shrewd business.

Perkins obtained the services of the best know civil engineer in New England.  Gridley Bryant had already become famous for the invention of a construction crane that would make massive monument possible.  He won the contract for that construction, as well as for another important building, the Boston branch of the Bank of the United States.  In fact, it was undoubtedly Bryant’s idea to move the massive blocks for the memorial via rail.

Before going into the technical details of the road, perhaps now is the time to explain some of the asterisks that might be needed to qualify the Granite Railway’s claim to be first.  There were a few short runs of rails entirely on company property, usually mines, with small tram cars pushed by hand or pulled by mules.  There were one or two other railroads granted charters but not built.  The Granite was chartered as a common carrier, which meant that although the Monument was its first customer, others could—and did—pay freight charges to bring the stone that they bought from the Quincy quarries closer to their construction projects in rapidly growing Boston.

Finally, the Granite did not for the first decades of service employ steam engines.  Remember we are talking about the first railway, not the first locomotive.

Gridley used techniques already developed in England but adapted them for the much heavier loads expected from the quarries and from a deep three foot frost line.  Wooden rails were topped with iron strap and laid 5 feet apart on stone crossties spaced at 8-foot intervals.  The first cars had six foot diameter wheels, and each was loaded with a single large block or two or two or three smaller ones pulled by a single horse. 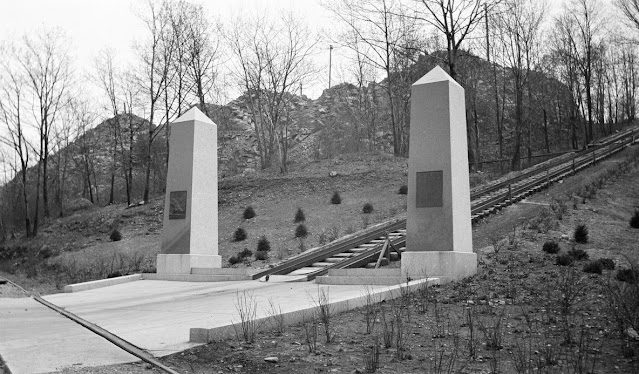 The Incline photographed in the 1920's


In 1830 the line was expanded by the addition of an incline to haul granite from the Pine Ledge Quarry to the railway grade 84 feet below. Wagons moved up and down the 315 foot long incline on an endless conveyor belt.

Gridley continued to make improvements to the line.  In 1837 the wooden rails were replaced by iron-topped granite.  And there were technological innovations that helped make modern railroading possible, most importantly railway switches known as frogs, the turntable, and double-truck cars.  Gridley never took patents on these innovations, believing they should be widely available for the good of the public.

Like the construction of the Monument, the little railroad became a tourist attraction.  Dignitaries like Daniel Webster—a patron of the Monument, investor in the road, and supplicant to have his “purse refreshed” for legislative services rendered in the U.S. Senate—trekked out of the Hub City to watch the marvel in operation.  In 1833 the English actress and noted diarist Fanny Kemble wrote admiringly of her visit, even though much more ambitious railroads employing steam power had been in operation in her home country for some years.

Sometimes visitors were allowed to ride in empty cars, if they were not fussy about stone dust on their clothing.  That led to one the first American railway fatalities when a Cuban tourist Thomas Achuas was pitched over a cliff into a quarry when the car his party was riding in derailed on July 25, 1832.

In 1871 the Old Colony & Newport Railway bought the company out and began operating on its right-of-way.  The new operator brought the old railroad up to industry standards installing standard gage steel rails and introducing steam engines and a bridge over the Neponset River to eliminate the tedious and slow transfer of stone to ferry barges.  By this time new, larger capacity cars were in service in trains of three pulled by multiple horse teams in single hitch. 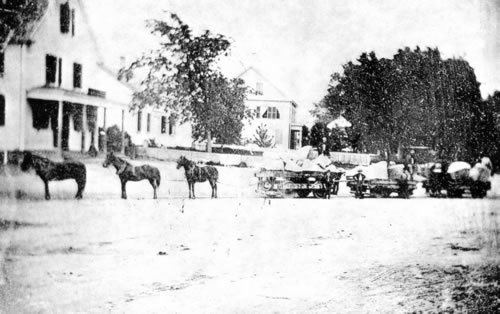 A Granite Railway loaded train from near the end of the horse drawn era circa 1880.


The New York, New Haven & Hartford Railroad eventually took over the old Granite right-of-way.  In 1903 it covered the rails of the Incline with steel plating and introduced motor trucks to haul stone over that short distance.

When the last Quincy quarry finally closed in 1963, service on the line as abandoned.  In 1985 the Metropolitan District Commission purchased 22 acres, including Granite Railway Quarry for the Quincy Quarries Reservation.

The Incline was listed with the National Register of Historic Places on June 19, 1973, and the railway itself was added on October 15, 1973. 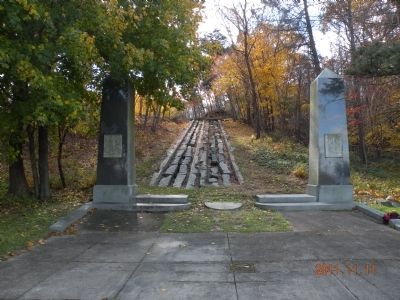 The ruins of the Incline today.


The Massachusetts Department of Conservation and Recreation now maintains the Quincy Quarries Reservation.  There are rock climbing opportunities, ruins of the Incline and trestles, and a 2.5 Rails-To-Trails multi-use path for cyclists and pedestrians from Central Avenue in Milton/Adams and ending on Taylor Avenue near the I-93 overpass in Quincy.

If you walk that trail today at brisk pace, you are undoubtedly beating the time of those old horses with their heavy loads.

Posted by Patrick Murfin at 5:34 AM