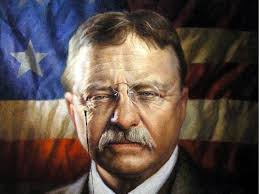 Brilliant. Bombastic. Explosively energetic.  Arrogant.  Innovative.  Egomaniacal.  Heroic.  Perpetually manic.  Self-inventing.  Those are some of the words and phrases the immediately spring to mind when contemplating the life of Theodore Roosevelt, the man who, among other things, reinvented the Presidency for the 20th Century.  The man who was born into a wealthy and influential old Knickerbocker Dutch family on October 27, 1858 continues to fascinate 103 years after his death in 1919 at the age of 60.

In recent years he was the subject of widely hailed three volume biography by Edmund Morris and several other books examining various parts of his multi-faceted life, studied in Doris Kearns Goodwin’s close examination of the Progressive era in The Bully Pulpit, portrayed by Tom Berenger in the TV miniseries Rough Riders, and was one of the three main characters profiled in Ken Burns’ epic 5 night PBS documentary series The Roosevelts. And one of my favorite novelists and Facebook connections Jerome Charyn got inside T.R.’s head in The Perilous Adventures of the Cowboy King. 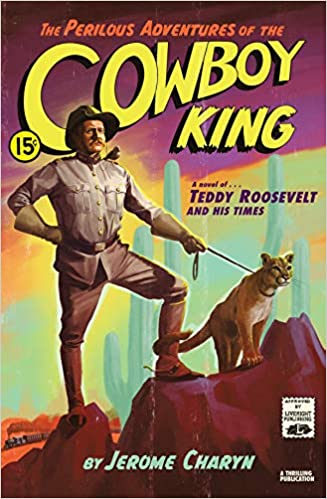 Jerome Charyn's The Cowboy King was a rip-roaring romp and a reminder of why idolized Theodore Roosevelt.  It even echoed the vibe of my Classic Illustrated comic book.


But 40 years after Roosevelt’s death, he also grabbed the idolizing attention of a 10 year old nerd from Cheyenne, Wyoming.  I was already in the grips of fascination with history as a bespectacled, bookish kid with no friends when I first encountered passing notice of him in my entirely inadequate elementary school social studies text.  From there I checked him out in the illustrated Presidential biography books that I had already collected.  And my folks had taken me to the Black Hills where I had seen Roosevelt’s visage squeezed in between Jefferson and Lincoln on Mount Rushmore.  So I knew he was a big deal.

But what turned Roosevelt from a passing interest into an obsession was a Classics Illustrated   comic book The Roughrider.  It told the story of how young Theodore, the weakling asthmatic who was bullied and mocked for his myopia and thick glasses but who by dint of sheer grit and determination transformed himself into a Harvard boxer, South Dakota rancher, New York City Police Commissioner, war hero, and eventually President.  A particularly satisfying panel in the book depicted Roosevelt knocking out with one mighty blow a cowboy who mocked him as four eyes.  The boy Teddy seemed a lot like me, likewise the brunt of ridicule and abuse.  The adult hero held out promise that it did not always have to be that way.

It was a short step from hero worship to nutty obsession.  How so?  Let me count the ways. 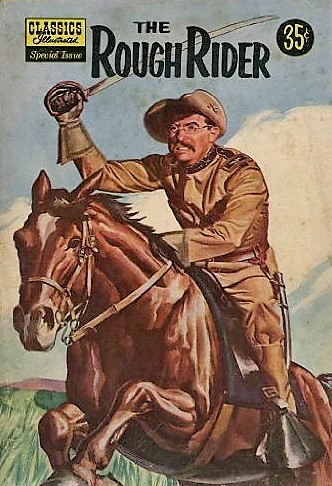 Not Batman, Superman, or The Flash could compete with my comic book super hero..


The first thing was appearance.  The mustache stubbornly refused to rise from the fine blonde down on my upper lip.  Halloween costume fakes were all jet black, lacked the distinctive inward curl around the sides of the mouth, and, well, looked like crap.  And I discovered that pince-nez glasses were not available at my local optician’s.  I was stuck with the clunky plastic faux tortoise shell frames fit for a middle aged accountant.  But I could get the hat right.

I started with a cheap gray felt hat I bought at a souvenir stand at Cheyenne Frontier Days.  It was supposed to be a Confederate hat and had a paper Stars and Bars Flag sticker on the front.  I was a loyal Union man and spent hours trying to get all vestiges of that peeled off.  The hat did have a satisfyingly military looking gold cord band with end tassels.  I pinned up one side with a brass US collar insignia from my Dad’s World War II uniform.  It made a satisfying reproduction of Col. Roosevelt’s famous Rough Rider campaign hat.

At first I decorated it with a long pheasant tail feather, but discarded that when I realized that no photo showed my beloved Teddy sporting such a plume.  I wore that increasingly battered hat every single day from the moment I got out of bed to the time I turned in at night—except when required to remove it at school or church—for almost three years until it practically disintegrated, and my head got too big.  Needless to say, I attracted a lot of gaping stares.  And the bullies were unimpressed by its martial appearance.

The hat was useful in the back yard fantasy games I played largely by myself.  None of the other neighborhood kids, least of all twin brother Tim who was running with a faster older crowd and already smoking cigarettes in their fort/club house, were interested in daily charges up San Juan Hill or whatever other adventures I could conjure.  My red and white Firestone coaster brake bicycle with the plastic streamers on the hand grips had to be my noble steed.

Alas, there are no extant photos of me in my Rough Rider hat, although I know that several were snapped on our old Kodak Brownie Box Camera.  My mom, likely out of shame and humiliation, left them out of her meticulously maintained photo albums and they can’t even be located in the unsorted shoe boxes of old photos.

School was a place where my obsession played out with a bit of drama.  I started handing in my homework, busy work Ditto activity sheets, quizzes, and tests with the correct day of the month underneath my name but instead of 1959 listing the year as 1905, the year after Roosevelt’s election to a full term on his own. I picked the year because the old movies I watched on TV when I got home from school painted that era as sunny, pleasant, and free from looming nuclear annihilation—something that was constantly on our minds in Cheyenne where the Air Force was beginning to build the nation’s first ICBM missile base and which, the civic boast proclaimed, would be a top target for Commie obliteration.  The movies, mostly musicals and comedies like Meet Me in St. Louis or Life With Father were all made in the ‘30’ and ‘40’s when many ticket buyers were of an age to recall those days with wistful nostalgia.  Most depicted the comfortable middle class in large homes with live-in servants.  It seemed to me that Teddy Roosevelt ruled over an ideal time to be alive. 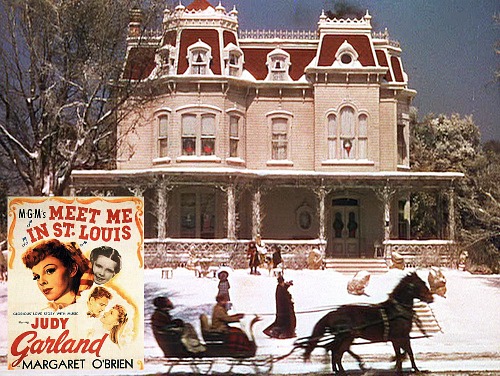 The comfortable family life depicted in movies like Meet Me in St. Louis made me long to live in the days of Teddy Roosevelt's Presidency. After all, no Ruskie was apt to drop a nuke on this house...


So I decided that, come hell or high water, I would live then.  Neither my teachers, nor the Principal at Eastridge Elementary where I was routinely sent for an attitude adjustment, were amused by this quirk.  They demanded that I use the correct date and used every punishment in their arsenal to compel my acquiescence.  For a while I was given an F (actually a 5 because Cheyenne Public Schools were then using an odd numerical grading system) on every paper I turned in with the wrong year.  But I was a student reading at the level of a senior in high School and in subjects like social studies and science showed every evidence of complete mastery of the lessons.  Of course my spelling was atrocious, my hand writing cramped and nearly illegible, and I was too bored by arithmetic to bother with accurate computations and, it would be discovered much later, was mildly dyslexic compounding that problem.  Despite my wildly uneven academic performance, eventually it was decided that it was hopeless the hold the date thing against my grades.  Besides, if the teachers kept it up, I would be held back for another year and they would be stuck with me again.

So, they tried keeping me in for recess.  Hardly a punishment as it kept me from getting beat up on the playground.  While the others were outside running around and screaming, I was happily alone in the classroom partaking of my favorite activity—reading.  Keeping me after school was no skin off my nose either.  Things were not all that rosy at home where my Mom was battling mental health and rage issues and I was the #1 object of her wrath and dissatisfaction with the hand life had dealt her.  Of course, that also meant that when the school sent home notes complaining about my stubborn misdating, she took it as a purposeful disgrace to the family—the gravest of all possible offenses.  Then out would come the wire handle of the fly swatter, down would drop my jeans and underwear and my ass got whipped to hamburger.

None of it mattered.  I just kept entering that date, and dreaming of the time and place where nothing like that happened. 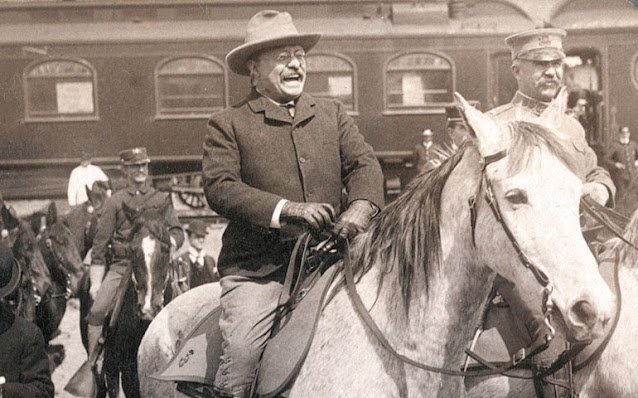 Roosevelt made several visits to Wyoming including this 1902 Presidential visit to Yellowstone National Park.  A special full scale rodeo was once put on for him in Cheyenne at the Frontier Days grounds.  Several Wyoming cowboys had joined his Rough Riders and other were ready to sign up for the new volunteer cavalry unit that Woodrow Wilson would not let him raise for World War I.


The whole thing lasted almost three years until I entered Junior High School and just let it all slide for new dreams and obsessions, every bit as weird perhaps, but not as apt to draw notice.

Then in a few more years I would discover the underside of 1905 and the Roosevelt utopia—the world of vicious capitalist exploitation of working people, their resistance and rebellion, of open class war, Jim Crow, lynchings, and of nasty little imperialist wars.

But that’s another story….

Posted by Patrick Murfin at 5:55 AM