The Women of Iceland Stopped Working One Day And Everything Changed 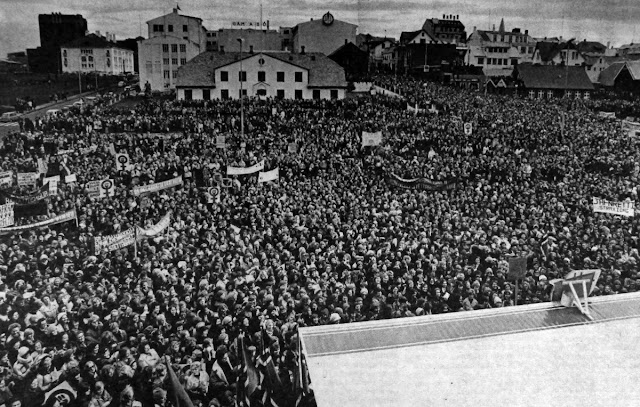 Ah, plucky Iceland, how we love you!  Although you missed the news if you relied on mainstream media, in 2015 Iceland sent 26 of its once powerful bankers to prison for their part in the schemes that led up to the 2008 economic crisis which nearly destroyed the economy.  No country fell harder than Iceland in the worldwide crisis.  But almost alone it did not react by scrambling to bail out the banks whose reckless conduct brought on the disaster.  Instead, the banks were allowed to fail, and new ones were created to serve the domestic economy.  Stockholders and foreign depositors attracted by the old banks’ debt-driven swashbuckling in world financial markets were allowed to eat their losses while the new state owned banks protected and guaranteed Icelandic depositors and forgave much mortgage debt.  The policy drew howls of protest from the world banking establishment and not a few dire threats.   As a result, the country saw an arduous and difficult recovery, but one that has outpaced the somewhat stagnant recoveries of the U.S. and Europe.

Much of the credit for the successful turn-around went to the government of Social Democratic Alliance Prime Minister Jóhanna Sigurðardóttir which came to power after weeks of outraged street demonstrations forced the resignation Geir Hilmar Haarde, a backer of the banking deregulation policy that led to the crisis.  Haarde was later brought to trial himself for his part the collapse and convicted on one relatively minor count for essentially negligence.

Sigurðardóttir was a former trade union activist and the first openly lesbian head of government in the world.  The former flight attendant began her political career with her election to the Althing—parliament—in 1978.  To get there she was a beneficiary of one of the most unique, powerful, and successful protest movement in world history.

It was called, with typical Icelandic understatement, the Women’s Day Off.  In reality it was a hugely successful one day general strike by women that was embraced by female members of all political parties, trade unions, and professional associations in protest to the significant wage gap between the genders, barriers to advancement, and the lack of support services like childcare.

The idea originated with the Red Stockings, a radical women’s movement founded in 1970 during the international surge of militant feminism.  It took a while for the idea to take hold.  Some women were initially put off by the rhetoric and confrontational style of the militants, but it began to gain momentum within the trade unions where women had been fighting for equal pay for some time.  Leadership of the movement to call a strike broadened and the new name of Women’s Day Off was more acceptable to some middle class and professional women than general strike. 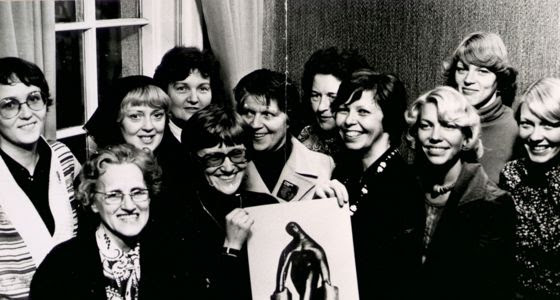 Some of the organizers for the Women's Day Off..


A date was set.  No one was entirely sure what to expect or how successful it would be.  Many thought it would be largely confined to labor movement women, students, and those radical feminists.  A turn out of a few thousand to a scheduled Reykjavik rally and a walk-out of maybe half the women in the country would have been considered a great victory.  But the call not only included employed women, but homemakers and mothers resentful that work was not respected or compensated and fed up, like women everywhere, with the failure of the men in their lives to share domestic responsibilities.

In the weeks and days leading to the event an excited chatter spread across the country.  Women were asking each other, are you doing it?  Conversations swirled around workplaces, schools, and among generations of family members.  Many women were unsure of what they would do right up to the last moment.  But in the infectious joy empowerment doubters and wafflers gleefully joined their sisters.

It has been estimated that 95% of all Icelandic women participated in the Day Off, a rate of participation unmatched by any general strike in history.  Forty-eight years ago, today on October 24, 1975 25,000 women gathered in Reykjavik’s central square for a rally—that alone was 10% of the total Icelandic population of 250,000.  For comparison, a gathering of 10% of the current U.S. population would be more than 33 million people.  Rallies were also held in twenty other Icelandic cities and towns. 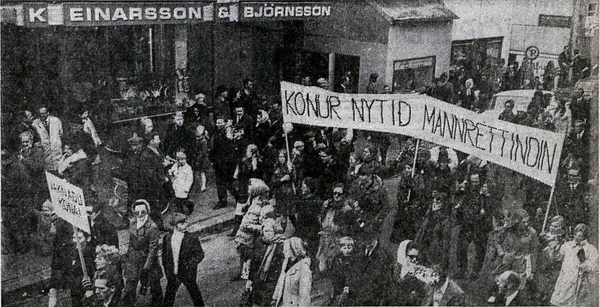 Icelandic women took to the streets.  Notice men with children observing from the sidewalk.


How universal was the strike?  Few businesses had any female employees report to work, including managers.  Many had to close entirely for the day, as did schools without teachers, and many government agencies.  Those that remained open had to cope with their male workers bringing their children with them to work because women refused to do any childcare, house cleaning, or cooking that day or had male workers who had to stay home to take care of the children. On Icelandic television and radio broadcasts covering the Day Off noisy children could be heard in the background—and occasionally glimpsed running through the set.

At the Reykjavik rally women of all ages and social classes mingled and embraced one another.  They heard a parade of speakers punctuated with singing and chants.  Among the speakers who moved the crowd was Adalheidur Bjarnfredsdottir representing Sokn, the union of the cleaners and other the lowest paid women in Iceland.  With no public speaking experience she roused the crowd, “Men have governed the world since time immemorial and what has the world been like?”  She described a world soaked in blood, polluted, and exploited to the point of ruin.  Surely women could do better.

Despite its size and militancy, the strike and the nation-wide rallies were completely peaceful.  The authorities made no effort to stop or ban it, and the police stood to the side with nothing to do.

Many women also recall the general lack of attack by men.  There was plenty of skepticism and puzzlement, but no counterdemonstrations, few displays of anger, and retribution on the job or even docking pay for the time off was rare.  Many men expressed sympathy, and others were enlightened by experiencing the double burden of paid employment and childcare.  Some attitudes were genuinely changed.  But while women look back on the day with pride and enthusiasm, many men ruefully recall what they came to call as The Long Friday.

As if by magic at the stroke of midnight women took up their work again.  Those who were scheduled for overnight shifts came quietly back to work.  The women at the nation’s largest newspaper, who represented more than 60% of the reporters and editors returned to their desks and worked to get out a shortened 16 page Saturday edition containing nothing but news of the strike.

Unlike many mass protests, the Women’s Day Off produced tangible results as well as facilitating a paradigm shift in Icelandic society and culture.  In 1976 Iceland formed the Gender Equality Council and passed the Gender Equality Act, which outlawed gender discrimination in workplaces and schools.  Other reforms, including childcare provisions and paternal leave for parents of both sexes followed.  At the time of the strike women had held the franchise to vote since 1915 but in 1975 only three were sitting in the Althing, 5% of the total membership which lagged well behind other Scandinavian countries which averaged 15% female representation in their parliaments.  Subsequently many participants in the strike were moved to run for office and a movement to empower female candidates was embraced by most parties.  Within the first decade the percentage of female elected officials at all levels skyrocketed. 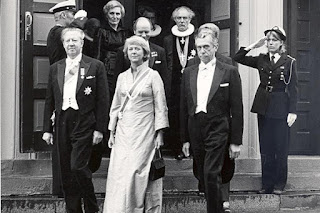 
That included the election of Vigdis Finnbogadottir, a divorced single mother as President in 1980.  She became the first elected woman head of state in the world.  She was reelected three more times and held office for 16 years, longer than any other female head of state.

Not to say all was perfect.  In 2005 on the 30th anniversary of the Day Off the gap between male and female wages had slipped back and women were making only 64% of men.  A new strike was called and the issue returned to the forefront of national attention with new reforms following. 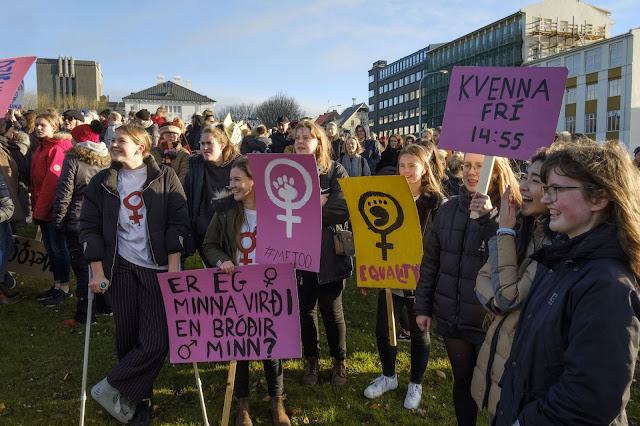 In 2015 Icelandic women once again took to the streets to protest the creeping wage gap.


Today, despite setbacks due to the near economic collapse, Iceland may be the best country in the world for women.   The wage gap has not been erased, but it is the lowest in the world.  The country has the highest percentage of female employment in the world.  Men and women are employed at nearly identical rates, but women represent a majority of skilled positions and a little more than 40% of leadership and management.  Childcare is universally available and of excellent quality.  Family stress is reduced as both women and men get generous leave on the arrival of a new baby or adoption and family leave to deal with emergencies.  An excellent national healthcare system covers the full spectrum reproductive health services.  Women outnumber men as university students, including those pursuing advanced degrees—very important in one of the most highly educated societies on Earth.  In politics, 44% of Althing seats are held by women and women have a majority of portfolios in the Cabinet and head many important departments.

And if things do not continue to improve or if, as an Icelandic proverb has it “the snows fill up the footprints” and thing back slide again, well, women are always ready for another Day Off.

Posted by Patrick Murfin at 6:39 AM