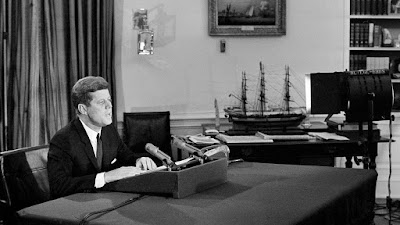 Dad and I listened on the car radio when President Kennedy addressed the nation about the Cuban Missile Crisis and his eye ball to eyeball showdown with the Soviets.

Note—58 years ago this week the Cuban Missile Crisis riveted and terrified the American public, including a 13 year old in Cheyenne. This is my recycled memoir of that.

I was in my father’s car.  I believe it was his official State of Wyoming 1962 Chevrolet station wagon.  We had the radio on.  Dad was doing me a favor.  He was a man of infinite patience that way.  We had just visited the Quonset hut that served as the official headquarters of Wyoming Civil Defense.  I had in my lap a box stuffed full of literature on how to build a bomb shelter, plan an emergency evacuation, explanations of the public shelter program, blue tri-fold brochures emblazoned with the triangle-in-a-circle logo of Your Civil Defense! 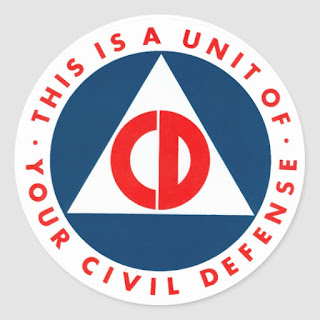 The literature was destined for the Civil Defense office that I had set up on folding tables outside my basement bedroom.  Ever since the election in 1960 when John Kennedy kept talking about the missile gap I had been obsessed with what seemed like an inevitable nuclear war.

In Cheyenne, where America’s first ICBM base had been built at Francis E. Warren Air Force Base, it was hard to avoid.  It was a matter of some civic pride that the missile base made us “one of the top ten nuclear targets.”  Students at Eastwood Elementary School regularly conducted air raid drills.  Sometimes we were instructed to duck under our desks and cover our heads with a thick textbook.  Other times we were taken out to the empty field across the street and told to lie face down with our hand interlaced behind our heads.  This was so the atomic blast could “roll over us.” We were also told not to look up lest the flash of the exploding bomb burn our eyeballs out.

Other kids might have shrugged it off.  But I was a patriot.  I wanted to do something for my country, just like President Kennedy had said.  I was informed.  I read both the Wyoming Eagle and the Tribune and got my own copy of Time every week in the mail.  Ok, it may have been a little unusual for a thirteen year old boy, but that’s the way I was. 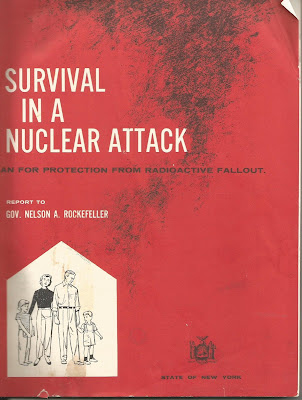 The Rockefeller civil defense report helped set off the fallout shelter craze of the early '60's.  I read it avidly and took it to heart.

At some point I had gotten a hold of New York Governor Nelson Rockefeller’s report on Civil Defense and actually read it.  It was meant to shore up a proposal that the state of New York build public shelters, but it had become the inspiration for the fall-out shelter craze that was sweeping the nation.  I was among those swept.  For some months I had been visiting the CD Quonset hut and gathering literature.   I obtained a nice Civil Defense decal which I put on the glass of our front storm door.  I even found a real white Civil Defense helmet from World War II at an Army surplus store.  I buttonholed everyone I could think of to promote preparedness.

And my Dad took in stride.  Maybe he knew that I just felt better thinking that there was something that I could do.  He drove me on my trips to the Quonset hut and probably used his clout as a member of the Wyoming cabinet to get them to give me all the literature I wanted.  They had plenty. 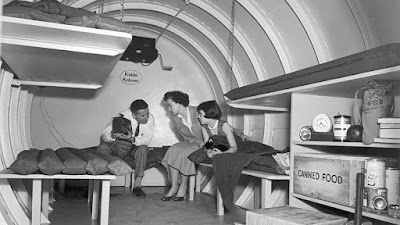 Despite his tolerance of my obsession, Dad refused to build a backyard fallout shelter.


But despite my pleas, Dad would not build us our own shelter.  Not for him the trouble and expense of digging a big hole in the backyard, lining it with re-enforced concrete, installing a blast proof steal door and an efficient ventilation system, stocking it with food and water for our family of four for at least six months, and, yes keeping a good rifle on hand to shoot the improvident neighbors who had not planned ahead.  No, he just wouldn’t do it.  Secretly, looking back on it, I suspect that he knew an atomic explosion in the neighborhood with either not survivable or not worth surviving.

Anyway, that’s what we were doing at 5 pm Mountain Standard Time on October 21, 1962 when Kissin’ KIMN out of Denver, Colorado interrupted their regular broadcast of top 40 rock ‘n’ roll “to bring you the President of the United States.”  We drove home in silence listening to details of our confrontation the Communist Russia over those missiles in Cuba.

Except for school time, I was glued to the TV set for the next two weeks eager to hear any glimmer of news.  Late at night I used Dad’s old Atwater Kent table radio which could pick up short wave broadcasts from just about anywhere, including the BBC and even English language broadcasts from Radio Havana.  We all breathed easier when we got the word that the Ruskies had folded and were shipping their rockets back home. 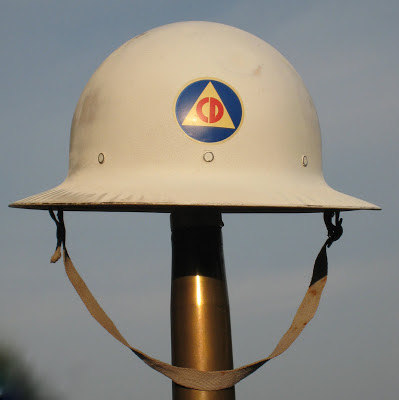 I found a World War II Civil Defense helmet like this at the Army surplus store.

But what about next time?  There was sure to be a next time.  I got to thinking about those school drills and decided that they were not enough.  The school needed a real Civil Defense plan.  So, I started writing one.  I typed copies out on my new Sterling Smith-Corona portable with several sheets of onion skin and carbon paper.  Each homeroom, I proposed, should have an elected student Warden to help the teacher with evacuation plans and keep order.  The Wardens should be equipped with helmets, webbed belts with a water canteen and first aid kit, and police night stick just in case there was panic.  I went down to the Army surplus store and priced helmets and clubs.  In addition, each classroom was to have a box containing emergency supplies, which students would be required to bring from home—things like toilet paper and bags for excrement, bandages and first aid supplies, a flashlight, a transistor radio, and plenty of batteries.  In case of an attack the Warden and teacher were to scoop up the box and guide the class in an orderly manner to a designated shelter, which would adequately be stocked with K-rations and drums of water.

One morning I took my bundle of papers and presented them to the Principal, who solemnly accepted them.  He told me he would take the matter up with the School Board.  And he actually did!  A few weeks later I was told that my plan had been approved not just for Eastridge, but for the entire school system.  Of course, they made some changes.  The helmets and night sticks were out, but they would allow the student Wardens to have nice official looking arm bands.  They had students in the Junior High shop classes make boxes from galvanized sheet metal.  Every home room got one and kids got lists of what to bring from home to fill them. 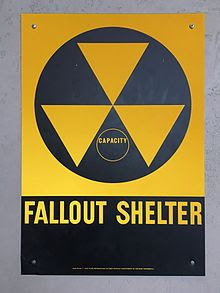 These signs were ubiquitous in public buildings, schools, large office and commercial structures, and other places.  You could occasionally find them well into the current century long after the shelters they marked were abandoned or forgotten.


Sometime the next spring there were elections for student Wardens.  Everyone in the school knew that the whole thing was my idea.  But in my homeroom, I was not even nominated.  One of the popular kids, one of the guys who were always picked first in gym class, was elected unanimously.

The next week when the student Wardens had their first meeting to organize and learn about the program after school, I just went home.  The Principle asked me why I had not come to explain my plan.  I told him that I wasn’t elected and didn’t feel I should.  He shrugged and went about his business.