The Day Things Turned Up for a Battered United Kingdom 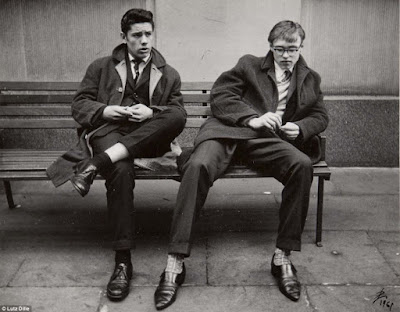 Britain was a bleak place in the early '60s and young men like these faced dim prospects of unemployment and life on the Doll.

Looking back on it October 5, 1962 was an exceptionally good day for our cousins across the Pond.  And they really needed it.  Things had been going downhill there for a long time.  Two World Wars had killed off huge swaths of two generations.  London, and to a lesser extent, other cities were still trying to rise from the rubble of bombs dropped more than two decades before.

British industrial infrastructure was largely ageing and obsolete.  The supremacy it once enjoyed was being challenged, largely by modern facilities and high levels of engineering from a Europe rebuilt on the American Marshall Plan dime—aid the prideful Brits had turned down.  Unemployment was high and seemingly permanent.  Intellectuals fretted over the effects of generational dependency on the dole.

Class resentments ran high in both directions.  British theater and cinema, once symbolized by the sophisticated drawing room comedies by the likes of Noel Coward, were now the province of the Angry Young Men and their, bitter, hopeless working class perspectives.

The Empire upon which once “the sun never set” was crumbling, its jewels—India and Pakistan—long gone and remaining possessions in Africa, Asia, and around the Caribbean either in open rebellion or restive.

But two events that by delightful happenstance occurred on the same day changed a lot of that.  Or at least they energized British culture and opened the way for a decade of cultural flowering when swinging, Mod London once again seemed the center of the universe and the world was spending money on British music, fashion, design, and cinema.

Both events, somewhat ironically, owed a lot to the very Americans who had replaced them as the undisputed power of the world.  Now, if they could not regain past glory entirely, they could, in a phrase much used later in the decade, at least be the new Greeks to the new Roman Empire. 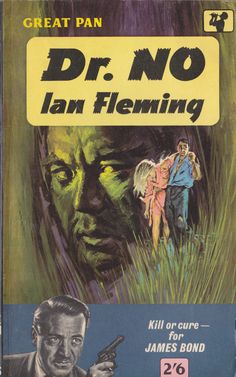 Ian Fleming's spy adventures with their lurid pulp covers were a popular sensation in Britain.  They and books  like them would be the later inspiration for the song Paperback Writer.  In this printing of the book issued when tabloid gossip about casting James Bond for the movie, a bottom banner was added to the original illustration.  Note the more than casual resemblance of the spy to David Niven, then mentioned as one of the candidates for the role.


Dr. No, the first of what would go on to be a fabulously successful film franchise, opened in London on October 5, 1962 at the Pavilion Theater.  The film was based on a spy novel by Ian Fleming, himself a former World War II secret agent.  James Bond was a popular paperback hero in the UK and in Europe but was relatively unknown in the U.S.

While nominally a British production of Eon Productions, it was essentially brought to the screen by a partnership of Canadian Harry Saltzman and hustling American entrepreneur Albert R. Broccoli, better known as Cubby.  Saltzman had obtained the rights to Dr. No, the second book in the Bond series, while Broccoli had obtained rights to the series from Fleming.  When Saltzman refused to sell out to Broccoli, a production partnership was formed that included Eon Productions and a holding company, Danjaq, LLC, which owned the copyrights, trademarks, and marketing licensing for the series. The partnership endured through several films and ended amid acrimony and complicated lawsuits when a bitter Saltzman was forced to sell his half of Dajaq to United Artists, the film’s distributor.  That left Broccoli, and later his family heirs, in complete control of the franchise.

Dr. No was shot on a relatively low $1 million budget mostly at England’s Pinewood Studios with extensive location shooting in the Bahamas and elsewhere.  The script largely by Richard Maibaum took extensive liberties with Fleming’s novel and injected considerable wry humor, mostly as a way of softening the violence and hyper-sexuality that the producers feared would make it a target of the still active American film censors.

Casting the critical lead was a problem.  Everyone thought that the obvious choice for Bond was the suave Cary Grant.  And Grant was interested in doing the part.  But he would only commit to one film and Broccoli already envisioned a long running series.  David Niven was considered but thought to be too old.  Niven ended up playing one of several Bonds in the spoof film Casino Royal—Fleming had earlier sold the rights to his first Bond book separately.  Fleming was said to be pushing Richard Todd.  Patrick McGoohan, who had already had success as a spy in the British television series Danger Man, was also in the running.

In the end Broccoli settled on Sean Connery, a scruffy, working class Scott personally totally unfamiliar with the high rolling, tuxedo clad world of the Bond novels but who exuded masculine energy and charismatic charm.  Connery’s only major film role had been as a cheerful Irish peasant in Disney’s fantasy, Darby O’Gill and the Little People. Director Terrance Young put Connery through a quick introduction to Bond’s world and made sure he was well tailored and coiffed. 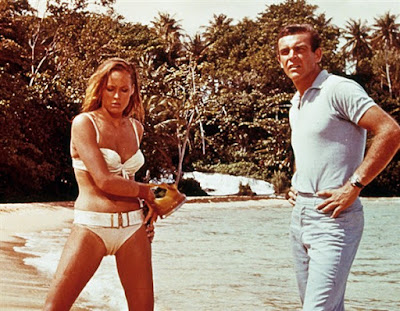 Hyper masculine Sean Connery and hot babes like Ursula Andress in a bikini instantly made James Bond a bankable film franchise and a cultural icon.


The film introduced all of the elements that would become hallmarks of the film franchise—the stylized opening sequence to a pop power ballad, Bond as the suave ruler of the casino and irresistible seducer of women, the technical gadgets, and maybe above all the Bond Girls. Ursula Andress was the first, emerging from the sea in a Bikini with a knife at her belt.

Dr. No and subsequent Bond films made England sexy and chic all over again. Meanwhile four other scruffy young men made their recording debut the same day.

Love Me Do, the first single from a quartet that had been setting the dingy clubs of Liverpool afire, was released by EMI on October 5, 1962.  The B side was P.S. I Love You. 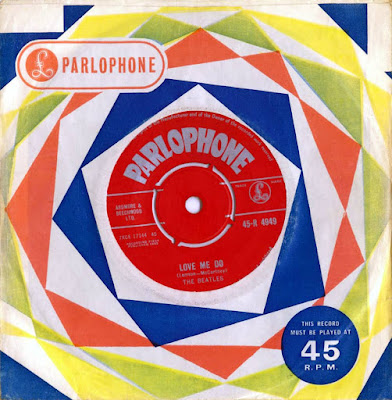 The Beatles' first U.K release in its original sleeve.  Parlophone was a less prestigious label for recording giant EMI.

As auspicious as it seems now, the first release by the Beatles did not attract quite so much attention as the premier of Dr. No.  But it was successful, reaching #17 on the British charts and launching the recording career of the band with a solid hit.  The same recording was re-released in England two years later when the Lads were top stars and went to #4.  Its 1964 release in the United States became one of the bands many #1 hits.

The A side was written mostly by Paul McCartney when he was about 16 years old.  By that time, he already had an agreement with John Lennon to share credit on all songs.  Typically, one or another of them would work something up and they would try it out.  The other one would often add elements, work on lyrics, or arrange it for the band.  Only occasionally would they, at this point sit down together to write.  But the process worked well and sometimes if the original pages scrawled in school notebooks were lost, even the boys had a hard time remembering who contributed what.

In this case John contributed the middle eight bars when the key and tempo shift.  He also worked out a bluesy mouth harp part.  American rock and roll was their inspiration.  In this case they drew on the Everly Brothers for the tight two part harmonies that were becoming a trademark of the developing band.  John frankly credited the harmonica riffs to folk bluesmen Sonny Terry and Brownie McGee—the same performers who were influencing young Bobby Zimmermann about the same time.

On the flip side, P.S. I Love You was penned exclusively by Paul a few years later while the band was playing in Hamburg.  Neither Lennon nor McCartney could recall any contribution by John.  And Paul later denied rumors that it was written for a German girlfriend.  Instead, he wanted to use a letter as a hook and do a song about separated love similar to The Shirelles’ big hit earlier in 1962 Solider Boy.

Paul wanted P.S. I Love You to be saved for later release as an A side, but was told that there were other songs that had used the same title and that the label would only consider it for a B side and later inclusion in an album. 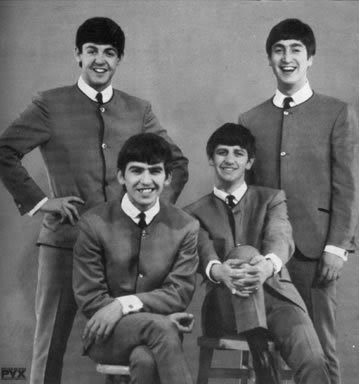 The Beatles in 1963.  Ringo Starr had just been added to the band and barely made their first hit recording.  The Lads' haircuts and fashion helped establish the Mod look which became the lucrative symbol for swinging London.


The sessions came as the band was in turmoil.  Martin did not think long time Beatles drummer Pete Best was good enough for recording.  He suggested bringing in a studio drummer as replacement.  But Lennon and McCartney had already fired Best and were bringing on journeyman band drummer Ringo Starr.  Love Me Do was actually recorded three times.  The first with Best in his last session with the band in a demo made in June, then with Ringo behind the drum kit, and finally with studio musician Andy White.   Martin was also unimpressed with Ringo’s performance.  In the final session Ringo was reduced to playing tambourine to White’s sticks.

In the end Martin must have decided that Ringo was good enough after all because that was the take put on the final release.  White’s version turned up later in albums released in both Britain and the US.

That final recording session with White was used for P.S. I Love You, this time with Ringo playing the maracas.

Over the next year, however, the Beatles appeared on several BBC programs both live and taped at BBC studios.  In each case Ring did the drumming on both numbers, as he did at the band’s live shows.  He was quickly working his way into the heart of the band with unflashy, but rock solid drumming.

Within a year the Beatles scored multiple hits on the British charts, seemingly climbing higher with each new 45 issued.  They were playing to sellout crowds of screaming female fans.  The records did just as well in Europe.  The band was well on its way to international stardom.  The lads bowl cut hairdos, collarless suit coats, and pointed ankle boots set fashion trends. Beatlmania well on its way by the time the boys arrived in New York to introduce themselves to American audiences in late 1963.

By the middle of the decade tax revenue from Beatles recordings, films and associated merchandise and memorabilia was pouring into the Exchequer.  And the Beatles were just the tip of the spear.  It turned out that there were more young bands inspired by American blues and rock and roll ready to break out as well.  In the States the British Invasion nearly blew America rockers out of the water. 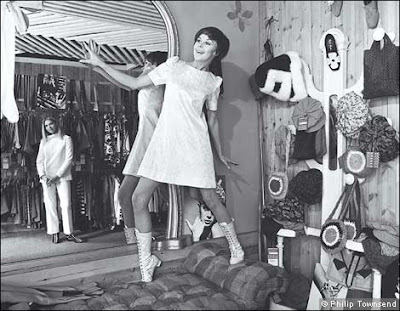 The Carnaby Street look set fashion around the world and helped fuel a British cultural and economic comeback.

The youth culture represented by the Beatles would inspire the Mods, as the Rolling Stones would their motorcycle riding rivals the Rockers.  Both would contribute a new British sense of style.  Britain, famous for tweeds and shapeless woolens, and a long mocked symbol of frumpiness was soon the center of the fashion world as the Carnaby Street look swept the world.

Posted by Patrick Murfin at 5:46 AM