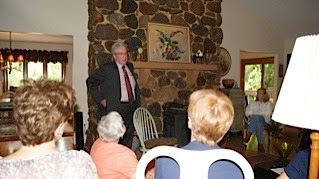 Dennis Anderson, a Democratic Party candidate for Congress in the new 14th Congressional District, will host a town hall meeting in Woodstock on Wednesday, August 1 from 6 to 8 PM at the Woodstock Public Library, 414 West Judd Street.

The meeting will cover a variety of issues including the role of the Federal government, the economy, and healthcare.

Town Hall Forums are not a new concept.  They originate in colonial America.   The first meeting of voters occurred in Dorchester, Massachusetts in 1633.  Although a New England phenomena, Thomas Jefferson once called them the “wisest invention ever devised by the wit of man for the perfect exercise of government.”

However, town hall meetings have fallen into decline.  In Illinois, Township governments are required to hold one each year to adopt a budget and conduct other business.  In the smallest townships, election of official are still conducted at the meeting, although conventional elections have generally replaced that part of the agenda.

In recent years they have become a favorite of campaigns.  Elected officials and candidates alike, during election years, hold a series of town halls designed to talk about issues with voters.  In recent years, they have drawn the most extreme elements of both parties, who have seen it as an opportunity to assail members of the political opposition.

The Anderson campaign is hoping to return the Town Hall meeting to a thoughtful discussion of issues between candidate and the voting public and avoiding, if possible, shallow posturing and theatrics.

Sounds like a good idea to me.  Join Dennis tomorrow if you agree.

For more information regarding the Town hall, or to RSVP, contact the campaign office at (815) 444-0305.  And visit http://www.dennisforcongress.com/

Posted by Patrick Murfin at 4:03 PM