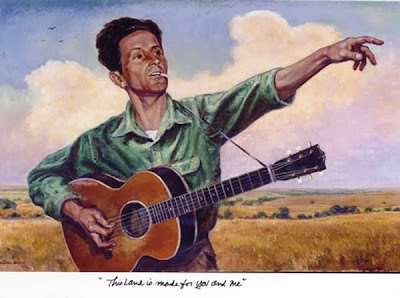 Woodrow Wilson Guthrie of Okemah, Oklahoma would have turned 100 years old today.  Of course the ravages of Huntington’s chorea killed him in 1967 long before he could reach this milestone.
Although his family back in Oklahoma probably didn’t realize it at the time, sharing is birthday with the French Revolutionary celebration of Bastille Day could not have been more appropriate.  Woody spent his life storming the citadels of privilege, power, and oppression armed only with his guitar, sketch pad, and a writer’s pen and tablet.
He never became a big star, though millions knew his name.  There is only one known brief film clip of him performing and despite having his own California radio program before World War II, only one recording of a live performance.  Of course the studio recordings that he made as a member of the Almanac Singers his New York lefty pals Pete Seeger, Cisco Huston, Bess Lomax, Sis Cunningham and others, Dust Bowl recordings for Alan Lomax, and the hours of recordings he later did for Moe Asch of Folkways Records provided both a chronicle of his time and an inspiration for generations of protest and folk singers.
His witty column Woody Sez in the Communist Party newspaper The Daily Worker accompanied by his own cartoons was widely followed despite his reluctance to actually join the Party and subject himself to its discipline.  He created his own myth in his fictionalized autobiography Bound for Glory.
Despite being hospitalized and increasingly disabled for most of the last 20 years of his life, Woody’s influence grew.  His old pal Pete Seeger saw to that and so did new generations of performers like Peter, Paul and  Mary and a funny kid from Minnesota.
Woody’s centennial is being celebrated with all of the hoopla he deserves.  His old home state of Oklahoma, now run by a breed of particularly loony Republican ass hats in a country where the competition is fierce, finally saw enough dollar signs in tourism generated by pilgrimages by Woody’s fans that it seems to be semi-embracing him while playing down his populism and radicalism.  The George Kaiser Foundation purchased materials from the Guthrie family with the intention of opening a museum dedicated to the singer-songwriter in Tulsa, Oklahoma.  The new museum will not open, as originally planned, in time for the centennial.  It is drawing criticism for its announced plans to concentrate of Guthrie’s “cultural contributions and not on his political opinions.”  As if those could be separated.
Various special events have been going on all year.  Notably the Grammy Museum in Los Angeles hosted a concert by Woody’s folk singing son Arlo and other notable musicians in April along with a whole week’s worth of lectures, panel discussions and other special programs.
There have been plays, television documentaries, and dozens of memorial concerts across the country.  His hometown of Okemah is capping several days of a now annual Woody Guthrie Festival tonight with another performance by Arlo and friends.  There are several nights of Woodyfest in New York City hosted by Steve Earle with a rotating cast of modern musicians influenced by Guthrie.  Most anticipated of all, perhaps, is the free Guthrie Family Reunion concert for tomorrow night at Central Park’s SumerStage.
Every 100 Years: The Woody Guthrie Songbook 100 Years 100 Songs, a 150-page large-format book with three CDs containing 57 tracks has just been published. It  features not only the words and music to Woody’s most famous and familiar songs, it also includes new music set to Woody’s words by artists like Billy Bragg, Wilco, Dropkick Murphys, Tom Morello, a project of Woody’s daughter Nora Guthrie.

And Woody’s fans are really excited that his unpublished Dust Bowl novel House of Earth, based on his experiences in the Texas Panhandle before he headed to California, is set to be published this fall.  Interestingly, it is being edited and prepared for publication by bestselling biographer Douglas Brinkley, and quirky movie star Johnny Depp.

Note: Back in February of 201l I wrote about Guthrie and his most famous composition.  It seems a fitting tribute to join in the celebration by republishing and edited version today.

You can almost picture it in your head.  It’s February 22, 1940.  A skinny Okie fresh into New York City after a few years of moderate success playing on a California radio station for an audience of fellow exiles is sitting alone in room.  Probably in the apartment of an old friend from California, an actor named Will Greer.  It’s the kind someone without much money could afford.  A table, a couple of chairs, a bed in one corner…and a radio.  The radio is on.  The swelling sound of a full orchestra and the powerful voice of Kate Smith belts out—again—Irving Berlin’ God Bless America.  It has been ubiquitous on the radio for almost two years.

Woody Guthrie knows something about America.  He has seen quite a bit of it in the last decade.  And a lot of what he saw wasn’t pretty.  Through the Dust Bowl and the Great Depression he had been with people who had been dispossessed, forgotten, and despised.  He had chronicled their lives and their struggles.  The song rubbed him the wrong way.  Loving America had to be about more than mountains and prairies and “oceans bright with foam.”  And he was sure as hell not sure that God had blessed the place or that folks should ask him to.

Snuffing out his cigarette, Guthrie reaches for a battered notebook and a pencil stub.  He begins to write…

Maybe it happened that way, maybe not.  At any rate the self trained songwriter did not take long to finish a song.  He called it, at first, God Blessed America for Me.  It had the same reverence for geography, but hinted that geography was traveled and lived in, “as I went walking that ribbon of highway.”  And it also laid claim to ownership of the land that “was made for you and me.”

The tune was adapted from snatches of an old Baptist hymn, Oh, My Loving Brother and a Carter Family song Little Darlin', Pal of Mine.

Guthrie was new to the big city when he wrote the song.  Geer was just introducing him to a bunch of lefty folk singers loosely based around Greenwich Village including Pete Seeger, Cisco Huston, Lead Belly, Josh White, and Sis Cunningham.  Pretty soon he was singing with a loose group with some of them as part of the Almanac Singers playing mostly union halls, benefits, and Communist Party events.  Guthrie never actually joined the party—he would not subject himself to Party discipline, but he was an enthusiastic fellow traveler and penned a whimsical regular column, Woody Sez in the Daily Worker featuring his own cartoons.

About the same time he was being interviewed by Library of Congress folklorist Allan Lomax who recorded hours of conversations and songs.  Lomax helped Guthrie sign with Victor Records.  That summer the label released two three disc collections know as the Dust Bowl Ballads.  While not huge commercial successes, the recordings were instant classics and established Guthrie as the leader of a thriving American folk music scene.

But his song about America was not on those recordings.  He played it some in personal appearances.  He tinkered with the lyrics, sometimes adding new verses, sometime omitting his last two original verses.  He began calling the song simply This Land is My Land after the opening words of the chorus.  Guthrie did not get around to recording it until April of 1944 in one of his many sessions for Moses Asch’s Folkway label.

The song was not published until 1951 when it was issued in a mimeographed collection of Guthrie’s song lyrics meant for distribution at schools and sold for 25¢.  The booklet contained ten typewritten songs and cartoons by Guthrie.  Despite not being actually produced and distributed until 1951, Guthrie copyrighted the content in 1945. Probably for space reasons this edition left out the last “political” verses to the song.  Although Guthrie sang a couple of variations of those verses, the most commonly in use now are:

As I went walking I saw a sign there
And on the sign it said "No Trespassing."
But on the other side it didn't say nothing,
That side was made for you and me.

In the squares of the city, In the shadow of a steeple;
By the relief office, I'd seen my people.
As they stood there hungry, I stood there asking,
Is this land made for you and me?

By the way, if you happen to have a copy of one of those mimeographed pamphlets, hang on to it.  It is worth more money than a lot first editions in fine bindings.

In 1955 Ludlow Music finally issued a professionally printed edition of the song.  It also claimed copyright, which has been disputed.

By the early1960’s the shortened, apolitical version of the song had become a staple of the burgeoning folk music scene thanks to that little 25¢ pamphlet and the Folkways recordings. One young admirer, Robert Zimmerman of Minnesota set out for New York to meet his hero.  Guthrie by that time was hospitalized in the final throws of his long battle with Huntington’s chorea.  As Bob Dylan he recorded This Land is Your Land and it became an anthem for a new generation.  Guthrie’s old friend Seeger, Joan Baez, and Peter, Paul, and Mary all frequently performed the song, which was adopted by the Civil Rights Movement.

Woody Guthrie died in 1967, his legacy secured in no small part by this one song.  It had become a staple of school music programs.  Generation grew up singing the song as just another patriotic tune.

On January 19, 2009 Pete Seeger joined by his grandson Tao Rodriguez-Seeger and Bruce Springsteen performed the song in the finale of President Barack Obama’s We Are One Inaugural Celebration in Washington, D.C. before an audience estimated to be 400,000 people and millions more at home.  At Seeger’s insistence, they sang the often neglected “political verses.”
Posted by Patrick Murfin at 2:00 AM