A Poem With Heat, Humidity, an Insect and Mayhem—What More Could You Want? 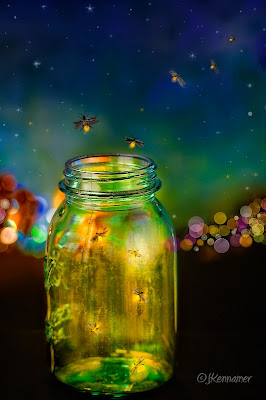 The other day the Rev. Sean Parker Dennison, new minister at the Unitarian Universalist Congregation who is just settling down in new digs in Woodstock made a casual post on Facebook.  He mentioned that his partner, Toni Palmer is scared of fireflies.  Seems they remind him of sparks exploding off of a campfire.  Those can be hot.
Of course that let Toni in for some good natured ribbing.  After all, for Mid-westerners fireflies are a treasured part of summer.  Many childhood memories were built around collecting them in Mason Jars on steamy summer evenings.
But Toni is from Utah, which may have Mormon crickets but nary a lightning bug.  I can sympathize coming from Cheyenne which was equally as bereft of luminous insects.  But I learned all about them—and collecting them—in our family’s annual trips “back east” to visit our kin in Iowa and Missouri.
Actually, I was a little surprised that Toni even saw more than a stray one or two.  Our weather has been warm enough, but McHenry County has as dry a Dust Bowl homestead.  Fireflies need plenty of moisture and humidity to thrive, not just heat.

Anyway, all of this is just prologue to take up space as I inflict one of my poems on you.  The Ugly Bug was included in my 2004 poetry collection from Skinner House Books We Build Temples in the Heart.  It was also included in Edward Searl’s anthology from the same publisher, In Praise of Animals: A Treasury of Poems, Quotations, and Readings.

I hope this one won’t scare Toni or make him feel any less welcome in these parts.

She comes for a casual stroll across
the page of my half-read book
on a drowsy, humid morning
in someone else’s garden,
an object of passing interest
in the heavy air.

Have I seen this one before?
such an ordinary bug,
s bit ungainly on spindly legs,
long body, beetle-hard wings,
and a touch of red at the thorax,
not very impressive really.
Maybe the adult of some garden pest
larvae poised to strip tomatoes of their leaves?

I close my book—
Bam!
and expect to see
smear of yellow guts on my page
and one less vermin in the world.

But on opening—
a faint and ephemeral green glow.

I have murdered the Fairy
who dances in the gloaming,
winking magic in oppressive air.
—Patrick  Murfin
Posted by Patrick Murfin at 1:48 AM