Telstar and How the Cubs Accidently Got on the First Broadcast 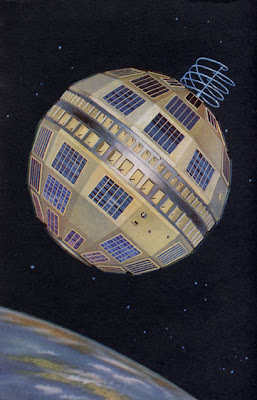 There were a lot of firsts involved when Telstar 1 was launched a top of a Thor-Delta rocket from Cape Canaveral, Florida on July 10, 1962, fifty years ago today.
It was the first active telecommunications satellite, capable of relaying television broadcasts, bundled telephone calls and fax images.
Echo I, launched by the NASA in 1960 had been a glorified weather balloon—a Mylar inflated sphere of which microwave signals could be bounced from one Earth station to another.  Although millions of Americans, me included, spent hours watching darkened skies for the passage of the gleaming object in orbit, Echo’s usefulness as a communications device was more symbolic than real.
Telstar, developed jointly by American Bell Labs, the British General Post Office, and the French National PTT (Post, Telegraph & Telecom Office) was intended to provide an active a practical link across the Atlantic Ocean for multiple communications uses.
Telstar was also the first privately (or public/private because of the original consortium’s socialized European partners) satellite and NASA was paid for its launching facilities, rocket, and support system.
Built at Bell Labs, the satellite resembled a small ball.  It was only was only 34.5 inches in diameter and weighed 177 pounds—about the maximum size for the limited lift capacity of the NASA’s Delta rockets.  It was covered with several innovative solar cells which generated a paltry 14 watts of power.  The solar cells were a breakthrough.  So were the transistors which replaced most of the bulky tubes for radio communications and the traveling-wave tube which helped amplify weak radio signals on their return to earth.  All in all it was a technological marvel.
The satellite was placed in a medium altitude elliptical orbit completed once every 2 hours and 37 minutes.  That meant that Telstar could only be used to relay communications across the Atlantic for about 20 minutes out of every orbit.  Subsequent communications satellites were launched into geosynchronous orbit much higher but stationary in relationship to a point on earth making them continuously operable.
There were launch jitters associated with the Delta rocket, which was less than totally reliable.  A number of launches had ended in spectacular failure.  But Telstar reached orbit successfully.
On July 11 test television images of an American Flag outside the Andover, Maine Earth Station were transmitted to a French station at Pleumeur-Bodou.
Public service was inaugurated in a highly publicized broadcast involving Eurovision on the continent, all three American television networks, and the Canadian Broadcasting Company.  Walter Cronkite, an enthusiastic booster of the space program, and NBC’s Chet Huntley anchored from New York while the BBC’s Richard Dimbleby did the honors from Brussels.
Following live shots of the Statue of Liberty and the Eifel Tower, President John F. Kennedy was slated to make introductory remarks.  But the system acquired satellite connection early and Kennedy was not ready.  Instead viewers were suddenly watching an in-progress game between the Philadelphia Phillies and Chicago Cubs at Wrigley Field.  Mystified Europeans only got to see one play before the broadcast continued with a segment from Washington, D.C., where Kennedy was conducting a news conference and answering a question about the value of the Dollar.  Segments from Cape Canaveral, Quebec, and Stratford, Ontario rounded out the North American portion of the program.
Later in the evening, Telstar began relaying telephone calls and fax messages.
Public excitement was high.  The satellite was featured on the covers of popular magazines, and the subject of many newspaper articles.  For a while an American news broadcast that did not show at least a snippet of news originating in Europe would not have been complete.
The Tornadoes became first English pop group to score a Number 1 hit in the U.S. with their instrumental Telstar.  The song was also covered successfully in this country by The Ventures—the version I remember in Cheyenne—and  Bobby Vinton.
But Telstar’s glory days as the poster child of President Kennedy’s “peaceful uses of outer space” were doomed.  Just one day before the launch the U.S. tested Starfish Prime a high-altitude nuclear bomb which energized the Van Allen Belt in which Telstar was sent into orbit.  In Cold War tit-for-tat the Soviets exploded a similar weapon in October.  The huge increase in radiation over what designers had expected overwhelmed the satellite’s transistors and it failed in December.  Engineers were able to re-start it again in January 1963, but it failed again permanently in February
It was replaced by a nearly identical Telstar 2 in May 1963.  Soon other communications satellites including two RCA Relay units and two Syncom units from the Hughes Aircraft Company were also in service.  Syncom 2 was the first geosynchronous satellite and its successor, Syncom 3, broadcasted pictures from the 1964 Summer Olympics from Tokyo.
By the way, NASA reports that both Telstar 1 and 2 continue to orbit the Earth, just two more pieces of cold, dead space junk.
Posted by Patrick Murfin at 1:54 AM