National Poetry Month—And All that Jazz 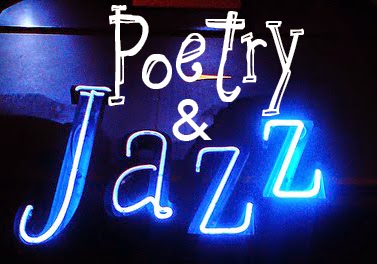 Music and poetry are twins.  Born together when certain apes passed long, dark nights together sharing what they knew, and feared, and yearned for, breath and heartbeat.  Conjoined twins at that—one flesh, one life.  The shepherd David and blind old Homer plucked their harps and sang their verses.  Shamans beat their drums and blew their flutes in their calls on gods and ghosts.  Bards spread their news with lute in hand.  So it had always been.  Poet/singer listeners/dancers sharing the moments together.  Then came the scribes and that bearded German Guttenberg who tore the words away, imprisoning them on parchment and paper to be deciphered in silence by the privileged few who had the key.
Still, songs had lyrics, poetry after all.  The connection was stretched, not broken.
The emergence of Jazz in the early 20th Century reunited the sundered twins and in the process changed poetry, at least in the West, utterly and forever.   Jazz has been called America’s only indigenous art form.  Within a few years of bubbling up from the fecund street of New Orleans it swept the nation and leaped an ocean and was changing—and liberating—every other performance, literary, or fine art.
Poetry was exposed and infected early.  By the World War I era it was adopting jazz syncopations, blues call and response forms, daring sexuality, Black cultural experience, and liberation themes.  Poetry pulsed with new energy and exploded out of conventional forms liberated by the spirit of improvisation.
Just as the White musicians of the Original Dixieland Jass Band were the first to record the essentially Black music in 1917, White poets were among the first to attract a wide audience for jazz poetry.  And none were more important than Vachel Lindsey of Illinois.  As early as 1912, long before most Americans had even heard of jazz, he was incorporating it’s syncopations and rhythms and call and response forms into his most famous—and controversial poem The Congo.  A rare racial liberal at the time he thought he was exposing stereotypes of savagery and protesting the colonial brutality of King Leopold in his private colony.  Most blacks of the day took it as such, although there was some criticism.  Read by later generations in different circumstances it would be labeled racist and another contributor to this survey, Amiri Baraka, would lead a movement that would virtually erase Lindsey from literary memory.  But that was later.  He had come to the defense of the Black population of his beloved Springfield when it was devastated in a 1908 race riot.  Lindsey would continue to use jazz riffs, and often salute Black experience.  In this 1918 piece, praised by W. E. B. Dubois, he saluted the usually ignored contributions of Blacks to the war effort.

The Jazz-bird sings a barnyard song—
A cock-a-doodle bray,
A jingle-bells, a boiler works,
A he-man's roundelay.

The eagle said, ‘My noisy son,
I send you out to fight!’
So the youngster spread his sunflower wings
And roared with all his might.

His headlight eyes went flashing
From Oregon to Maine;
And the land was dark with airships
In the darting Jazz-bird’s train.

Crossing the howling ocean,
His bell-mouth shook the sky;
And the Yankees in the trenches
Gave back the hue and cry.

And Europe had not heard the like—
And Germany went down!
The fowl of steel with clashing claws
Tore off the Kaiser’s crown.

But, of course, Blacks would soon be spreading their own poetic jazz wings and the Harlem Renaissance became ground-zero for the new movement.  The most famous of all of the poets that emerged from that fertile ground and the most closely associated with jazz was Langston Hughes.  Around 1923 Lindsay encountered Hughes, then working as a bus boy in a Washington, D.C. restaurant after having dropped out of Columbia University, a turn as a merchant sailor, and his first trip to Paris.  Hughes showed some of his poetry to Lindsey, who not only was encouraging, but actually helped to boost his early career—something no other White literary figure was ready to do.  Within a couple of years Hughes would emerge at the heart of the Harlem scene with jazz poetry like this.

Droning a drowsy syncopated tune,
Rocking back and forth to a mellow croon,
I heard a Negro play.
Down on Lenox Avenue the other nigh
By the pale dull pallor of an old gas light
He did a lazy sway . . .
He did a lazy sway . . .
To the tune o’ those Weary Blues.
With his ebony hands on each ivory key
He made that poor piano moan with melody.
O Blues!
Swaying to and fro on his rickety stool
He played that sad raggy tune like a musical fool.
Sweet Blues!
Coming from a black mans soul.
O Blues!
In a deep song voice with a melancholy tone
I heard that Negro sing, that old piano moan—
“Ain’t got nobody in all this world,
Ain’t got nobody but ma self.
I’s gwine to quit ma frownin’
And put ma troubles on the shelf.”

By the early 20’s it was officially the Jazz Age and the new music was influencing all of the arts.  Even poets not usually thought of a jazz poets—T. S. Eliot, Ezra Pound, and even, as unlikely as it seems, that guardian of Irish culture, W. B. Yeats were liberated and incorporating elements of syncopation and other jazz like riffs in their work.  Carl Sandburg and especially the highly experimental e. e. cummings, were writing about and in jazz forms.  The relationship continued and as jazz evolved—swing and big band, post-war be bop, West Coast cool—so did the poetry reflected by it.
No group of poets was more closely identified with jazz then the Beats.  Jack Kerouac was among the first to do readings to jazz, collaborating with his pal David Amram improvising on bongos and piano and perhaps created the stereotype of the beatnik coffee house scene.  Kenneth Rexroth was famous for his jazz readings and Lawrence Ferlinghetti collaborated with Stan Getz.  But many regard Bob Kaufman as the greatest of the Beat jazz poets.  The New Orleans born writer was the product of a German Jewish father and a mother from Martinique who practiced voodoo.  After teenage World War II service in the Merchant Marine he came to New York City where he fell in with William Burroughs and Allen Ginsberg.  In 1958 he migrated to the West Coast mecca of North Beach.  His jazz performances there became legendary.  He usually improvised and seldom wrote down any of his own work.  He was performance artists.  Of course, many of his most admired pieces have thus been lost.  But his wife hastily transcribed some as they were being performed and preserved part of their sheer energy.  After the assassination of John F. Kennedy he took a Buddhist vow of silence, which he kept for a number of years until he unleashed powerful new work protesting the Vietnam War.  He explained his own work, “My head is a bony guitar, strung with tongues, plucked by fingers & nails.”

O-Jazz-O War Memoir: Jazz, Don’t Listen To It At Your Own Risk

In the beginning, in the wet
Warm dark place,
Straining to break out, clawing at strange cables
Hearing her screams, laughing
“Later we forgave ourselves, we didn’t know”
Some secret jazz
Shouted, wait, don’t go.
Impatient, we came running, innocent
Laughing blobs of blood & faith.
To this mother, father world
Where laughter seems out of place
So we learned to cry, pleased
They pronounce human.
The secret Jazz blew a sigh
Some familiar sound shouted wait
Some are evil, some will hate.
“Just Jazz, blowing its top again”
So we rushed & laughed.
As we pushed & grabbed
While jazz blew in the night
Suddenly they were too busy to hear a simple sound
They were busy shoving mud in men’s mouths,
Who were busy dying on the living ground
Busy earning medals, for killing children on deserted street corners
Occupying their fathers, raping their mothers, busy humans we
Busy burning Japanese in atomicolorcinemascope
With stereophonic screams,
What one hundred per cent red blooded savage, would waste precious
time
Listening to jazz, with so many important things going on
But even the fittest murderers must rest
So they sat down in our blood soaked garments,
and listened to jazz
lost, steeped in all our death dreams
They were shocked at the sound of life, long gone from our own
They were indignant at the whistling, thinking, singing, beating,
swinging,
They wept for it, hugged, kissed it, loved it, joined it, we drank it,
Smoked it, ate with it, slept with it
They made our girls wear it for lovemaking
Instead of silly lace gowns,
Now in those terrible moments, when the dark memories come
The secret moments to which we admit no one
When guiltily we crawl back in time, reaching away from ourselves
They hear a familiar sound,
Jazz, scratching, digging, blueing, swinging jazz,
And listen,
And feel, & die,

—Bob Kaufman
LeRoi Jones rose to prominence as part of the Beat movement and quickly established himself as a unique voice, as a publisher, and as an influential essayist and critic who wrote extensively on Black music and Jazz.  He eventually rejected the mostly white Beats and threw himself into the Black Nationalist Movement and a Black Arts Movement which he founded.  He became a scathing critic of White appropriation of Black music and culture.  He established himself as Imamu Amiri Baraka and adopted Newark, New Jersey as his home base.  He became a leading national figure in the Black Nationalist Movement, but eventually left that behind to become a Marxist and anti-colonialist.  Always controversial and often angry, Amiri Baraka became the New Jersey Poet Lauriat only to have the position abolished after his post 9/11 poem Somebody Blew Up America? aroused indignation.  He died last year admired and reviled in equal measure.

WHYS (Nobody Knows
The Trouble I Seen)
Traditional

If you ever find
yourself, some where
lost and surrounded
by enemies
who won't let you
speak in your own language
who destroy your statues
& instruments, who ban
your omm bomm ba boom
then you are in trouble
deep trouble
they ban your
own boom ba boom
you in deep deep
trouble

probably take you several hundred years
to get
out!

Jayne Cortez married saxophonist Ornette Coleman when she was 18.  After divorcing him after several years of marriage in 1965 she became founder director of the Watts Repertory Theater Company.  Part of the Black Arts Movement, she established her own press and record label through which she released a series of readings to and about jazz.  She pushed boundaries working with the electric funk/fusion group the Firestarters and worked in Latin jazz and Afro/world music styles.  She died in 2012, the most influential woman spoken word performer of her generation.

—Jayne Cortez
We will wrap up with Gil Scott-Heron, the poet/musician whose jazz work and political riff poetry became the inspiration for modern hip hop and rap.

I Think I’ll Call It Morning

I’m gonna take myself a piece of sunshine
and paint it all over my sky.
Be no rain. Be no rain.
I'm gonna take the song from every bird
and make them sing it just for me.
Be no rain.
And I think I’ll call it morning from now on.
Why should I survive on sadness
convince myself I've got to be alone?
Why should I subscribe to this world’s madness
knowing that I’ve got to live on?