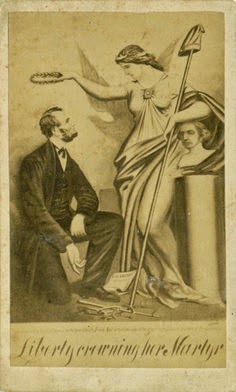 While this blog was observing Passover and the Blood Moon yesterday, I had to let the anniversary of Abraham Lincoln’s death slide by.  The horror of the Civil War was grinding to a halt.  There was euphoria in the North, despair among the defeated Rebels.  The assassination of the victorious President came as a thunderclap and evoked in the Union an unprecedented outpouring of grief and anguish.
Just the stuff of poetry.  Reams of the stuff were produced.  Elegies crowded the pages of newspapers, illustrated weeklies, and high flown literary journals alike.  Walt Whitman, of course, wrote the best remembered—three of them in fact including O, Captain! My Captain!—the recitation piece for generation of school children—and the evocative When Lilacs Last in the Dooryard Bloom’d.
Fascination with Lincoln did not fade.  In fact over time he would become ever more iconic.  And he continued to inspire poets into the 20th Century—including memorable poems by Edgar Lee Masters, Carl Sandburg, and Vachel Lindsey.
In 1901 Edwin Markham, who some will recognize as the author of the epigamic four line poem Outwitted from which this blog draws it title, released his second volume of verse, Lincoln and Other Poems.  It was a follow up to Man with the Hoe and Other Poems, the collection that vaulted the bearded former California school teacher and superintendent to sudden fame in late middle age. In it was Lincoln, the Man of the People later lauded by critic Henry Van Dyke of Princeton as “the greatest poem ever written on the immortal martyr, and the greatest that ever will be written.”
Although very different in style from his own work, it influenced young Sandburg, like Markham a Socialist and a Universalist, and contributed to his life-long fascination with Lincoln and his life.
When the Lincoln Memorial was dedicated in 1922 Robert Todd Lincoln himself tapped the elderly poet to read his famous poem.
And after all these years there are far worse ways to remember the Great Emancipator.

Lincoln, Man of the People

When the Norn Mother saw the Whirlwind Hour
Greatening and darkening as it hurried on,
She left the Heaven of Heroes and came down
To make a man to meet the mortal need.
She took the tried clay of the common road—
Clay warm yet with the genial heat of Earth,
Dashed through it all a strain of prophecy;
Tempered the heap with thrill of human tears;
Then mixed a laughter with the serious stuff.
Into the shape she breathed a flame to light
That tender, tragic, ever-changing face.
Here was a man to hold against the world,
A man to match the mountains and the sea.

The color of the ground was in him, the red earth;
The smack and tang of elemental things;
The rectitude and patience of the cliff;
The good-will of the rain that loves all leaves;
The friendly welcome of the wayside well;
The courage of the bird that dares the sea;
The gladness of the wind that shakes the corn;
The pity of the snow that hides all scars;
The secrecy of streams that make their way
Beneath the mountain to the rifted rock;
The tolerance and equity of light
That gives as freely to the shrinking flower
As to the great oak flaring to the wind—
To the grave’s low hill as to the Matterhorn
That shoulders out the sky. Sprung from the West,
He drank the valorous youth of a new world.
The strength of virgin forests braced his mind,
The hush of spacious prairies stilled his soul.
His words were oaks in acorns; and his thoughts
Were roots that firmly gripped the granite truth.

Up from log cabin to the Capitol,
One fire was on his spirit, one resolve—
To send the keen ax to the root of wrong,
Clearing a free way for the feet of God,
The eyes of conscience testing every stroke,
To make his deed the measure of a man.
He built the rail-pile as he built the State,
Pouring his splendid strength through every blow:
The grip that swung the ax in Illinois
Was on the pen that set a people free.

So came the Captain with the mighty heart;
And when the judgment thunders split the house,
Wrenching the rafters from their ancient rest,
He held the ridgepole up, and spiked again
The rafters of the Home.   He held his place—
Held the long purpose like a growing tree—
Held on through blame and faltered not at praise.
And when he fell in whirlwind, he went down
As when a lordly cedar, green with boughs,
Goes down with a great shout upon the hills,
And leaves a lonesome place against the sky.

—Edwin Markham
Posted by Patrick Murfin at 5:25 AM