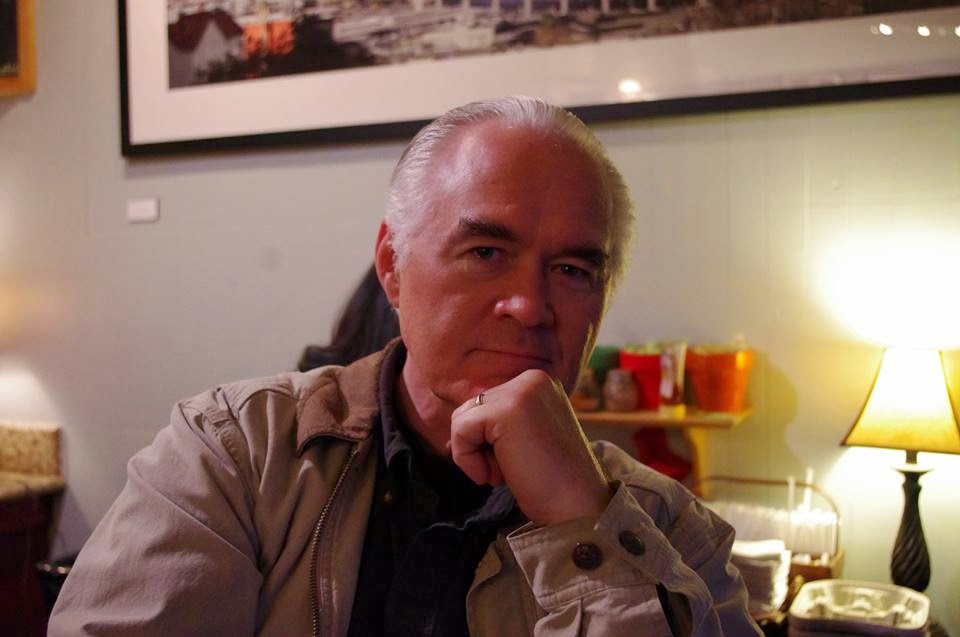 We’ve spent the last three days of National Poetry Month wading hip deep into the 19th Century and will be revisiting it soon as the calendar lures me.  Time to get modern, to enjoy a talented contemporary working poet.
I encountered Michael Graves at the The Renaissance Movement Facebook Page where artists and writers of all types share their work and give each other encouragement.  Graves is a regular contributor, cross posting from his own FB page.  I have been impressed by several of his poems.  He first caught my eye by being the only poet except myself who I had ever seen footnoting one his own poems.  That tickled my inner geek.
Graves is careful and particular about language.  He wants to be clear and understood, not obscure.  But he also wants his words to sing.
Graves and I seem to have a few things in common.  According to an interview in the blog Criminal Lines by Marguerite Ashton, he began dabbling in poetry in high school.  Predictably his juvenilia was earnest, angst filled, self-important and embarrassingly bad had he the wit to realize it.  Been there, done that.  In spades.
While studying at the University of Northern Colorado, which unless I miss my guess makes him a fellow Westerner, he had the good fortune to find an honest but supportive teacher/mentor, James Doyle, who was ruthless but on the money in critiquing his work and showing him the path to better, more mindful composition.  I was fortunate enough to have Paul Carroll at Columbia College in Chicago kick my ass gently but effectively.
Both of us largely gave up poetry after college, drifting into journalism, non-fiction, editing, and public relations.  Fortunately for Graves, he usually got paid for it, while my “career” as a writer was often after work and on week-ends, pounding the keys as a barely paid staffer at the old Chicago Seed, as a volunteer writer and editor for the Industrial Worker, and as pro bono flack for good causes and trouble makers from Chicago to McHenry County.  And now I have sunken to the pathetic ignominy of blogging.
We both returned to poetry in middle age, when life had taught us a few things, including generous dapple of humility, and had given us things that we HAD to say.  It was even an old friend of mine from long ago high school at Niles West in Skokie, Carol Tobias Eddington, a fine confessional and stream of consciousness poet in her own right, who Graves credits with giving him the push to begin versifying again.
Graves is as accomplished and versatile as any poet working today.  His interests are broad and so is his work.  He deserves attention.
I have enjoyed many of his pieces, but this one really sang to me.  Perhaps it was the topic—a favorite novelist in the cradle of his own best work—Monterey Bay’s Cannery Row.  It crackles with life and I feel I have been there.

Steinbeck’s Ghost
Steinbeck walks the
short, straight streets along
the weather-worn, wooden walls of cannery row,
swapping jokes with Ed Ricketts, each
out-shouting the bashing, booming waves. Laughing
like two men sharing the last drink
before the bottle breaks
into flying, sparkling splinters
on the rocks that edge the bay.

Back-slapping they wander,
planning the trip to British Columbia to
write “The Outer Shores.”
Ed, living for tidepool discoveries
on the gray, windy edge of
Monterey Bay.
John pinching Carol.
Pounding out
psalms of the displaced. Etching
the glass of humanity with
hard lines from a bindlestiff’s memory.
Cutting glass with an
Hermes Baby portable typewriter,
in the foggy, fecund air of
the Pajaro Valley. Cutting
his way into the consciousness
of America with
diamond-hard tales of the wandering underclass.

The wanderlust of the starving is less
lust than hunger and the need
to keep moving. For
to stop is to court the stillness
of death. To face the fatal fear of roots
that tie the wandering soul to earth and
frame the grave which awaits the stationary man.

Even now, he pounds
in the noisy stillness,
amid the roar of gray, autumn waves.
Cutting glass with an
Hermes Baby portable typewriter,
in the foggy, fecund air of
the Pajaro Valley.
Dead for forty years.

Copyright (c) 2012 by Michael Graves, All Rights Reserved, except the right to forward and to share with friends - with credit -- which is held to be a good idea and is thus encouraged.

More of Michael Graves’ poetry is at the following link:
https://www.facebook.com/pages/Michael-Graves-Poet/59117439868