A couple of days ago, I posted from Carl Sandburg’s Chicago Poems.  What Sandburg wrote nearly a hundred years ago now is still fresh and pertinent.  But he was mostly writing about a city of immigrants and the off-spring of immigrants, like himself, originally from Europe.  Since then Chicago has become an even more diverse city.  And those folk have found their own poetic expressions of their experience.
Take the city’s Latinos.  It is a mistake to regard them as one undifferentiated mass, as the media often assumes.  They are amazingly diverse from the old, well established Mexican communities in Pilsen, to the vibrant Puerto Rican areas on the West and North sides, and pockets of Central Americans, Columbians, Cubans, and about every other Latin nationality.  Each boasts a distinct culture, history, and cuisine.  And these communities are often as not at odds with one another, sometimes in fierce competition for jobs, political clout, and street turf.
Today let’s hear from two very different voices. 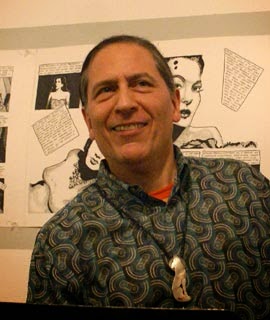 I first met Carlos  Cumpián in the early ‘70’s when I was staying with the late Carlos Cortez, the long-time editor of the Industrial Worker, painter, printmaker, poet, and raconteur.  Cortez and his wife Mariana lived in an old mid-block store font with a large apartment in the rear.  The large store was converted into a virtual gallery with walls covered in Cortez’s many prints and vivid paintings.  There was comfortable, if beat-up furniture, and large tables ready for entertaining or projects.  Into that inviting space came a parade of interesting people and admirers.  One of them was Cumpián, a thin, intense young man.
Like Cortez, who was born in Milwaukee to an Indio Mexicano IWW organizer father and a German socialist mother, Cumpián was a Chicano—an American born decedent of Mexican origin.  This was a distinct culture from even immigrant Mexicanos.  Cumpián was born in San Antonio, Texas and his father was college educated.
Together the two Carlos were the driving force behind MARCH (Movemento Artistico Chicano), the hugely influential incubator of Chicano and Mexican art of all kinds in Chicago.  Perhaps best known to the public for its contributions to reviving public muralism in the Pilsen neighborhood and the mentoring of a generation of fine and graphic artists, MARCH also encouraged the literary arts.
Cumpián was and is a fine poet with an original voice.  He became a mentor to many young writers and as the longtime editor of March Abrazo Press has given exposure to much Latino and Native American poetry.  While working as a teacher in Chicago Public Schools and as a writing instructor at Columbia College he has published several collections of his own work—including Coyote Sun (1990), Armadillo Charm (1996), and 14 Abriles (2010)—as well as editing notable anthologies.  The Chicago Public Library has listed him as among the top ten most requested poets.

What to wear, what to wear—
now let’s see what’s in the closet.
Bring down all the hangers,
pull off the scratchy labels,
Made or assembled in:
South Korea, Taiwan, Haiti,
Portugal, Philippines, Peru,
Macao, Mexico, Singapore,
Brazil, Bangladesh,
Ecuador—
boots from billion-dollar
debtor nations,
belts from military
dictatorships,
gloves (and baseballs) from
ungovernable tropics,
shirts from storehouses
of starvation wages,
coats from decomposing
Asian and African colonies,
pants from pauper
brown-lung ports,
socks from places where
it’s rare to own a pair
much less shoes—
hell, I think I’ll go
naked today.

Achy Obejas is a very different writer and an example of the wide diversity that often gets lumped together as Latino.  Like Cumpián, I feel a connection to her, although not so personal.  I first took note of her as a contributor to the local Logan Square community weekly newspaper.  I was active in the Logan Square Neighborhood Association in the early ‘80’s and her journalism was an important contribution to the community.  Later I would watch as her star rose as a writer for the Chicago Tribune and as a rising literary star.

Obejas was born in Cuba in 1956.  In ’63 her family became part of the mass exodus of anti-Castro dissidents and middle class families.  Unlike most exiles who settled in Miami and became a dominant force in the city, her family moved to the much smaller Chicago community which, despite living cheek-to-jowls with the much larger Puerto Rican community, often felt isolated.  Cubans were often mistrusted for their largely middle class origins and for the sometimes rabid anti-Communism.

Obejas honored and celebrated her Cuban heritage and culture.  On the other hand, she chaffed at the political expectations of her community as she became, as others in the second generation did, increasingly politically progressive.  She also had to deal with her sexual identity. She became an outspoken feminist and open lesbian incorporating all of these experiences into an increasingly rich body of work as a journalist, memoirist, and poet with an international reputation.

She has written three novels, Memory Mambo (1996), Days of Awe (2001),   Ruins (2009); the story collection We Came All the Way from Cuba So You Could Dress Like This?; and a poetry This is What Happened in Our Other Life.  All of this in addition to a prolific career as a journalist and magazine writer.

Posted by Patrick Murfin at 8:51 AM