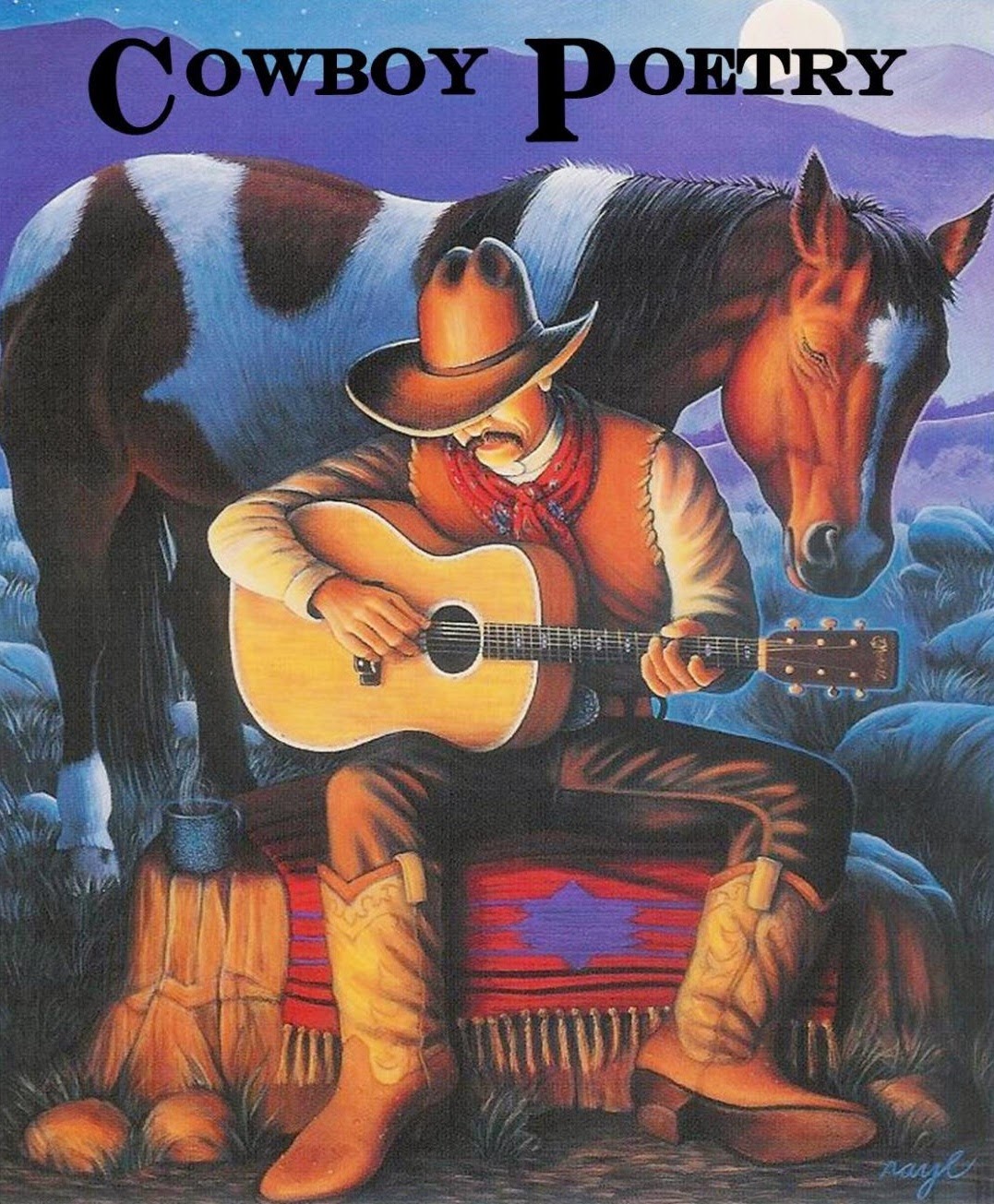 Cowboy poetry is a distinct genre with roots going back centuries—passing long, dark nights sharing yarns and yearnings in verse.  And it gets absolutely no respect from the poetry establishment which sneers at its strict conventions—heavily metered and rhymed, usually in couplets which makes it easy to memorize and gives it a sing-song quality.  In fact, it meshes easily with music and this kind of campfire verse often quickly makes the leap to song.  Just as did the lines of bards centuries ago.
The academics also are simply repelled by their preconceptions of the poets and their subject matter.  Drawing mostly not from the poetry itself but from the cowboy in popular culture—particularly movies and TV—often associated with macho posturing, sexism, violence, displacement and genocide of Native Americans, racism, jingoism, environmental exploitation, and animal abuse.
If cowboy poetry gets no respect from English departments and post-grad writing programs, at least it has drawn the interest and admiration of folklorists—and of some of the usually non-poetry reading public which simply finds it entertaining.
Western poetry’s most immediate ancestry is the hugely popular verse of the 19th Century including topical ballads, pastorals, dialect, and comic verse.  That included the popular easily recited ballads of Henry Wadsworth Longfellow; a trio of Hoosier poets whose work together spanned decades—John Greenleaf Whittier, John Hay (Lincoln’s secretary and Theodore Roosevelt’s Secretary of State who penned the dialect favorite Little Britches), and James Whitcomb Riley; and especially the Yukon poetry of Robert Service.
By the 1880’s and ‘90’ some campfire cowboy poetry was making its way into the columns of local newspapers and of popular national magazines, either submitted by the poets themselves, or collected by the increasing number tourists visiting the west.  Some eastern poets were inspired to write in imitation, some of whose work has entered the canon of cowboy poetry, if such a thing exists.
Purists, however, prefer the pieces of working cowhands, or at least those with a close familiarity with Western and ranch life.
Cowboy poetry continues to be written even as the work and the range have changed.  In fact it is more popular than ever.  Several Cowboy poetry festivals occur annually drawing crowds of devotees.  It is a medium that cries out to be heard recited, not read on the page.
Be that as it may, here is a short selection for you to read.  I suggest trying it out loud.
Bruce Kiskaddon was one of the most popular and revered of the traditional cowboy poets.  And he knew just what he was writing about.  He was born in 1878 in Pennsylvania but by the age of 20 he was a working hand in the Picket Wire district of Colorado, which is where he began making up his verses.  After service with the Cavalry in France during World War I, mostly as a mule skinner, he traveled to Australia where he worked as a jakaroo on outback cattle stations.  Back in the States he signed on with Tap Duncan, who owned and operated vast Diamond Bar spread in Mohave County Arizona.  Duncan encouraged Kiskaddon to share the poetry that made him a popular man around the chuck wagon.  His first collection of poetry was published in 1924.  More would follow in ‘28, ‘35, and ’47.  In 1936, like many working cowboys of the day, Kiskaddon made his way to Hollywood for work as a wrangler, stunt rider, and bit player in the oaters being churned out by studios major and minor.  But years in the saddle had taken their toll and he turned mostly to work as, of all things, a hotel bell hop.  He even turned that experience into verse.  He became a regular contributor of poetry and reminiscences in the Western Livestock Journal and from the mid-30’s to 1959 his poems were illustrated and featured in a hugely popular annual calendar issued by the Los Angeles Union Stock Yards. Kiskaddon died in 1950 but his legacy lived on in those annual calendars and he became a formative influence in the renaissance of cowboy poetry that started in the ‘60’s.
Startin’ Out
When the boys start out on circle, they most always travel slow.
‘Cause their breakfast isn't settled, and they’ve got a ways to go.
And perhaps a couple fellers is a little stiff and sore,
From the ridin’ and the brandin’ that they did the day before.

The hands do a little talkin’ but they watch the country ‘round.
And the hosses keep a walkin’ while the saddles settle down.
The old Boss he “Gives the powders,” as he lets ‘em ease along;
There won’t be no time for no talkin’ when they once get goin’ strong.

He keeps chawin’ his tobacker, and he spits and works his jaws,
While he talks about the water holes, the canons and the draws.
Purty soon they start a ridin’ and they throw the circle far.
Puffs of dust along the sky line show you where the riders are.

You might think there were no cattle in that country anywhere,
Till the circle starts to narrow and the dust hangs in the air.
By noon time the round up’s  gathered, and it makes you wonder how
Such a little bunch of riders ever found so many cows.

Not all cowboy poets are boys.  In fact one of the most revered is 92 year old Georgie Sicking.  She was born in 1921 on a ranch at Knight Creek in Yavapai County, Arizona.  She grew up doing ranch chores and eventually became a working cowgirl, doing all of the same roping, riding, and branding as any hand.  After losing her home in her teens when her folks divorced and dropping out of school she was disappointed to find that she would not be hired as a hand at near-by ranches.  “They didn’t hire mares” she said.  But she met and married Texas cowhand Frank H. Sicking and together they operated a series of hardscrabble spreads in Arizona, California, and Nevada before finally settling in a ranch at near Fallon in Churchill County, Nebraska.  There the couple happily raised three children and each shared range and home duties.  She was widowed at age 43 and thereafter ran a string of 50 or so pure bread Bahamas until she lost most of her sight.  She had been writing poetry since her teens, but turned more seriously to it in her imposed retirement.  She was soon a popular figure on the cowboy poetry circuit.  Sicking was inducted into the Cowgirl Hall of Fame in Fort Worth and was honored by the state of Nevada for have ridden a documented 100,000 miles on horseback in the course of her long life.  She currently lives along the Powder River in Johnson County, Wyoming and still rides her horse into Kaycee, the nearest town.

When I was young and foolish,
The women said to me,
“Take off those spurs and comb your hair
If a lady you will be.
“Forget about those cowboy ways
come and sit a while,
We will try to clue you in
On women's ways and whiles.
“Take off that Levi jumper
Put up those bat wing chaps.
Put on a little makeup and
We can get a date for you, ‘perhaps.’
“Forget about that roping.
That will make calluses on your hands.
And you know it takes soft fingers
If you want to catch a man!
“Do away with that Stetson hat
For is will crush your curls.
And even a homely cowboy wouldn't
Date a straight-haired girl!”
Now being young and foolish,
I went my merry way.
I guess I never wore a dress
Until my wedding day.
Now I tell my children,
No matter what you do,
stand up straight and tall,
Be you, and only you.
For if the Lord had meant us, all to be alike,
And the same rules to keep,
He would have bonded us all together,
Just like a band of sheep.

Some may find it surprising to find my dear old friend and fellow worker Utah Phillips in this company.  He is usually thought of as a singer and storyteller of railroading, hobos, and above all else of working people and the labor movement.  Bruce Phillips never cowboyed himself.  But he had an abiding interest in the history and heritage of the West and its people perhaps honed by his early career as an archivist for the Utah State Historical Museum.  Some of his earliest work grew out of that passion, including some cowboy poetry.  The Goodnight Loving Trail, one of his most popular early songs started out as a poem and was only set to music later.  Nor was his mixing of cowboy and hobo verse and music so unusual.  Many ranch hands were seasonal workers hired for the spring round up to gather the cattle which had scattered over the range in winter and brand new calves and the end of summer round ups and drives to take the herds to market.  In between those times, they were at loose ends and took whatever other work was available from dishwashing in town to joining the armies of harvest stiffs following the ripening wheat or construction gangs.  Many were too poor to own their own horses or even their own saddles and tack.  Like other itinerant workers, they hopped freights to get around.  Real life cowboy/hobos like Haywire Mac McClintock and Goebel Reeves went on to careers as musicians and entertainers singing about both experiences.  When Bruce hit the road as a working performer he fashioned a moniker after cowboy/western swing star T. Texas Tyler who was best known for his spoken word piece The Deck of Cards, and thus he became U. Utah Phillips, Golden Voice of the Great Southwest.

Too old to wrangle or ride on the swing,
You beat the triangle and you curse everything.
If dirt was a kingdom, they you'd be the king.

On the Goodnight Trail, on the Loving Trail,
Our Old Woman’s lonesome tonight.
Your French harp blows like the low bawling calf.
It’s a wonder the wind don’t tear off your skin.
Get in there and blow out the light.

With your snake oil and herbs and your liniments, too,
You can do anything that a doctor can do,
Except find a cure for your own god damned stew.

The campfire’s gone out and the coffee’s all gone,
The boys are all up and they’re raising the dawn.
You're still sitting there, lost in a song.

I know that some day I’ll be just the same,
Wearing an apron instead of a name.
There’s nothing can change it, there’s no one to blame.
For the desert’s a book writ in lizards and sage,
Easy to look like an old torn out page,
Faded and cracked with the colors of age.