Community activists and organizations including McHenry County National Organization for Women (NOW) and the McHenry County Democratic Women’s Club have responded to a nation-wide call for rapid response actions to call for the immediate release of the full, unedited Mueller Report despite the delay and obstruction of Attorney General William Barr. They have called for a No One is Above the Law rally and march on the Square in Woodstock, Thursday, April 4


The Cheeto-in-Charge has falsely claimed that the report exonerates the Trump campaign of collusion with Russia in meddling in the 2016 election and declared the Resident innocent of numerous instances of obstruction of justice. 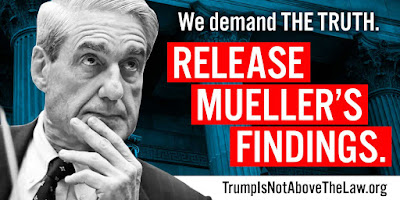 Nationally actions have been endorsed by Move On, Indivisible, Democracy for America, #March for Truth, People for the American Way, Pantsuit Nation, Progressive Democrats of America, Public Citizen, and the Women’s March among other organizations representing a wide spectrum of Democrats, progressives, resistance, and issue advocacy.


Congressional leaders have set a deadline: Trump-appointed Attorney General Bill Barr must make the Mueller report public by Tuesday, April 2 or the report will be subpoenaed by Congress. Barr has offered an alternate timeline for a redacted version of the report—but we deserve the full report and Congressional leaders and the American people expect it now. If he doesn’t #ReleaseTheReport  by midnight on Tuesday plan to gather to demand Barr #MakeItPublic with the immediate and full release of the report. Be prepared with your signs and marching shoes. Dress for the weather-this is outdoors. This event is being organized by peaceful grassroots activist groups in McHenry County. Text ALERT to 668366 to receive up to the minute alerts about the protest.


A major rally will be held in Chicago at 5 pm Thursday at the Federal Plaza and several other actions have been scheduled for the suburbs and metropolitan area including Crystal Lake at 5pm across from The Pointe near Target, meet on the sidewalk. To find an event near you visit.


For more information on the Woodstock rally visit the Facebook event.
Posted by Patrick Murfin at 12:19 PM