Now for Something Completely Different—Limericks!

We’ve been doing some heavy lifting the past few days in the annual National Poetry Month series—grim history, heavy current events, serious religion, and a doleful look at the planet’s futue.  Time to lighten things up! and what could be lighter than limericks.
Like Japanese haiku,  limericks are very short form poems with strict form.  Unlike haiku they are not ethereal, spiritual, or calming.  On the contrary they are bawdy—often lewd—disrespectful, rude, and sassy.  Even “clean” limericks for children are often rowdy, rebellious, and mischievous.
A limerick must consist of five lines. The first, second, and fifth lines must have seven to ten syllables while rhyming and having the same verbal rhythm. The third and fourth lines only have to have five to seven syllables, and have to rhyme with each other and have the same rhythm.  That’s an a-a-b-b-a rhyme scheme for those of you keeping score at home.
The form appeared in England in the early 18th Century and was  popularized by Edward Lear, an artist, illustrator, musician, author and poet, now known mostly for his literary nonsense  in the 19th Century.  As a form of folk verse its origins may be much older. Gershon Legman compiled the largest and most scholarly anthology, held that the true limerick as a folk form is always obscene to which literary heavy weights Arnold Bennett and George Bernard Shaw concurred. Lear described the clean limerick as a “periodic fad and object of magazine contests, rarely rising above mediocrity”.
The connection between the limerick and the Irish County of the same name are satisfactorily obscure but may derive from an earlier form of a nonsense verse parlor game that traditionally included a refrain that included “Will [or won’t] you come (up) to Limerick?”  But perhaps it was simply because a little Old Sod poteen, loosened the tongue and inhibitions for ribald play.
The most famous limerick of all was considered so obscene that it seldom saw print, although it was recited in many a bar room.


There was a young man from Nantucket
Whose dick was so long he could suck it.
He said with a grin
As he wiped off his chin,
“If my ear was a cunt I would fuck it.

Despite his opinion that limericks were generally obscene, the ones Edward Lear wrote and published in his 1875 Book of Nonsense did not offend Victorian morality.  But these two seem to include a sly double entendres.


There was an Old Man who said, “Hush!
I perceive a young bird in this bush!
When they said, “Is it small?”
He replied, “Not at all!
t is four times as big as the bush!”


There was a Young Lady of Dorking,
Who bought a large bonnet for walking;
But its colour and size,
So bedazzled her eyes,
That she very soon went back to Dorking. 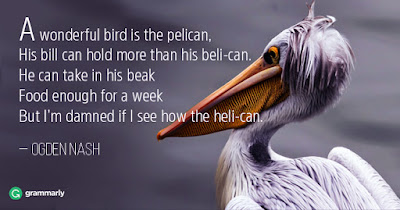 Here is a more modern example of the old fashion filthy absolutely guaranteed to offend.
The lass I brought home was a prize,
With an alluring set of bright eyes,
Her breasts, so well kept,
Were what I’d expect,
But her penis was quite a surprise!
Limericks are frequently used as political satire—usually scurrilous and—you should pardon the expression—below the belt employed by partisans of the Right and the Left with equal zest.
The President’s loud protestation
On his fall to his intern’s temptation:
“This affair is still moral
As long as it’s oral
Straight screwing I save for the nation.


A president famed for his spite*
Tweeted “I am outstandingly bright.
I’d be perfectly able
To muck out any stable
Because I am a genius at shite!


* Note: The limerick above won the fifth annual Bring your Limericks to Limerick contest, sponsored by the Limerick Writers’ Centre. We found the name of the winning limerick writer ironic, since Trump’s mother was a MacLeod from Scotland’s Outer Hebrides!


Dear Donald, when out on the stump
Please don’t lunge at our flag and then hump.
Such an act’s unbecoming
And vulgar — mind-numbing.
What’s your next flag-act? Taking a dump? 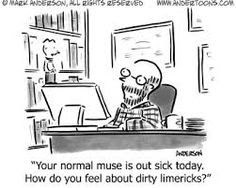 You get the idea.  Your efforts welcome in the [edited] comments.
Posted by Patrick Murfin at 3:05 PM