For Burnt Black Churches a Few Words from Cummings and Sandburg and a Little Cash. 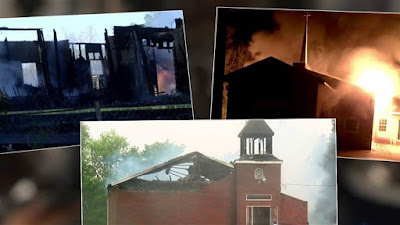 The tragic fire that burned the Cathedral of Notre Dame in Paris, not only aroused international donations to save that cultural icon, but it also shed light on the dire need of  Black Baptist churches in St. Landry Parish Louisiana—St. Mary Baptist in Port Barre and Greater Union Baptist Church and Mount Pleasant Baptist in Opelousas.  The fires were apparently set a White supremacist, the 20 year-old son of a local Sheriff’s Deputy.


In the wake of the Paris fire, Twitter appeals quickly raised more than $1.8 million dollars through the Seventh District Baptist Association’s  official Go Fund Me page.


Apparently it is possible to care about and hold in your heart more than one thing.  Weeping for one does not preclude sorrow over the other.  And that includes the fire at Jerusalem’s Al-Aqsa Mosque on the Temple Mount which blazed at the same time as Notre Dame.


I turn today for words from two of my favorite American poets.
e.e. cummings was the son of a Unitarian minister who was often at odds with his father over God and religion, especially after his experiences in World War I as a volunteer ambulance driver who was put in a French concentration camp on unfounded suspicion of being a spy.  A loss of faith common among those who survived the charnel house of Europe.  In the 1950’s he began to reflect on and embrace his father’s faith.  This is one of his most famous verses of that period and seems perfectly apt in light of by the Cathedral fire and the destruction of humble houses of worship.


i am a little church


i am a little church(no great cathedral)


far from the splendor and squalor of hurrying cities


-i do not worry if briefer days grow briefest,


i am not sorry when sun and rain make april


my life is the life of the reaper and the sower;


my prayers are prayers of earth's own clumsily striving


(finding and losing and laughing and crying)children


whose any sadness or joy is my grief or my gladness


around me surges a miracle of unceasing


birth and glory and death and resurrection:


over my sleeping self float flaming symbols


of hope, and i wake to a perfect patience of mountains


i am a little church(far from the frantic


world with its rapture and anguish)at peace with nature


-i do not worry if longer nights grow longest;


i am not sorry when silence becomes singing


winter by spring, i lift my diminutive spire to


merciful Him Whose only now is forever:


standing erect in the deathless truth of His presence


(welcoming humbly His light and proudly His darkness)


O you gods that sit and give


The world its orders.


Give me hunger, pain and want,


Shut me out with shame and failure


From your doors of gold and fame,


Give me your shabbiest, weariest hunger!


But leave me a little love,


A voice to speak to me in the day end,


A hand to touch me in the dark room


In the dusk of day-shapes


Thrust out from the changing shores of shadow.


Let me go to the window,


Watch there the day-shapes of dusk


And wait and know the coming


Of a little love.


—Carl Sandburg
Posted by Patrick Murfin at 10:45 AM