April 5-7 I attended the UUA Mid-America Regional Assembly in St. Louis.  My main missions were to represent the Tree of Life UU Congregation in McHenry, recharge my spiritual batteries with inspiring presentations, and facing the challenge of pervasive White privilege in myself, my religious home, and in our struggle for social justice.  Mission accomplished on all of those counts.


But I had a private mission as well—to scout the usual display by the UUA Bookstore InSpirit for new-to-me poets.  Alas, this year the Bookstore did not schlep its wares to Missouri.  But I did find what I was looking for on the well-stocked tables of the of UU Women and Religion with the UU Women’s Federation.


Nan Lundeen  may be best known for her widely admired handbook, Moo of Writing: which was a finalist in the 2017 Next Generation Indie Book Awards which was based on her article, Find Your Moos, appeared in a 2013 issue of the Britain’s  Writing Magazine, and her article, Relax and Renew with Moo/Mu of Writing appeared in The Paddock Review.


Lundeen’s poems have been published online by The Iowa Review’s Iowa Writes, and the University of South Carolina Poetry Initiative; she was a finalist in the Yemassee Literary Journal’s 2010 Pocataligo poetry contest.  The Catawba  was nominated for a Pushcart Prize  in 2014.  She has been widely published and admired in numerous literary journals.


Her poetry books include Gaia’s Cry, Black Dirt Days: Poems as Memoir, which was a finalist in the 2016 National Indie Excellence Awards, poetry and The Pantyhose Declarations, the slender volume I picked up at that UU conference


Her journalism has been published in the Detroit News, the Grand Rapids Press, the Connecticut Post, The Greenville News, and elsewhere.


Lundeen holds a master of arts in communications and a bachelor of arts in English from Western Michigan University at Kalamazoo. She is married to freelance photographer Ron DeKett. They live in rural southwestern Michigan among deer, wild turkey, hummingbirds, and wildflowers. 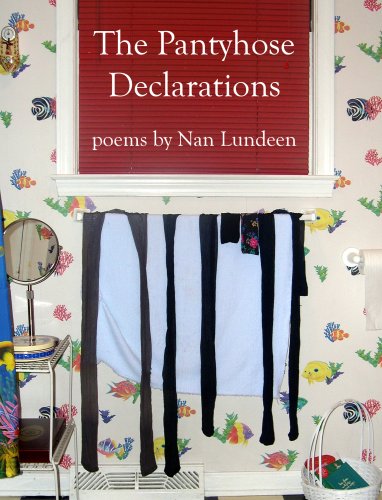 What is intriguing about Lundeen’s The Pantyhose Declarations is its organization into three sections.  Each one is a layer of the poet’s identity.  The first section “The Declarations” is her defiant but playful declarations of her feminism which is rooted in her refusal to be bound by either convention or expectation.


Do I Have to Wear Pantyhose?


They look down their noses and ask if I will


sit on the committee,


take a job with the corporation.


They ask if I will teach a class,


speak to the congregation,


accept the most officious task,


and sit on yet another committee.


They ask if I will host the symposium,


and sit on yet another committee.


They ask if I will witness the execution,


provide them with locution,


marry the candlestick maker in the finest of clothes,


and listen while many unburden their woes.


Oh give me your bare legged,


your grandmother in tennis shoes,


your gardener in old boots


give me panty hose.


That poem and the handful that follow it hint at Lundeen’s spiritual connection with Gaia having shaken off the Lutheranism of her youth and young adulthood which she expands on in the next section, “earth.”


If I Could Be


I would be outside


to grip trees, shrubs, or weeds,


and what kind of cactus turtles munch,


and how many rooms a chipmunk bores,


how a big, bumbling bear


how a spider lives beneath the sea


in her very own bubble home.


I’d discover all that


and wonder why a cricket chirps.


Does he chirp to cheer the hearth


or for some other reason?


But what are the roots of her feminism, her defiance, her connection to the earth around her?  The secret is revealed in the lives of grandmothers and aunts, of immigrants and Midwest prairie earth in “Goddeses.”


The wintergreen she rubbed into her knee


I still see her


at age eighty, picking up skirts


and wading through the creek


shy ferns hidden in the bluffs.


Or gathering the eggs


Scratching chicken dirt with her fingernail,


She argued with her children


insisted in molasses in the rye.


when she was eight


and Gram saw her


one night on the stairs.


In her rocking chair, stitching


That was Judith’s party dress


and that Aunt Clara’s apron,


we whispered late at night


I don’t trust that one.


Eyes too close together.


For more information on The Pantyhose Declarations © 2009 by Nan Lundeen and her other work visit NanLundeen.com .
Posted by Patrick Murfin at 6:03 AM

Email ThisBlogThis!Share to TwitterShare to FacebookShare to Pinterest
Labels: Earth, feminist, If I Could Be, Mathilda Lundeen, Michigan, Midwest, Moo of Writing, Nan Lundeen, National Poetry Month, The Pantyhose Declarations