high minded, serious folk— the worst high school English teachers, academics whose careers depend on culling ever diminish heard of obscure poets for publish-or-perish theses that no one reads, and critics convinced that only the obscure and arcane are worthy of notice and that popularity is vulgar.  Together these folks have just about beat to death any chance that the general public might consider reading and enjoying poetry.


Today we offer up a poet sure to set fire to these folks hair.


The Hoosier poet James Whitcomb Riley may not have been the greatest American poet.  But for a good many years he was the most popular—and the most beloved.  Many of his verses were written for, and loved, by children and there was a time when most could recite at least one of his poems by heart.


Riley was born on October 7, 1849 in the extremely rustic village of Greenfield, Indiana.  Although his father was a lawyer with political ambitions—the boy was named for a governor of the state—the family was still crowded into a two room log cabin.


What passed for a super highway, the planked National Road, ran by the cabin’s dooryard.  In those days with inns and taverns scarce, travelers on the road often pulled up at the cabin, the largest in the village, for supper or a place to sleep by the hearth or in the soft hay of the barn.  From the time he was a small boy, James listened to and absorbed the accents and the stories of the visitors and entertained his family and friends with imitations.

As the village and fortunes of the family grew, they replaced the cabin with a handsome two story white frame house.


James was an indifferent, make that horrible, student in the local one room academy.  His mind was always wandering to the meadows, woods, and creeks and the play of his friends.  He learned well enough to read and write, but seemed totally indifferent to anything else. One teacher told his exasperated father, “He doesn’t know which is more—twice ten or twice eternity.”  He dropped out of school to work odd jobs in town and on nearby farms.


His father convinced him to try reading law with him.  But that was a failure, too.


Despite his love of his town and his friends among the lively local youths, Riley had itchy feet and a hankering to see a bit more of the world.  He took up the tramp profession of traveling sign painter, roaming the Midwest.  Later, he became a barker in a traveling medicine show where he honed stage skills that would later help make him famous and where he cultivated a lifelong taste for the product, heavily laced with alcohol.


Riley didn’t write his first known poem until the age of 21 in 1870.  He sent it to a newspaper, which published it.  It became a habit.  The poems, usually in dialect, reflected his memories of the rural childhood.  Newspapers began, in the custom of the time, to reprint the poems “on exchange.”  He even started to get paid a dollar or two for a submission.


Despite this modest success, Riley suspected that as a rural bumpkin he would never be taken seriously as a poet by the Eastern literary establishment.  To prove his point, he perpetuated a hoax.  He submitted Leonanie an “undiscovered poem” by Edgar Allan Poe which was universally proclaimed as a masterpiece.  The Eastern critics failed to note that Poe himself was a famous hoaxer, having published at least six in his life, the most famous about a supposed 1844 crossing of the Atlantic by balloon.  When Riley revealed himself there were a lot of embarrassed—and angry—critics.  It is seems likely that tribe holds the grudge to this day.


He established himself enough as a writer to get a full time job on the Indianapolis Journal where he did reporting and regularly contributed verse, still a popular part of any American newspaper.


In 1883 he self-published an edition of 1000 copies of a collection, The Old Swimmin’ Hole and ‘Leven More Poems under the pen name of Benjamin F. Johnson, of Boone.  Most poets trying this gambit ended up with crates full of unsold books and ruinous debts to the printer.  Riley’s book sold out its first printing in only a few months.

That got the attention of local Indianapolis publisher Merrill, Meigs and Company which published a beautifully bound second edition under his real name.  It sold like hot cakes.  Riley would be associated with the company, which eventually became Bobbs-Merrill, for the rest of his life.  In fact that well known publishing house was largely built on the success of its Riley books.  The first of the original ones was The Boss Girl.


Riley was able to give up his day job, cater to his wanderlust, and promote his books when he took to the lecture platform.  With his charming wit, and theatrical style of reading he became one of the most sought after public speakers in the country, a genuine star of the Lyceum Circuit.  And everywhere he spoke, he sold even more books.


One of the few critics who appreciated him, fellow Midwesterner Hamlin Garland, noted that of American writers only Mark Twain  “who had the same amazing flow of quaint conceits.  He spoke ‘copy’ all the time.”  In an interview in 1892 in Greenfield, Riley told him, “My work did itself.  I’m only the willer bark through which the whistle comes.”


Twain, by the way, was not fond of Riley.  In their only appearance together on the same program, he felt that he was upstaged by someone plowing similar ground.  There after he avoided those literary dinners where Riley might make an appearance and occasionally derided his adversary.


Riley’s lectures and book sales made him the best paid writer America for a while, surely another bitter pill for struggling “serious” scribes.  It was said copies of his books were found in homes that contained no other save the Bible.


Riley never married.  He said a failed teenage romance back in Greenfield had made him decide not to commit his heart.  But serious alcoholism, that all too common malady of writers, was more likely the cause.  At least one lecture tour was aborted do to drunkenness.  Several attempts of stop drinking all ultimately failed.


In 1893 Riley began boarding at the home of his friends, Charles and Magdalena Holstein in the Indianapolis neighborhood of Lockerbie.  It was his home for the rest of his life and his friends took care of him through bouts of drinking and later severe health problems.


By 1895 he had largely stopped touring and his attempts to publish more “serious” poems were savaged even by critics who had warmed to his rustic style.  At home in Lockerbie he appointed himself an uncle to neighborhood children who flocked to hear his stories and tales.


That inspired his last, and ultimately most successful, original book, Rhymes of Childhood with illustrations by Howard Chandler Christy.  It was so popular through so many editions—it remains in print today—that Riley was proclaimed the Children’s Poet, much as Henry Wadsworth Longfellow had been years before.  Twain was so moved by this collection—and probably the memory of his dead children—that he finally had good things to say about Riley. 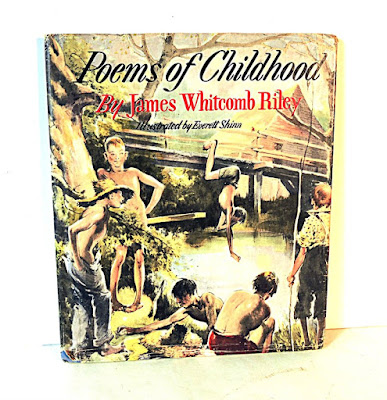 
Riley purchased the family homestead in Greenfield and his brother John lived in the house.  Riley would make occasional visits.


Riley’s health had been in steady decline since 1901.  He suffered a debilitating stroke in 1910 which confined him to a wheel chair.  The loss of the use of his writing hand bothered him and he later relied on dictation to George Ade for his last poems and biographical sketches.  By 1912 he had recovered enough to begin recording readings for Edison cylinders.  The same year the Governor of Indiana declared his birthday James Whitcomb Riley Day, a state holiday observed until 1968.


He made his last visit to Greenfield in 1916 for the funeral of a boyhood friend.  A week later back in Lockerbie, he suffered a second stroke and died on July 22nd.


Riley was widely mourned.  His books continued to be popular through the next two decades, finally falling out of favor.

His boyhood home in Greenfield is now a preserved historical site and his home in Lockerbie is the James Whitcomb Riley Museum Home and a designated National Historic Site.


Our hired girl, she’s ‘Lizabuth Ann;
An’ she can cook best things to eat!
She ist puts dough in our pie-pan,
An’ pours in somepin’ ‘at's good an’ sweet;
An’ nen she salts it all on top
With cinnamon; an’ nen she’ll stop
An’ stoop an' slide it, ist as slow,
In th’ old cook-stove, so's 'twon't slop
An’ git all spilled; nen bakes it, so
It's custard-pie, first thing you know!
An’ nen she’ll say,
“Clear out o’ my way! They’s time fer work, an’ time fer play!
Take yer dough, an’ run, child, run!
Er I cain’t git no cookin’ done!”


When our hired girl ‘tends like she’s mad,
An’ says folks got to walk the chalk
When she's around, er wisht they had!
I play out on our porch an' talk
To Th’ Raggedy Man ‘at mows our lawn;
An’ he says, “Whew!” an’ nen leans on
His old crook-scythe, and blinks his eyes,
An’ sniffs all ‘round an’ says, “I swawn!
Ef my old nose don’t tell me lies,
It ‘pears like I smell custard-pies!”
An’ nen he’ll say,
“Clear out o’ my way!
They’s time fer work, an’ time fer play!
Take yer dough, an’ run, child, run!
Er she cain’t git no cookin’ done!