To Be of Use by Marge Piercy

Six years ago I saw Marge Piercy at the toney, old money Standard Club in Chicago in a setting replete with dark wood paneling, plush furniture, and hushed club attendants at an event for alumni and the community of one of my alma maters—tiny Shimer College.  It was a wonderful evening in a slightly incongruous setting.


Tiny Piercy, almost lost behind a podium, was there not to read her poetry but to lecture from her 2005 Sex Wars: A Novel o the Gilded Age New York.  And she had a nifty slide show of rare photos of her leading characters—Elizabeth Caddy Stanton, Susan B. Anthony, Victoria Woodhull, anti-vice crusader Anthony Comstock and supporting players like Fredrick Douglas and mogul Cornelius Vanderbilt.  That won my heart.  I have the same passion for history and have blogged extensively about the period and those actors.


I snatched up a copy of the book and got my autograph.  The train ride back to Crystal Lake was rewarded by a deep dip into its richness.


Piercy was born in gritty Detroit in 1936 to a working class Jewish family struggling to stay afloat in Depression Era America.  She was a lackluster student, mostly due to mind numbingly rote learning in crowded classrooms, she did not blossom intellectually until a bout of rheumatic fever kept her bed  ridden for weeks during which time she had nothing to do but read.  Those books opened up a whole new world for her and gave her the determination to learn all she could about it and make the same magic herself.


She became the first member of her family to attend college when she won a Scholarship to the University of Michigan.  Her student writing attracted attention and honors.  In 1957 she won the Hopwood Award for Poetry and Fiction with cash that enabled her to finish college and spend some time in France.


She went on to graduate school at Northwestern University in the early ‘60’s where in addition to her writing, she became an activist with Students for a Democratic Society (SDS), Chicago area Civil Rights struggles, and particularly the growing Anti-Vietnam War  effort which further radicalized her.  She was among those who embraced the transition from more traditional Feminism to militant Women’s Liberation.  By the end of the decade she was also becoming involved dawning ecological movement.


As she grew as a writer Piercy touched on all of these issues in her dual career as a prolific poet and novelist.  Prolific just begins to describe her output, evenly divided by 17 volumes of poetry and 17 novels plus a memoir, essay collection, a play co-authored with her third husband Ira Wood, and So You Want to Write: How to Master the Craft of Writing Fiction and Memoir also with her husband.


She broke out as a poet in 1968 with her book Breaking Camp in which she defiantly declared, “I belong to nothing but my work carried like a prayer rug on my back.”  Her poetry remains intensely personal often focused on the deceptively routine of women’s lives.  It can be angry.  It can also be inspiring.  The Moon is Always Female published in 1989 is a revered classic of Feminist literature. 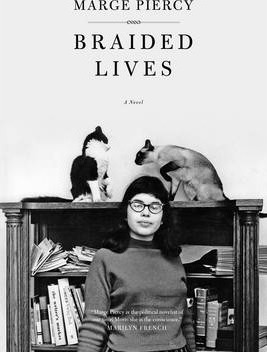 Her later work incorporated Jewish themes, the cycle of the Jewish year and its ritual observances, and the notion idea of tikkun olam, the repair of the world.  She has served as poetry editor for the radical Jewish Tikkun Magazine.


A she made her auspicious bow as a novelist with Going Down Fast, a tale of young radicals and artists in a city confronting the University that is gobbling up block after block of poor people’s homes—a subject with which she had first-hand experience.  The New York Times extolled her freshman effort, “Piercy burns anger and conviction.”


While her poetry is often autobiographical, her social concerns play out mostly in her novels.  She refuses to be bound by genre having worked in traditional science fiction, the more broadly speculative fiction of which she became a main proponent, as well as historical and contemporary settings.  Among her best known works are Woman on the Edge of Time considered a classic of utopian and feminist fiction as well as the foundational document of the Cyber Punk movement; her World War II novel Gone for Soldiers which tracks nine lives through the vast conflict; the dystopian sci-fi He, She and It (published under the title Body of Glass in Britain where it won the Arthur C. Clarke Award) and includes Jewish themes and the folk creature the Golem; and City of Darkness, City of Light set in Paris during the French Revolution.

Piercy’s personal life was intense and unstable.  After two failed marriages she married Ira Wood, a fellow writer with whom she has now had a long and fruitful personal and professional partnership.  Since 1971 she has lived in Wellfleet, Massachusetts on Cape Cod with Ira and her beloved cats.


In addition to a busy schedule of writing, including many essays, reviews, and magazine pieces, Piercy speaks and read widely.  She reads often at Unitarian Universalist Churches and has occasionally mistakenly been identified as a UU despite her Jewish identity.


Piercy has described the title poem from her collection To Be of Use as the best summary of her personal philosophy. 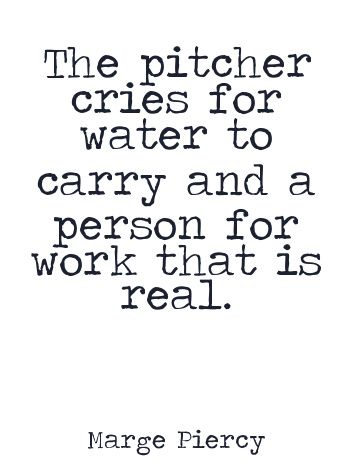 To Be of Use


The people I love the best
jump into work head first
without dallying in the shallows
and swim off with sure strokes almost out of sight.
They seem to become natives of that element,
the black sleek heads of seals
bouncing like half-submerged balls.

I love people who harness themselves, an ox to a heavy cart,
who pull like water buffalo, with massive patience,
who strain in the mud and the muck to move things forward,
who do what has to be done, again and again.

I want to be with people who submerge
in the task, who go into the fields to harvest
and work in a row and pass the bags along,
who are not parlor generals and field deserters
but move in a common rhythm
when the food must come in or the fire be put out.

The work of the world is common as mud.
Botched, it smears the hands, crumbles to dust.
But the thing worth doing well done
has a shape that satisfies, clean and evident.
Greek amphoras for wine or oil,
Hopi vases that held corn, are put in museums
but you know they were made to be used.
The pitcher cries for water to carry
and a person for work that is real.

Posted by Patrick Murfin at 4:54 AM