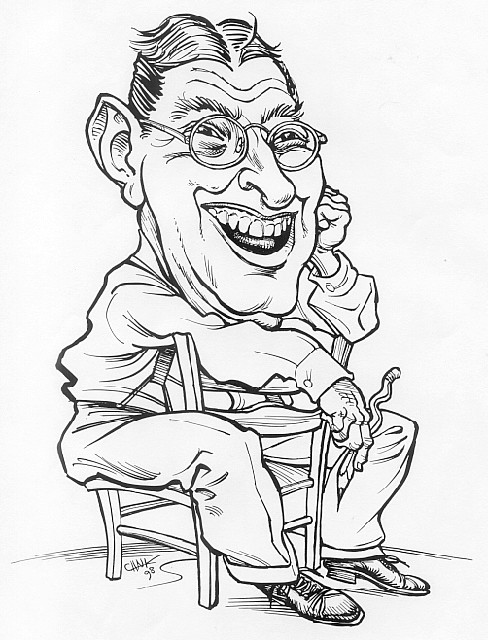 Writers are a lot like wildlife.  Some, like coyotes are widely adaptable and flourish in almost any environment.  They turn out novels, plays, poems, short stories, essays and straight reporting with equal ease dazzling observers with their versatility.  Others are like rare tropical tree frogs that can only exist in the shade of a particular tree that grows only on the south side of a single mountain.  These writers find a narrow niche, an unexplored genre, and dominate it.  Ogden Nash, born on August 19, 1902 in Rye, New York was one of the latter.

He mastered the art of light verse, rescuing it from frat boy doggerel, cutesy pie drivel, and angry if inept satire and transformed it into a kind of fine art all its own.  He dominated the field for a good chunk of the mid-20th Century.  And he even managed, occasionally, to stray from his niche to write screen plays and to collaborate on a successful Broadway show, One Touch of Venus.  But is for those fabulously funny short poems on which his lasting fame relies.


Nash was born into a comfortable, established family with deep roots in American history, a descendent of Brigadier General Francis Nash, a fallen Revolutionary War  hero form whom Nashville, Tennessee other places were named.  His father’s import/export business caused the family to move frequently but young Nash was sent to a first class boarding school St. George's in Middletown, Rhode Island, where he excelled as a student and felt comfortable.  He felt less comfortable at Harvard in 1920 and dropped out after his freshman year, scampering back to St. George’s to teach.

From there he drifted to New York City and a variety of jobs.  He tried his hand at advertising, composing copy for subway and streetcar card ads, a job previously held by F. Scott Fitzgerald.  Eventually he landed a job in the marketing department the publisher Doubleday and was promoted to reading submissions from the slush pile, the quality of which was so poor that he took to dashing off comic poems to relieve the tedium.


He began to submit the poems to the New Yorker where they rapidly became a favorite feature in 1930.  The following year he published his first collection, Hard Lines which became an astonishing success going through seven printings in its first year—unheard of for poetry of any kind.


He soon abandoned Doubleday and went to work for the New Yorker.  He also married the love of his life, Frances Rider Leonard.  Frances yearned for her native Baltimore and in 1934 the couple moved there to raise their two children and Nash concentrated full time on his verse.


He continued to appear in the New Yorker, but also regularly contributed to other top magazines including Harper's, The Saturday Evening Post, Life, and Vogue.  His prodigious output spawned several collection and his work was also respected by serious poets and often was anthologized alongside work by American contemporaries like e.e. cummings and William Carlos Williams.  Nash was also in demand to read on radio and later on television and toured college campuses and other venues.

In addition to light hearted non-sense, many of his poems from the Depression years featured a scornful anti-establishment satirical attitude and he was particularly scathing about conservative hypocrisy, and religious moralizers.  He was favorably compared to the top satirists of the day including Dorothy Parker, Robert Benchley, and H. L. Mencken.


Like many top writers, Nash was lured to Hollywood to try his hand at screen writing at MGM.  Between 1937 and 1940 he was credited as principle writer on three films:  The Firefly, an adaptation of an operetta by Rudolf Friml staring Jeanette MacDonald and Allan Jones; The Shining Hour, a romantic melodrama starring Joan Crawford, Margaret Sullivan, Robert Young, and Melvyn Douglas; and The Feminine Touch, a broad farce with Rosalind Russell, Don Ameche, Kay Francis, and Van Heflin.


In 1943 he teamed as lyricist with fellow humorist S.J. Perlman, the librettist, and composer Kurt Weill on the hit Broadway musical One Touch of Venus which featured the American standard Speak Low.  The play became a hit film in 1948 featuring a young Ava Gardner  as the goddess Venus come to life in her first starring role. In 1952 he returned to lyric writing for Bette Davis’s star crossed musical sketch review Two’s Company.  After that debacle, he retired from theatrical productions.


But he remained as busy as ever.  He was passionate about sports, particularly Baltimore sports.  Line-Up for Yesterday, an alphabetical poem listing baseball immortals was published in Sport magazine in 1949. Nearly two decades later Life commissioned poems to accompany photos of his beloved Baltimore Colts.


Also in 1949, Nash was commissioned to pen a set of humorous verses to accompany a Columbia Masterworks recording of Carnival of the Animals by Camille Saint-Saëns conducted by Andre Kostelanetz and read on the original album by Noel Coward.  They are now usually included when symphony orchestra’s perform this popular piece.

As he enjoyed time with his grandchildren in the ‘50’s he turned his attention to light hearted poems for children including The Boy Who Laughed at Santa Claus, Custard the Dragon, and Girls are Silly.  His playful use of language was compared to Dr. Seuss.

As his health deteriorated in the ‘60’s he ridiculed the medical establishment and lampooned his own deteriorating condition almost to the end.  Nash died of painful Crohn’s disease at Johns Hopkins Hospital in Baltimore on May 19, 1971.  Several collections and anthologies of his work have been published posthumously and he continues to be read and enjoyed.


A Flea and a Fly in the Flue


A flea and a fly in a flue
Were imprisoned, so what could they do?
Said the fly, “let us flee!”
“Let us fly!” said the flea.
So they flew through a flaw in the flue.


The grackle’s voice is less than mellow,
His heart is black, his eye is yellow,
He bullies more attractive birds
With hoodlum deeds and vulgar words,
And should a human interfere,
Attacks that human in the rear.
I cannot help but deem the grackle
An ornithological debacle.

Line Indicted With all of the Depravity of Poverty


One way to be very happy is to be very rich
For then you can buy orchids by the quire and bacon by the flitch.
And yet at the same time People don’t mind if you only tip them a dime,
Because it’s very funny
But somehow if you're rich enough you can get away with spending
water like money
While if you’re not rich you can spend in one evening your salary for
the year
And everybody will just stand around and jeer.
If you are rich you don’t have to think twice about buying a judge or a
horse,
Or a lower instead of an upper, or a new suit, or a divorce,
And you never have to say When,
And you can sleep every morning until nine or ten,
All of which
Explains why I should like very, very much to be very, very rich.


Praise the spells and bless the charms,


I found April in my arms.


Ever changing, ever true--


Let’s straighten this out, my little man,
And reach an agreement if we can.
I entered your door as an honored guest.
My shoes are shined and my trousers are pressed,
And I won’t stretch out and read you the funnies
And I won’t pretend that we’re Easter bunnies.
If you must get somebody down on the floor,
What in the hell are your parents for?
I do not like the things that you say
And I hate the games that you want to play.
No matter how frightfully hard you try,
We’ve little in common, you and I.
The interest I take in my neighbor's nursery
Would have to grow, to be even cursory,
And I would that performing sons and nephews
Were carted away with the daily refuse,
And I hold that frolicsome daughters and nieces
Are ample excuse for breaking leases.
You may take a sock at your daddy’s tummy
Or climb all over your doting mummy,
But keep your attentions to me in check,
Or, sonny boy, I will wring your neck.
A happier man today I’d be
Had someone wrung it ahead of me.

Posted by Patrick Murfin at 3:35 PM

Email ThisBlogThis!Share to TwitterShare to FacebookShare to Pinterest
Labels: 'television, A Flea and a Fly in the Flue, Always Marry an April Girl, Baltimore, Carnival of the Animals, humorist, light poetry, National Poetry Month, Ogden Nash, The Grackle, The New Yorker