Well, it’s the last day of National Poetry Month and our annual festival of verse is winding down.  Since tomorrow is May Day, I thought I would share one of my favorite IWW poems.


We Have Fed You All a Thousand Years first appeared as a poem in the pages of The Industrial Union Bulletin in 1908, only three years after the founding of the Industrial Workers of the World.  It was credited simply to “An Unknown Proletarian” and I know of no research that has identified the author.  It was popular from the start and was frequently reprinted and was included in early editions of Songs to Fan the Flames of Discontent better known as the IWW pocket sized Little Red Songbook.


Around 1912 it was set to music by Rudolph von Liebich identified only as a “member of the General Recruiting Union, Chicago, and Composer of Music for the Working Class.  Not much to go on there, either.


In addition to being printed in new editions of the Songbook, the song was issued as piano sheet music by the union.  Along with Joe Hill’s Rebel Girl and the IWW version of The International it remained in print in that form for more than 70 years. 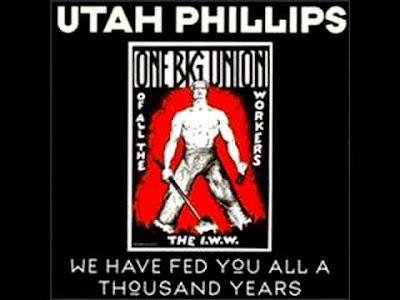 In the early 1970’s Utah Phillips recorded a version that has become a classic.
I love this poem because it lays out the heavy cost of the exploitation of labor better than anything I know.


We Have Fed You All a Thousand Years


We have fed you all, for a thousand years
And you hail us still unfed,
Though there's never a dollar of all your wealth
But marks the worker's dead.
We have yielded our best to give you rest
And you lie on crimson wool.
Then if blood be the price of all your wealth,
Good God! We have paid it in full.


There is never a mine blown skyward now
But we're buried alive for you.
There's never a wreck drifts shoreward now
But we are its ghastly crew.
Go reckon our dead by the forges red
And the factories where we spin.
If blood be the price of your cursed wealth
Good God! We have paid it in.


We have fed you all for a thousand years--
For that was our doom, you know,
From the days when you chained us in your fields
To the strike of a week ago.
You have taken our lives, and our babies and wives,
And we're told it's your legal share;
But if blood be the price of your lawful wealth
Good God! We have bought it fair.

Posted by Patrick Murfin at 4:10 AM