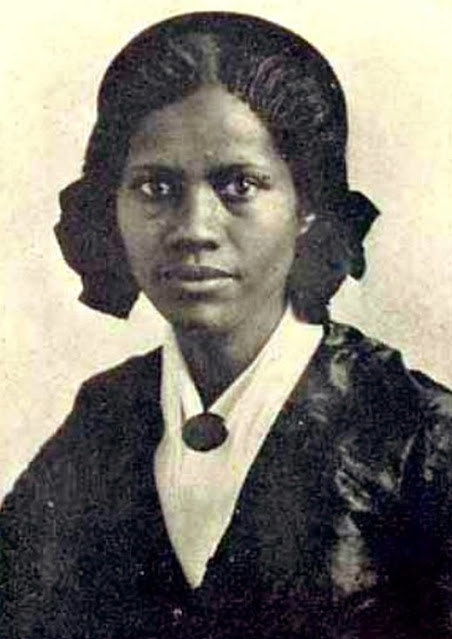 Those with the greatest stake in the outcome of the Civil War were those held in bondage.  While the protection, preservation, and extension of slavery clearly the main motivation for Southern secession, Northerners were divided on abolition.  As Abraham Lincoln understood in the early days of the conflict, he could only rally support for a war in defense of the Union.  Only as the war dragged on was he able to sell freeing the slaves in the rebellious states as a war measure to damage the Confederate economy.

Despite this, whenever Union armies approached, slaves left their plantations to cross the lines.  At first many were returned to their masters.  Later many were impressed into work gangs for the Army.  General Benjamin Butler declared them contraband of war, forfeited as property by masters in rebellion.  Later men were enlisted into segregated regiments and sent into battle.  Still, slavery was protected in the Border States, an inducement for them to remain loyal.  Finally, at war’s end slavery was abolished by Constitutional Amendment.

Most freed slaves were illiterate—teaching servants to read and write was, after all, a crime.  Few were able, or had the means to comment on their condition in printed poetry, although a rich oral tradition of songs and tales was passed down.  In the North and in pockets of the South, there was an educated elite of Free Blacks.  These folks had the education and opportunity to commit literature.

One such educated woman was Francis Ellen Watkins, born on September 24, 1825 of free parents in Baltimore, Maryland.  She was educated at the Academy for Negro Youth operated by her uncle and nurtured in the African Methodist Episcopal Church.  While working as a domestic for a Quaker family, she was given access to their extensive library and began writing poetry that was occasionally printed in local newspapers.  By 1845 she was able to publish a collection of verse, Autumn Leaves, later re-issued as Forest Leaves.   Another collection, Poems on Miscellaneous Subjects, published ten years later drew critical attention and praise. 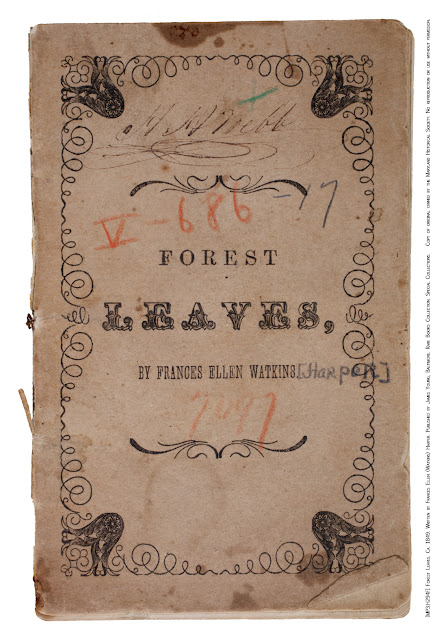 The second, expanded edition of her first collection.

After relocating first to Ohio and then to Pennsylvania, Watkins took to the lecture circuit in the 1850’s in support of abolition, women’s rights,  and temperance.

Like other Black writers of the time, before and during the Civil War Watkins was not writing for her own people, but for a largely white audience.  The purpose of her verse was to prove that people of color were capable of the same high and lofty sentiments as could be found in the pages of genteel magazines.  To this end, she adopted the formal and sentimental style of the age.

Later Black critics would dismiss her work on this account although after the War she contributed to the growing Black press as well as writing for White audiences.  In 1859 Watkins voiced her support for John Brown, personally comforted his wife before his execution, and even smuggled a letter to her hero in prison.  It read in part:

In the name of the young girl sold from the warm clasp of a mother’s arms to the clutches of a libertine or profligate,—in the name of the slave mother, her heart rocked to and fro by the agony of her mournful separations,—I thank you, that you have been brave enough to reach out your hands to the crushed and blighted of my race.

The First Unitarian Church of Philadelphia was Harper's religious home after the Civil War.

On the eve of the Civil War Watkins married Fenton Harper, a widower with three children and moved with him back to Ohio where she bore a daughter.  Her husband died in 1864 and she moved back to Philadelphia, which would remain her home the rest of her long life.  There she joined the local Unitarian Church, grateful for its support in the causes of abolition and equal rights for Blacks in the South. She kept up that membership, although she also remained close with her African Methodist Episcopal roots.

At war’s end she toured the South speaking to large crowds of Freedmen urging the necessity of education and the virtues of sobriety, marital fidelity, and faith.

Harper also became a noted advocate for Women’s Suffrage.  She campaigned in support of the Fourteenth Amendment, despite its failure to include women in its protections.  A prolific writer, she frequently contributed articles to Black journals as well as poetry and stories to the popular press.

Among her books was the story of Moses in verse, The Story of the Nile published in 1869.  She often returned to Moses in subsequent writing and helped popularize the metaphor of the Exodus story for the journey of Blacks to freedom.  In 1872 Sketches on Southern Life Harper recounted tales of Reconstruction through the eyes of an elderly woman. She also wrote popular romance novels with mixed race heroines. 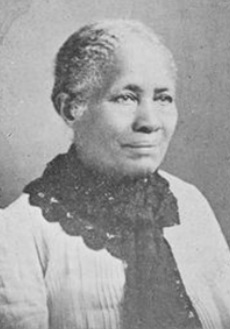 Harper as a mature writer, poet, and activist.

Harper became the Philadelphia and Pennsylvania Superintendent of the Colored Section of the Women’s Christian Temperance Union; (WCTU), helped found the National Association of Colored Women, and was active in the Universal Peace Union.  Late in life she collaborated with Ida B. Welles in her crusade against lynching.

Harper died in 1911, unable to see women get the vote.  Despite her contributions and accomplishments, her old fashion writing style led to her being largely forgotten.  Her gravestone in Philadelphia was long since toppled and unattended before admirers recently erected a new stone. 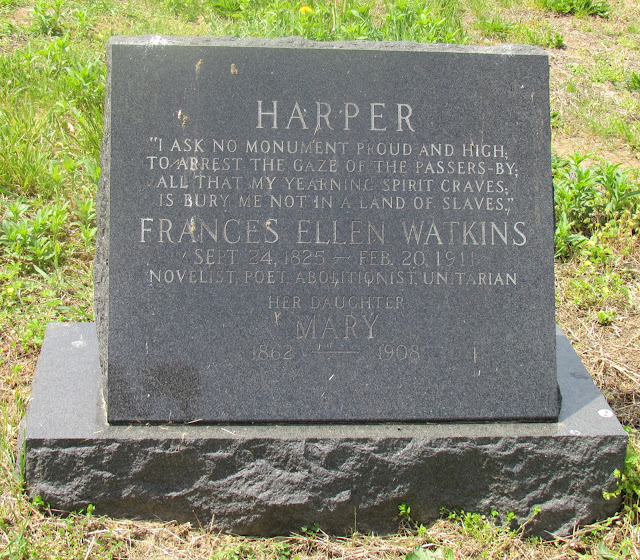 Harper's original gravestone was re-set and this marker placed by her grave by members of the First Unitarian Church of Philadelphia.

Bible Defense of Slavery, written on the eve of the Civil War, was typical of her work.  It was a scathing attack on the use of Christianity to justify slavery.

Take sackcloth of the darkest dye

And shroud the pulpits round!

Servants of Him that cannot lie,

Sit mourning on the ground.

Pale every brow with fears;

And rocks and stones, if ye could speak,

Let sorrow breathe in every tone,

In every strain ye raise;

With th’ mockery of praise.

A “reverend” man, whose light should be

The guide of age and youth,

Brings to the shrine of Slavery

The sacrifice of truth!

For the direst wrong by man imposed,

The word of life has been unclos’d,

To give your God the lie.

And plead for their dark shores,

Make heathens at your doors!

Posted by Patrick Murfin at 5:14 AM