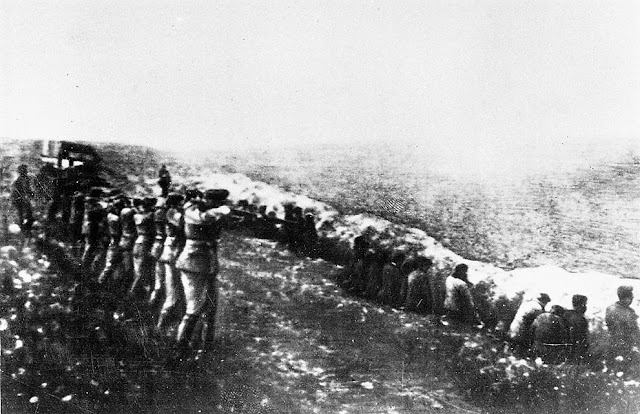 Note—This is an apt time to be reminded of the horror of anti-Semitism, racism, nationalist supremacism, fascism, and Nazism.  Don’t say it can’t happen here.  Be prepared to fight to prevent it.

Seventy-nine  years ago on September 29 and 30, 1941 most of the Jews of the Ukrainian capital of Kiev were transported to an isolated ravine named Babi Yar.  Over the course of those two days we know by the meticulous records kept by the Nazis that 33,771 men, women, and children were shot and killed.  It was the greatest mass execution of the Holocaust and as far as anyone has been able to determine the perhaps biggest single mass execution in all of history.

The Germans occupied Kiev on September 19.  Within days the Nazi military governor, Major General Kurt Eberhard decided to eradicate the Jews of Kiev in retribution to partisan attacks on German soldiers. On September 25 posters were put up in the Jewish quarter commanding Jews to report with their baggage, papers, and valuables for deportation on the 29th on pain of death.

S.S. commanders ordered to carry out the planned execution estimated that about 6000 would voluntarily show up and that they would have to conduct raids to secure the rest.  But almost the entire population obeyed the order. 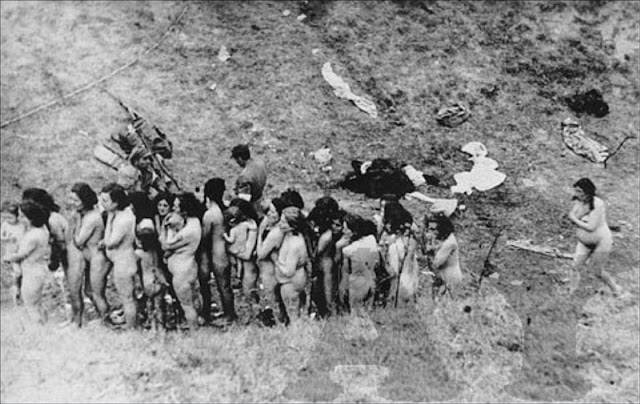 Naked women and children in the ravine at Babi Yar moments before they were shot.

The Jews assembled as ordered near the Jewish Cemetery.  They expected to be taken to rail yards for further transportation.  They were continually re-assured that everything would be fine. They were loaded in trucks and driven down a long corroder lined with German troops.  When unloaded they were told to strip all of their clothes.  One of the truck drivers described the scene:

…they had to remove their luggage, then their coats, shoes, and over garments and also underwear … Once undressed, they were led into the ravine which was about 150 meters long and 30 meters wide and a good 15 meters deep … When they reached the bottom of the ravine they were seized by members of the Schutzpolizei [battalions of ordinary German Police mobilized for service under the SS] and made to lie down on top of Jews who had already been shot … The corpses were literally in layers. A police marksman came along and shot each Jew in the neck with a submachine gun … I saw these marksmen stand on layers of corpses and shoot one after the other … The marksman would walk across the bodies of the executed Jews to the next Jew…

Units of Ukrainian collaborators also assisted the S.S. in maintaining order among the Jews as they were led to the slaughter.  Considering that the operation had to be conducted in such a primitive manor—as opposed the industrial gas chambers later in use—it was remarkably efficient.

The Babi Yar ravine continued to be an execution site as long as the Germans remained in the area.  Concentration camps were eventually constructed nearby.  Victims included not only more Jews rounded up from smaller cities and villages, but Romani (Gypsies), Soviet prisoners of war, occupants of mental hospitals, Communists, Ukrainian nationalists, and hostages of every sort.  Estimate run to 100,000 to 150,000 more executions in and around Babi Yar, most of them dumped in that seemingly bottomless ravine.

As Soviet forces closed in on the Germans in Kiev, they began systematically trying to destroy evidence of their crimes.  In August and September of 1943 about 300 chained prisoners from the nearby concentration camp were put to work exhuming bodies from the gorge.  The bodies were burned in makeshift crematoriums and the ashes scattered over surrounding farm land.  It is believed that up to 90% of the bodies were disposed of in this way.

The identities of most of the dead remain unknown.  Despite years of painstaking research Yad Vashem and other Jewish organizations has recorded the names of only around 3,000 Jews killed at those days Babi Yar and 10,000 killed in the area for the course of the war.

Following the war, S.S. commanders were sentenced to death and long prison sentences for their part in the killings. 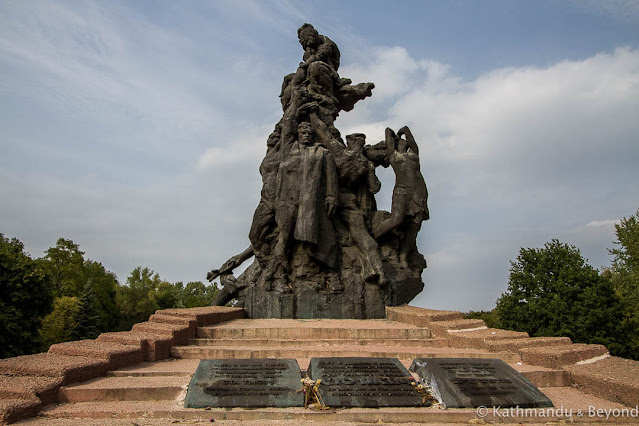 The Soviet era monument to the victims of Babi Yar failed to acknowlege tha Jews were the first and most frequent targets or the executions that continued in the area through most of the war.

Several monuments to various victims of Babi Yar have been erected there forming a kind of memorial park.  The largest, a monumental statue to all Soviet Citizens and POWs killed, presumably including by not specifically mentioning the Jews, was erected in 1971.  On the 50th anniversary of the killings a large Menorah was erected to commemorate all of the Jewish victims killed there during the war.  It was damaged by vandals in 2006.  There are two large wooden crosses, one for 621 Ukrainian nationalists shot in 1942 and another for two Orthodox priests executed for spreading anti-German propaganda.  By a subway station a memorial to the children of Babi Yar was installed in 2001.

As the horror story of the two days at Babi Yar got out, the mass murder gripped the attention of the public and of artists.  A censored version of the Russian/Ukrainian writer Anatoly Kuznetsov’s first hand memoirs, Babi Yar: A Document in the Form of a Novel was published in a Soviet literary magazine in 1956.  In 1971 Kuzetsov defected to Britain and brought out with him his original manuscript on microfilm.  It was published 1970 under the pseudonym A. Anololi.  Expurgated text was inserted in the original Russian version and highlighted in bold face.  The new edition became an international sensation. 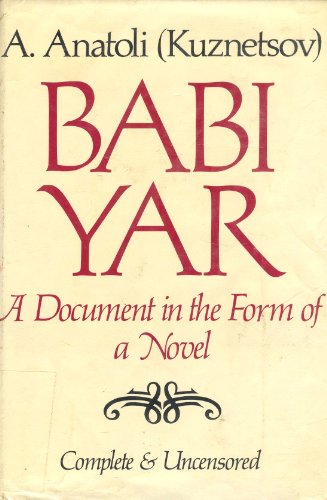 The unexpurgated of English edition of Anatoly Kuznetsov’s book brought the atrocity to the attention of the world in 1971.

The best known literary memorial is the one by Russian poet Yevgeny Yevtushenko.  In it he decried not only the original crime itself, but the Soviet policy of refusing to acknowledge that Jews were the special victims of the Nazis and its general encouragement of semi-official anti-Semitism.  Written in 1956, the poem circulated in the Soviet Union via underground samizdat—copies, usually carbon-paper typescripts, surreptitiously passed hand to hand.  Copies also found their way to the West where the poem was translated and reprinted to lavish praise.  It was not until the beginning of the glasnost era that the poem was officially published in the USSR.

Yevtushenko developed an international reputation as a dissenter based on this and a 1961 poem denouncing the continuing vestiges of Stalinism.  But dissident writers who were imprisoned in the Gulag have charged him with making many compromises with authorities pointing out that he continued to be a member of the Communist Party and was protected by top leaders.  He only criticized what was safe to criticize, his critics said.

None the less Yevtushenko’s poem Babi Yar remains a powerful expression.  Another Soviet era artist, composer Dmitri Shostakovich, set the poem to music in a movement of his choral Symphony #13 which premiered in Moscow in 1961 during a brief period of internal liberalization under Nikita Khrushchev. 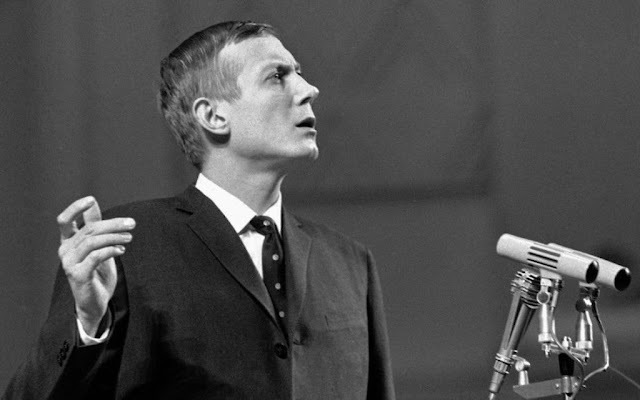 Soviet poet Yevgeny Yevtushenko was literary lion and loyal Communist Party member when he learned of Babi Yar and circulated his famous poem secretly in underground samizdat in 1956,  When it was later published in the West he was hailed as a hero dissident.

No monument stands over Babi Yar.
A steep cliff only, like the rudest headstone.
I am afraid.
Today, I am as old
As the entire Jewish race itself.

I see myself an ancient Israelite.
I wander o'er the roads of ancient Egypt
And here, upon the cross, I perish, tortured
And even now, I bear the marks of nails.

It seems to me that Dreyfus is myself.
The Philistines betrayed me - and now judge.
I'm in a cage. Surrounded and trapped,
I'm persecuted, spat on, slandered, and
The dainty dollies in their Brussels frills
Squeal, as they stab umbrellas at my face.

I see myself a boy in Belostok
Blood spills, and runs upon the floors,
The chiefs of bar and pub rage unimpeded
And reek of vodka and of onion, half and half.

I'm thrown back by a boot, I have no strength left,
In vain I beg the rabble of pogrom,
To jeers of “Kill the Jews, and save our Russia!”
My mother's being beaten by a clerk.

O, Russia of my heart, I know that you
Are international, by inner nature.
But often those whose hands are steeped in filth
Abused your purest name, in name of hatred.

I know the kindness of my native land.
How vile, that without the slightest quiver
The anti-Semites have proclaimed themselves
The “Union of the Russian People!”

It seems to me that I am Anna Frank,
Transparent, as the thinnest branch in April,
And I’m in love, and have no need of phrases,
But only that we gaze into each other's eyes.
How little one can see, or even sense!
Leaves are forbidden, so is sky,
But much is still allowed - very gently
In darkened rooms each other to embrace.

-“No, fear not - those are sounds
Of spring itself. She's coming soon.
Quickly, your lips!”

Wild grasses rustle over Babi Yar,
The trees look sternly, as if passing judgment.
Here, silently, all screams, and, hat in hand,
I feel my hair changing shade to gray.

And I myself, like one long soundless scream
Above the thousands of thousands interred,
I’m every old man executed here,
As I am every child murdered here.

No fiber of my body will forget this.
May Internationale thunder and ring
When, for all time, is buried and forgotten
The last of anti-Semites on this earth.

There is no Jewish blood that’s blood of mine,
But, hated with a passion that’s corrosive
Am I by anti-Semites like a Jew.
And that is why I call myself a Russian!

Posted by Patrick Murfin at 5:02 AM