Maxwell Perkins—Editor of a Galaxy of Literary Stars 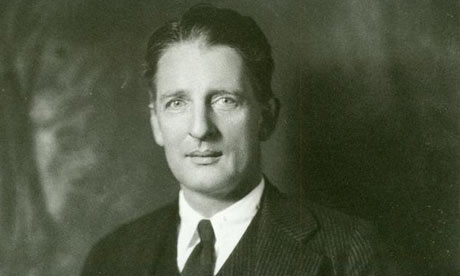 In American letters there have been figures who nurtured the writers who became the voices of their generations.  There was the Sage of Concord, Ralph Waldo Emerson himself and his circle of acolytes and admirers.  William Dean Howells presided at The Atlantic and hobnobbed with Mark Twain and fostered the realist novelists who lifted the genre from genteel diversions for ladies and epic adventure yarns to a mirror of American life.  Ezra Pound in London and Paris and Harriet Monroe in Chicago nurtured a brood of modern poets.  These folks were writers themselves who mentored and encouraged other writers, most often through periodicals that they edited or controlled.

But the man who revolutionized the American novel and made it the preeminent literary force of the first half of the 20th Century was not himself a writer.  He held a previously obscure position—manuscript editor for a publishing house—and transformed it into a discoverer of new talent and an active partner with authors in shaping their books for the public eye.  In the process he became the most famous editor of all time—Maxwell Perkins.

Perkins was born into the perfectly respectable WASP upper middle class on September 20, 1884, in New York City but was raised in the leafy bedroom suburb of Plainfield, New Jersey, a place of large homes and expansive lawns.  His parents could afford to send him to a prestigious prep school, St. Paul’s in Concord, New Hampshire and on to Harvard where he studied economics in preparation for an expected career in banking or a brokerage house.

But at Harvard Perkins fell under the sway of Charles Townsend Copeland, a famous teacher of literature who ignited a passion for reading.

Upon graduation Perkins worked briefly as a reporter on the New York Times perhaps dreaming that it might be a stepping stone for a career as a writer.  But it was not a good fit.  In 1910 at age 26 he joined the distinguished—and stuffy—publishing house of Charles Scribner’s Sons as an advertising manager.  Scribner’s was the home of genteel giants of American fiction—Edith Warton, Henry James, and John Galsworthy who chronicled the lives of the American elite.

It took Perkins four years to reach his goal—moving to the editorial department where he became a manuscript reader and junior editor.  It was here that his talents shone, particularly what came to be described as his exquisite taste and his eagerness to discover new talent that would break the bonds of convention.  That did not always make him popular with his superiors, but he shepherded enough good work to profitable publication that he could keep his job. 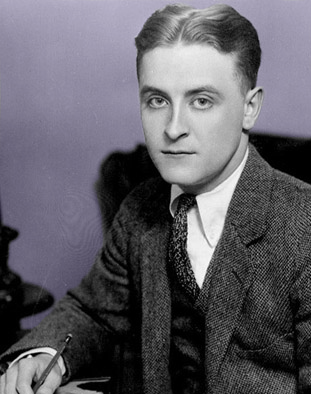 Perkins’s breakthrough came in 1919 when a manuscript landed on his desk that had been rejected with scathing comments by all of the company’s other readers.  The Romantic Egotist by a very young writer named F. Scott Fitzgerald was indeed rough.  But Perkins discerned talent.  For nearly two years he worked closely with the writer, guiding him through two complete revisions while continually advocating for the book with his bosses.

His approach would set a pattern.  He became not just a proof reader and style critic, but a friend and mentor to the young author, encouraging him, listening to his self-doubts, advising him on his tempestuous romance with a wealthy belle named Zelda, lending him money, and when necessary sobering him up.  Much later Roger Burlingame, a writer who came under his tutelage described Perkins’s unique approach, “He never tells you what to do.  Instead, he suggests to you, in an extraordinarily inarticulate fashion, what you want to do yourself.”

Despite all of his work, it looked like Scribner’s would finally reject the book.  At a last, desperate conference, Perkins appealed to the company’s sense of self-preservation, warning that if a talented writer like Fitzgerald was lost to them, he would find a publisher elsewhere, have a great success, and other promising young writers would follow him, “Then we might as well go out of business.”

Scribner’s held its own and published the re-titled This Side of Paradise was published in 1920 with the boast that the author was the youngest ever issued by the house. It became a best seller, a popular sensation, and the company’s biggest seller of the year.

Perkins continued to work with his wunderkind, bringing to publication the even bigger success of the Great Gatsby and then holding his hand through years of writer’s block, self-doubt, and heavy drinking, extracting from the wreckage what he could.  They remained personally and professionally close right up to the writer’s death. 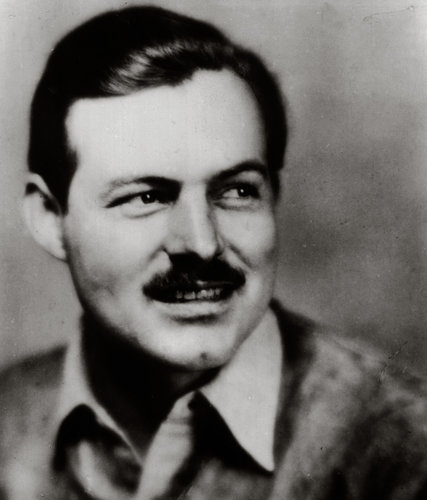 Fitzgerald helped Perkins find his next discovery, when he wrote from Paris in 1924 recommending his friend and drinking companion Ernest Hemingway. The short novel the expatriate writer sent to New York with its terse language and shocking themes, required less editorial tinkering than Fitzgerald’s but did take a lot of cajoling to get his bosses, who were shocked by the use of curse words and sexual tension, to get the company to release A Sun Also Rises.

Hemingway also became a close friend to his editor—and often had him attend to various business aspects of his sometimes messy life in addition to work on his manuscripts, even seeking his help in securing his house in Key West.  It was said that the first person Hemingway visited each time he was in New York was Maxwell Perkins.  After Perkins died his old friend dedicated The Old Man and the Sea to him—just one of 68 books dedicated to him by grateful authors.

Hemingway, Fitzgerald, and Perkins together remade the image of Scribner’s elevating it to undisputed first position among major American publishing houses.  And they were just getting started.

In 1927 Perkins came upon the greatest challenge of his career—the wildly talented and prolific Thomas Wolfe who presented him with thousands of typewritten manuscript pages.  Wolfe was everything Hemmingway was not—lush in his language, devoted to detailed and evocative description of scene and place, sprawling, undisciplined, and deeply emotionally attached to every sentence he wrote. 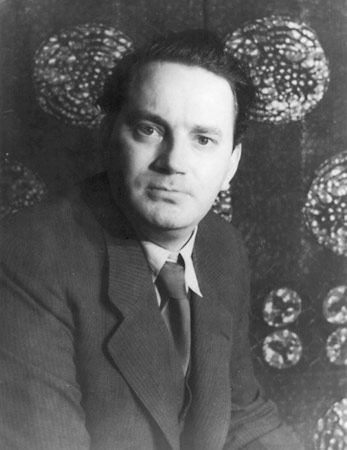 Together, with Wolfe fighting him every inch of the way, the two extracted a long memoir novel, Look Homeward Angel from the original submission.  The book was published in 1929 to huge popular and critical acclaim.  And there was more than enough material left over to seed a second novel.  As Perkins struggled to keep a limit on the new book, Wolfe kept sending him more and more new pages.  Eventually the editor prevailed and Of Time and the River was published in 1935.

By that time Perkins was a publishing legend and probably the only book editor who was a public figure in his own right.  The epic struggles of getting Wolfe’s latest book to publication had become the stuff of New York literary circle gossip and critics were beginning to give Perkins as much credit for the book as the author.  It was a bitter pill for any writer, particularly one as insecure as Wolfe.  He broke with Perkins and Scribner’s to prove that he could do without them.  Wolfe’s next two novels, The Web and the Rock and You Can’t Go Home Again were published posthumously.  They were fine work, but Perkins’s disciplined hand was obviously missing.

Despite the rupture of their professional relationship, Perkins and Wolfe remained personally close.  Wolfe, descending deeper into alcoholism, still considered his old editor his best friend.

Taken together those three literary giants have come to define Perkins in the public mind.  And they would be a sufficient career achievement for anyone.  But the editor discovered, nurtured, and refined the works of many others.  In fact the list is staggering.

Take Ring Lardner.  He was already a popular sports writer whose baseball yarns had a fallowing.  But previous collections of columns had failed and Lardner did not consider himself a serious or literary writer.  Perkins urged him to rework his stories and arranged them.  Then he came up with an intriguing title that virtually announced confidence, How to Write Short Stories.  The collection was published in 1924 and cemented Lardner’s reputation.

In 1938 Marjorie Kinnan Rawlings wrote the Pulitzer Prize winning The Yearling based on a story idea suggested by Perkins.  In the post war years he discovered the South African novelist Alan Paton and Cry the Beloved Country became an international sensation. 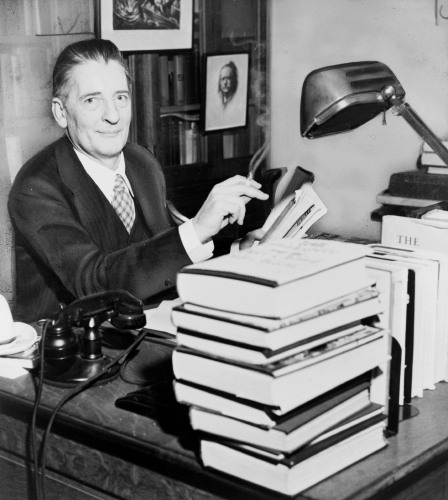 The mature legend at work at Scribner's.

In the late 40’s with his health failing, Perkins continued to turn up new talent.  He uncovered James Jones, one of the first important novelists of the World War II generation.  Rejecting his first submission, Perkins suggested the idea for From Here to Eternity based on his conversations with the author.  He worked on the early drafts of the manuscript but died before its publication and huge success.

The fruit of his final discovery did not ripen for nearly 20 years.  He signed Marguerite Young to a publishing contract in 1947 on the basis of a 40 page extract.  She did not finish her massive novel, Miss MacIntosh, My Darling until 1964 when it was published to huge critical acclaim.

Perkins died on June 17, 1947 in Stamford, Connecticut.  Scribner’s was never the same without him.

In 1978 Max Perkins: Editor of Genius by A. Scott Berg became a best seller and made Perkins, the publishing industry legend, something of a popular hero.  Other appreciations have been published since as well as several volumes of his correspondence including books dedicated to the letters to and from Fitzgerald and Hemingway. 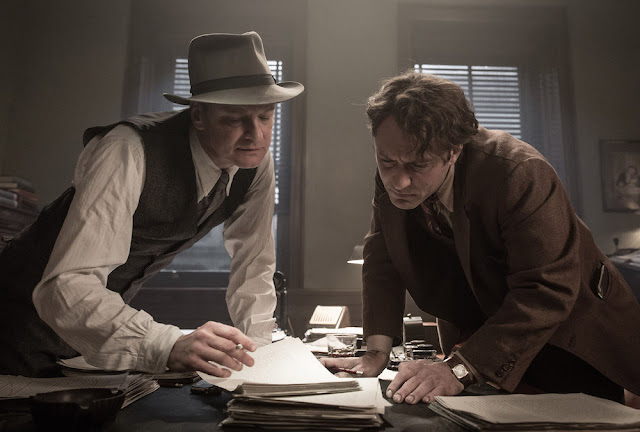 Colin Firth as Perkins and Jude Law as Wolfe in Genius.

In 2016 the film Genius focused on the relationship of Perkins and Wolfe with Colin Firth as the editor and Jude Law as the tortured writer.  It also featured Nichole Kidman as Wolfe’s lover Aline Bernstein and Laura Linley as Perkins’ wife.  Although well reviewed, the cerebral film sank in the multiplexes where superheroes and sci-fi epics dominated the screens.