Special U.N. envoy Ralph Bunche receives his Nobel Prize for brokering a peace between Israel and its neighboring Arab states.

On September 22, 1950 the world was surprised when an American diplomat on loan to the United Nations was awarded the Nobel Peace Prize.  It was not that his achievement was unworthy—brokering the thorny negotiations that led to an armistice agreements between Israel and the Arab States ending a bloody war that began when Israel declared its independence—it was because Ralph Bunche was an African-American.

Bunch was born in Detroit, Michigan on August 4, 1904 (some sources place the date a year earlier.)  His father was a barber serving an exclusively white clientele—and thus probably passing himself off as white in his work.  Some of his ancestors had been free since before the American Revolution.  His mother was an accomplished amateur musician.  Also in the house hold was his maternal grandmother, “Nana” Johnson who had been born into slavery but was also capable of “passing.”  Despite their fair completions the family strongly identified as Black and lived in that community.

Both parents were in fragile health and the whole family relocated to Albuquerque, New Mexico in hopes of improvement.  Both however soon succumbed—probably to tuberculosis.  Bunche, his two sisters, and his grandmother moved to Los Angeles. 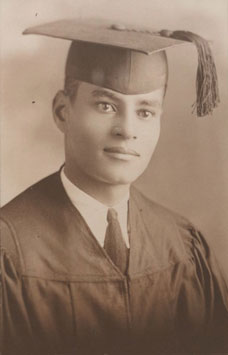 Bunche as a UCLA graduate.

To help support the family Ralph sold newspapers and held numerous side jobs, including laying carpets, and being a house boy to a film actor while he attended Jefferson High School.  Despite the time lost to work, he excelled as both a student and an athlete.  He was valedictorian of his graduating class, and earned athletic scholarships to the University of California at Los Angeles (UCLA.) While the scholarships paid his school expenses, he earned his personal expenses by working as a janitor.  He competed as a varsity basketball player on league championship teams while also competing in debate and writing for the campus newspaper.  In 1927 Bunche graduated summa cum laude and valedictorian with a major in international relations.

His accomplishment was a matter of great pride in his South Los Angeles neighborhood.  The community raised $1000 by subscription to supplement a scholarship so that Bunche could continue his education at Harvard.  He completed his Masters in political science in just a year.  He began teaching at Howard University, the nation’s most prestigious Black institution in the fall of 1928.  For the next six years he alternated terms at Howard and back at Harvard where he pursued his Doctorate.  He was named Chair of Howard’s Department of Political Science, a title he held until 1950 despite numerous absences to conduct research or in war time or diplomatic service.

He received many honors and distinctions as a scholar.  The Rosenwald Fellowship in 1932 and 1933 enabled him to conduct research in Africa for a dissertation comparing French rule in Togoland and Dahomey.  The resulting paper won the Toppan Prize for outstanding original research in the social sciences in 1934.  A fellowship from the Social Science Research Council from 1936-37 enabled Bunche to do postdoctoral research at Northwestern University, the London School of Economics, and the University of Cape Town in South Africa. Bunche as a young Scholar.

As he was becoming the acknowledged leading academic on African affairs and European Colonialism, he began to forcefully expound his sometimes controversial views.  His influential 1936 pamphlet A World View of Race argued, “…class will some day supplant race in world affairs. Race war will then be merely a side-show to the gigantic class war which will be waged in the big tent we call the world.”  From 1936-40 Bunche was contributing editor to a leftist academic journal, Science and Society: A Marxian Quarterly.

It was inevitable that with his credentials and expertise Bunche would be called upon for service during World War II.  He began as a senior analyst on colonial affairs at the Office of Strategic Services (OSS.)  There his knowledge of French possessions helped provide information that kept most of the sub-Saharan colonies in Free French hands and available as support for eventual action in North Africa.  He also provided insight on Nazi attempts to turn South African Boers against the British Empire.

In 1943 Bunche moved to the State Department where he served under Alger Hiss as Associate Chief of the Division of Dependent Area Affairs.  There he worked not only on African issues but as a leader of the Institute of Pacific Relations, and the Anglo-American Caribbean Commission.

Bunche was active in preliminary planning for the Dumbarton Oaks Conversations held in Washington D.C. in 1944 and as an adviser to the U.S. Delegation for the Charter Conference of the United Nations in 1945. He participated in the drafting of the Charter.  He worked closely with Eleanor Roosevelt in the creation and adoption of the U.N. Declaration of Human Rights.

Given his role in the birth of the institution, it came as no surprise when UN Secretary-General Trygve Lie asked to “borrow” Bunche from the State Department in 1946.  He was placed in charge of the Department of Trusteeship to oversee the numerous dependent areas that were placed under UN Trusteeship following the war.  It was delicate work, balancing the demands of former colonial masters and the growing anti-colonial nationalism of countries straining at the “transition” process to self-government. 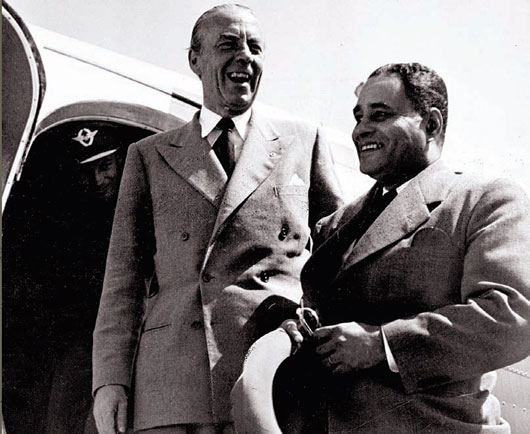 Bunche was Count Folke Bernadotte's top aid as UN mediator until the Swede was assassinator in  Jerusalem and inherited the job.

In June, 1947 Bunche was assigned to work on the seemingly intractable problem of confrontation between Jews and Arabs in Palestine.  He soon moved from assistant to the UN Special Committee on Palestine to Principal Secretary of the UN Palestine Commission, which was charged with carrying out the partition approved by the UN General Assembly. When the original partition plan was dropped amid intense fighting between Arabs and Israelis in early 1948 the UN appointed Swedish Count Folke Bernadotte as mediator for the conflict with Bunche as his chief aide. Count Bernadotte was assassinated in Jerusalem four months later on September 17 by the Zionist group Lehi. And Bunche was catapulted to chief mediator on Palestine. It was, theoretically a “temporary” appointment.

For eleven months Bunche conducted ceaseless negotiation from his headquarters on the island of Rhodes.   Israeli negotiator Moshe Dayan later reported on Bunche’s unorthodox style.  He often conducted one-on-one talks with the parties over supposedly casual games of billiards.  He generally kept the parties apart as much as possible since their mere presence with each other in the same room inflamed passions and tended to harden positions.  He shuffled the parties in an out getting little concessions here and there from both parties until he could finally bring them together to sign the 1949 Armistice Agreements  made successively between February and July between Israel and its neighbors, Egypt, Lebanon, Jordon, and Syria.  No party got what they really wanted, but all parties got what they could live with—at least for a while.

His accomplishments made Bunche an instant celebrity.  He was greeted in New York City by a ticker tape parade and his adopted home town of Los Angeles declared a Ralph Bunche Day. He was awarded the Spingarn Prize by the National Association of Colored People (NAACP) in 1949.  He was awarded 30 honorary degrees over the next three years.  He could not keep up with requests for speeches.  And all of this only intensified with the announcement of the Nobel Prize.

Of course, Bunche was not without critics.  His participation in the avowedly Marxist academic publication, his endorsement of National Negro Congress in the ‘30’s, and his close association with accused traitor Alger Hiss did not go unnoticed.  He was somewhat protected by the enormous prestige of the Nobel Prize—and the fact that he was no longer at the State Department. But he was subjected to an investigation by a Loyalty Board into American diplomats working at the United Nations in 1953 and had to personally appear and refute each of 14 spurious charges against him.  Although he had the support of President Dwight Eisenhower, it was a painful and humiliating experience for him. 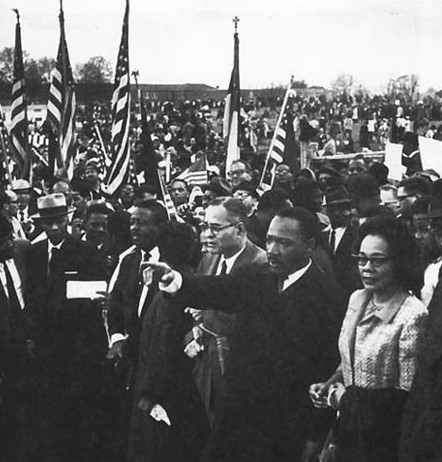 Bunche with Ralph Abernathy, Dr. Martin Luther King, Jr., and Coretta Scott King on the March from Selma to Montgomery.

Many also did not appreciate his loud public support for Civil Rights causes.  Academically, he had participated in the groundbreaking research on American race relations by Swedish sociologist Gunnar Myrdal and often spoken out about the absence of scientific evidence for differentiations among the races.  He publicly supported actions by both the NAACP and the Urban League.  He endorsed the campaigns of non-violent civil disobedience of Dr. Martin Luther King, Jr. and participated in the 1963 March on Washington.  Controversy around him probably cost him appointment as Secretary of State or Ambassador to the United Nations under John F. Kennedy.

The beneficiaries of his greatest achievement have not looked kindly towards him in recent years.  Palestinians and Israelis have hardened even more toward one another after years of ongoing conflict and bloodshed.  Both wield their own oft revised views of history as cudgels.  And both sides now feel that Bunche “sold them out” and blame the ongoing conflict in not getting everything they demanded in those tense negotiations.  Compromise and compromisers are no longer welcome in either camp.

For his part, the indefatigable Bunche resumed splitting his time numerous educational commitments, lecturing, and undertaking more missions for the United Nations.  From 1955 to 1967, he was Undersecretary for Special Political Affairs and from 1968 to his death was Undersecretary-General.  In 1960 Secretary-General Dag Hammarskjöld appointed him as his special representative to oversee the UN commitments in the war torn Congo and he served similarly during conflicts in Cyprus, Kashmir, and Yemen. 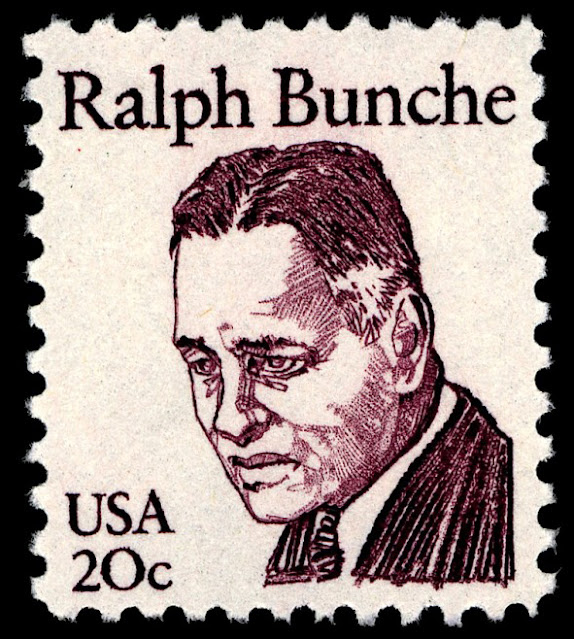 Bunche found time to teach at Harvard from 1950-52, serve on the New York City Board of Education from 1958-64, serve as a member of the Harvard Board of Overseers from 1960 to 65, as well as being a board member of the Institute of International Education, and a trustee of Oberlin College, Lincoln University, and New Lincoln School.