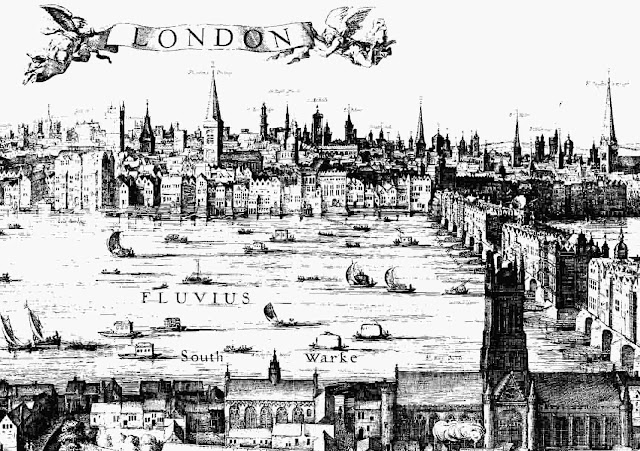 On September 29, 1650 Henry Robinson, a noted religious dissenter, philosopher, writer, merchant, and sometimes government official, opened the Office of Addresses and Encounters, a brand new and unusual business on Threadneedle Street in London.

At the office, for a modest fee of sixpence individuals and businesses could record their addresses, what services they could offer, and list what needs they might have.  The poor could use the service without charge.  Employers could offer jobs, and seekers find them.  Real estate including country houses was offered but lodgers could also find accommodations.   Hard to find merchandise was matched with buyers.  It is said that occasionally the lovelorn sought companionship or prostitutes discretely offered their comfort, leading some later historians to conclude that it was some sort of dating service.

Leave it to humans to make every sort of information exchange about sex.

Most commonly it functioned as what the Brits call a labour exchange or on this side of the puddle call an employment service—the first in England.

In Paris Théophraste Renaudot, a physician, philanthropist, and journalist had operated the bureau d’adresse et de rencontre since 1630.

Robinson got the idea from his good friend German born Samuel Hartlib, another one of those geniuses-at-large.  Today we might call both men public intellectuals.  Hartlib had a grander vision for adapting Renaudot’s idea to England.  He wanted a much larger undertaking sponsored by the government as a central repository for all useful information.  In addition to the exchange, he wanted a staff of the leading experts on every topic to be available to answer any question a member of the public might have—a kind of living encyclopedia or Google.

Not surprisingly no one at any level of government was interested in such a grand and expensive project.  After the idea had been kicking around for a few years, Robinson decided to go ahead with the more modest core of the idea as a private enterprise.  The project did not last long during the turbulent years of the Commonwealth which directed energies elsewhere.  But it was long remembered and has been cited as the inspiration for various public information projects on both sides of the Atlantic. 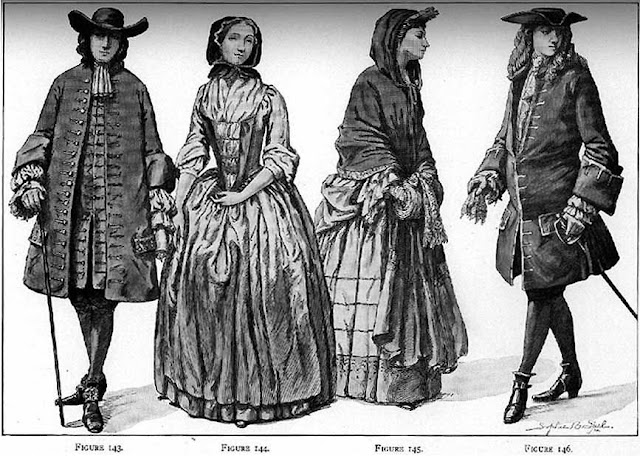 Merchant class and gentle folk like these would have been the primary users of the Office of Addresses and Encounters, but mechanics and other laborers seeking employment could register at no charge as well.

Robinson as a bright young man was educated at St. John’s College, Oxford and was admitted to membership in the Worshipful Company of Mercers, the premier Livery Company of the City of London, a kind of privileged trade association of general merchants especially exporters of wool and importers of velvet, silk and other luxurious fabrics.  That made him a wealthy man.

Wide travel, especially to Holland which nurtured religious dissent, a spirit of tolerance, and unencumbered commercial business, made him a vocal advocate for all sorts of change in England.  He began to write widely on economic matters—trade policy, interest rates, naturalization of foreigners, redistribution of trades from London center, and inland navigation.  When Parliament and Cromwell came to power ideas that he advanced in his pamphlets influenced policy.

In recognition Robinson was appointed to administrative positions, dealing with accounts and sale of former Crown lands, with farm rents, and acting as secretary to the excise commissioners.

But Robinson is best remembered as a strong advocate of religious toleration.  He believed that “no man can have a natural monopoly of truth.”  Of course, he meant toleration within a range of Protestant beliefs—Catholics and Jews need not apply.  He later fell out of favor with the Puritans for opposing the establishment of a new National Church based on Presbyterianism for fear that it would lead to religious persecution of dissenters. 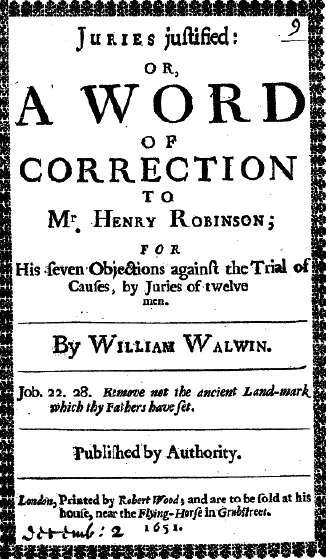 Henry Robinson was a prolific writer and commentator and not stranger to controversy.  This pamphlet published the year after he established the Office of Addresses and Encounters scolded him for his defense of the Levelers.


Robinson was also a pioneer writer against censorship anticipating and informing the views of John Milton.

Robinson died at the age of 64 in 1664 after the Restoration had destroyed his public influence and put his personal safety at risk.

Posted by Patrick Murfin at 7:26 AM