A Writer’s Tool Bag Before the Internet… 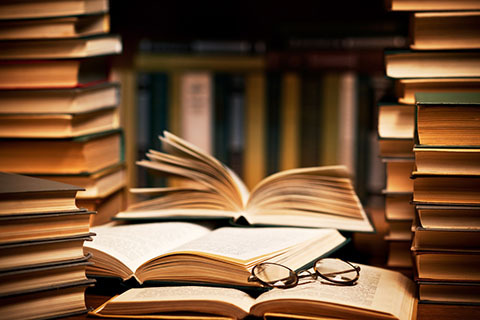 Because of the miracle of the World Wide Web a writer now has at his or her fingertips pretty much the accumulated knowledge, wisdom, lore, and artistic production of human kind as long as he/she can figure out the right search term in Google.  This has made writing a regular blog like mine immeasurably easier.  I can do at least a cursory research of any topic and generally put together an entry that can fool most people into believing that I know what I am talking about in a few hours.

It was not always so.  Not so many years ago any article of average blog post length was the equivalent of a semi-major college paper and required sometimes days of research both at home and in libraries and the production of copious notes.  For a lone wolf writer without a research department at his or her beck and call and without copy editors the kind of daily production I now attempt would be impossible.

Let’s revisit those quaint times.  We will begin with resources kept at hand, preferably within arm’s reach of the writer’s trusty manual typewriter—that’s a whole other story.  Here are some of the basics upon which I relied.

·         Dictionary.  I used my mother’s old blue-bound Webster’s Complete Collegiate Dictionary for years until it literally fell apart.  I replaced it with a fat red paper back with tiny print—The Miriam-Webster Dictionary.  Both invaluable tools, but you often need to actually know how to spell something to successfully look it up—a draw back for a writer who never met a spelling test he couldn’t flunk.  Roget’s Thesaurus was a must to avoid using the same word in a sentence two or three times. 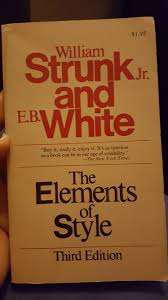 ·         Stylebook.   A must for any writer, I dabbled in the AP  stylebook, the standard of newspaper journalists, but generally followed an old friend from college—The Elements of Style by William Skunk and E. B. White, the now dated Bible  of more formal writing.  Despite the scorn of modernists it has firmly anchored me to such requirements as the Oxford comma and two spaces after a period ending a sentence.  However for narrative writing, both factual and fiction and of course poetry, I untethered my ship from any style anchor in the service effect.

·         Almanac.  These amazing versatile single volumes were a cornucopia of statistical, geographic, historical, biographical, and odd-ball assorted facts.  There were options available, but I preferred The World Almanac and Book of Facts which I purchased annually even when the $5.00 or so cover price for the paperback at the drug store seemed like an enormous sacrifice.  It also contained several nice, shiny pages of color plates including The Flags of the World and the United States, and a basic Atlas.  Each new edition also included noted obituaries and longer articles selected by the mysterious whim of the editors.

·         Encyclopedia.  A must-have, but a forbidding expense unless you were willing to settle on a twenty to thirty year outdated version offered at a garage sale for about a penny a pound.  Door to Door salesmen were still pitching the World Book, Book of Knowledge, and even the gold standard Encyclopedia Britannica on monthly payments that would stretch into the next millennia.  I had to settle on the basic but serviceable Funk and Wagnall’s Encyclopedia which I bought one volume a week as a premium offer at Dominic’s Supermarket in Chicago.  I also swallowed hard and subscribed to its Annuals which I kept getting for ten years or so to more or less keep the set current.  Anything I need greater detail on required a library visit to the temple of the Britannica.

·         Atlas.  I had an enormous National Geographic World Atlas with that publication’s elegant and detailed maps and which included maps of the solar system and universe.  A treat for the eyes, but unwieldy.  I also had a more manageable Funk and Wagnall’s atlas from Dominic’s and for a time a relief globe of the world I had in high school.  The trouble with atlases and globes is, alas, that in the turbulent modern world geographic boundaries, place names, countries, and empires change continually.

·         Bible.  Even if you are not writing specifically about religion, the Good Book was an essential reference and a key to much history, philosophy, and literary references.  There were even then numerous available translations, but then—and even now—I stubbornly used the King James Version of the Bible with the Words of Our Lord in Red Letters.  This is a choice mocked by biblical scholars who regard it an unreliable second or third hand translation from the original Hebrew and Aramaic to Greek and Latin.  But it is the edition I grew up on and as a poet I admire its majestic passages and cadences.  So many modern translations grate on the ears. 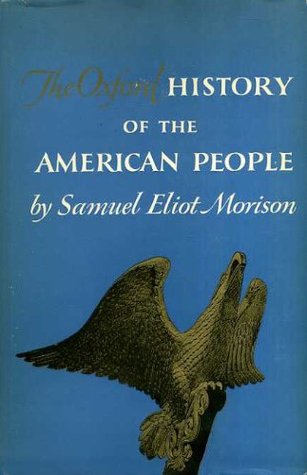 ·         American History.  I needed a fairly comprehensive single volume U.S. history source.  Perhaps I would have been better served with James and Mary Beard’s New Basic History of the United States, but I chose The Oxford History of the American People by Samuel Eliot Morison published in 1965.  Morison was a Boston Unitarian most noted as a Naval historian, but his book took into good account religious, cultural, artistic, and technical aspects of American history as well as the usual parade of Great Men, politics, and wars.  Later Howard Zinn’s People’s History of the United States provided a much needed bottom up view of history and took into account the real lives of ordinary people.

·   Telephone directories.  Modern life was impossible without them and they were magically delivered to your door annually.  In Chicago there were two enormous tomes—the White Pages and the H.H. Donnelly Yellow Pages. 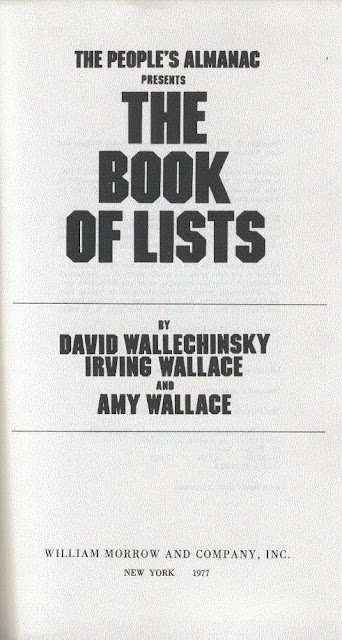 ·         Miscellaneous.  The Book of Lists By David Wallechinsky, Irving Wallace, and Amy Wallace was both a fun discovery and turned out to be a goldmine of trivia and obscurity—right up my alley.

·         Wish I had.  The reference I did not have and most wish I did was Bartlett’s Familiar Quotations.  Oh, what countless hours of searching that might have saved me.

A writer also had to be versed in current affairs and periodicals were they key.

·         Newspapers.  I was always at newspaper junkie.  Back in the day I regularly got both Field newspapers—the Chicago Sun-Times in the morning and the Daily News, home of Mike Royko and famous for its worldwide pool of correspondents.  Alas, the News folded, Royko moved to the Sun-Times which also had Roger Ebert, Bill Mauldin, and a descent selection of op-ed columnists.  But when we moved to Crystal Lake more than thirty years ago I switched to the Chicago Tribune which offered reliable home delivery, despite its odious editorial policy.  Since then both papers have suffered deep cuts to reporters and editorial staffs, but the Sun-Times has been reduced to a mostly pitiful shell.  For local coverage out here in the boonies, our local daily, now known as the Northwest Herald provided essential community coverage despite various deficiencies.  But few suburban areas in this country still have the luxury of a daily paper.

·         Magazines.  A newsweekly was a must.  I had been subscribing to Time since high school.  Henry Luce was a reactionary but you could be well informed if you kept in mind built in bias.  Time was still considered the most comprehensive alternative to the more liberal Newsweek or even more conservative U.S. News and World Report. I read Time weekly for so many years that my regular readers might notice the influence of some of its somewhat peculiar style in my own writing.  This is not a point of pride.  For more left leaning news and analysis I sporadically subscribed to The Progressive, The Nation, and In These Times often depending on deals offered by Publisher’s Clearing House so that my wife could enter the sweepstakes with a clear conscience.  In the same way I sometimes received childhood treasure The National Geographic and handsome hard-bound American Heritage.

If none of these resources proved fruitful it was off to the Library.  In Chicago sometimes the old branch library at Fullerton and Sheffield by the L would suffice before it was torn down to make room for DePaul tennis courts.  But often if meant a trip the glorious and inspiring old Main Library at Michigan and Madison where working in the elegant main reading room was a pleasure.  Later, however, it meant a trip to the dismal and depressing warehouse where the stacks were moved and kept for years before the Harold Washington Library finally opened.  That sucked the joy out of the trip.

In Crystal Lake it most often meant a 45 minute walk each way to the library.  Nice folks and a very well informed Reference Desk.  It meant combing the endless drawers of the card catalog with a slip of paper and a stub of a pencil in hand to note my discoveries then searching the shelves for them.  Of course scanning the shelves often tuned up unexpected discoveries and I often went home with unintended books.  Often older or more obscure books were unavailable locally, but I could often get them after a few days wait through the state-wide inter library loan system.  I remember finally getting a copy of the first volume of Henry Adams’s The History of the United States in the Jefferson and Madison Administrations in just such a way.

Of course sometimes even greater depth was required.  But access to university and specialized libraries was often difficult or impossible without academic credentials, verifiable employment with a recognized publication, or sponsorship by an established scholar.  All mostly insurmountable hurdles for an independent scribe without a degree or pedigree.  Even if permission could be obtained it usually involved travel to the institution.  That was tough when I sometimes barely had bus fare.

Locating an out of print books without haunting used bookstores was a real challenged particularly in specialized areas like labor history.  The book was likely out there someplace, but damned if you could find it.  After the Industrial Workers of the World ran out of copies it took me 15 years to run down a copy of the book I co-authored—The IWW—Its First 70 Years: 1905-1975.  Copies were out there languishing on the shelves of obscure radical book shops and used bookstores from San Francisco to Timbuktu but I had no way of knowing where.

Of course, all of that was then, the very quaint then dimly remembered by a grizzled few.  Tomorrow thanks to the blessing of the gods, Sir Tim Berners-Lee, and Bill Gates I will compose and post a blog entry probably without getting off my ass in a tenth the time the same piece would have required if I had researched and written in back in the Stone Age.  So it goes.

Posted by Patrick Murfin at 4:53 AM