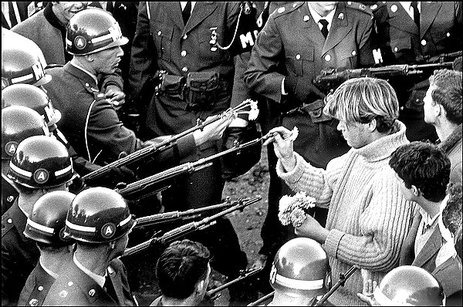 Note—This is related to the last post about the Trial of the Chicago 7 and the 1968 Democratic Convention protests.  This was kind of a preview featuring many of the same people.

There were other big marches in Washington in opposition to the Vietnam War.  Starting in 1965 they had practically become semi-annual events.  There would be more—and larger—ones later.  But the March to Confront the War Makers on October 21, 1967 was different.  It signaled a new phase in the anti-war movement that incorporated the rising youth counter   culture on a large scale for the first time and willingness for more aggressive confrontation of authority.  It also introduced onto a national stage some figures who would become household names within a year.

The march was organized, as were previous ones, by the National Mobilization Committee to End the War in Vietnam—universally referred to simply as the Mobe—a shaky coalition of more than 150 organizations including traditional pacifists, Ban the Bomb groups, liberals, the Old Left, the New Left, Viet Cong sympathizers, a sliver of the Civil Rights Movement, student groups like the Students for a Democratic Society (SDS), and anti-war veteran groups.  It was united only in opposition to the war. 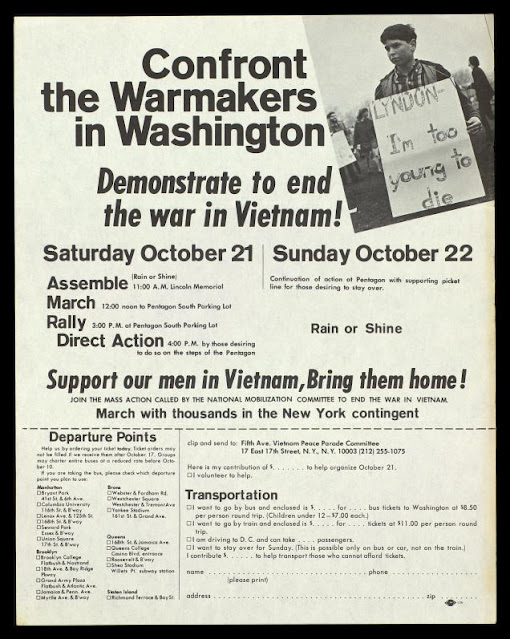 A Mobe flyer promoting the march had a distinctly traditional, Old Left look.  With the infusion of the youth culture into the previously mostly middle class anti-war movement, such calls would soon look far different.

The organization was so shaky that after the tumultuous events of this demonstration it fell apart.  It was re-assembled, minus its less militant components as the New Mobe the following year in time to organize protests at the Democratic National Convention.

The Mobe was led by veteran radical pacifist Dave Dellinger, the fifty-something editor of Liberation magazine.  In order to reach out to more young people—earlier marches, in retrospect seem like the sedate affairs of the middle class—Dellinger recruited California activist Jerry Rubin to be project coordinator for the march.  It was Rubin’s idea to add a March on the Pentagon after the main rally on the National Mall broke up.

Three central figures of the Chicago Democratic Convention protests of 1968, Abbie Hoffman, Dave Dellinger, and Jerry Rubin, first came together for the Marches on Washington Washington and the Pentagon.

The rally and March were just part of a series of actions in and around Washington.  A day earlier a march of hundreds on the Justice Department organized by the American Friends Service Committee (AFSC) and other anti-draft groups presented more than 1,000 returned Draft Cards to a reluctant Assistant Attorney General.  Other small demonstrations and picketing were organized by various component groups in the Mobe around Washington.

Among those who came to Washington, many in rented school buses, was a car load organized by Chicago Seed editor Abe Peck

A highlight of the Rally on the Mall was to be the arrival of the Peace Torch, lit in Hiroshima on August 6.  It was carried across country from San Francisco in a highly publicized relay reminiscent of the journeys of the Olympic Torch.

Although several Blacks spoke from the podium of the Mall Rally—mostly long time members of Old Left parties—most African Americans boycotted the main demonstration where President Lyndon B. Johnson was sure to come under attack.  Many were grateful for his steadfast support of major Civil Rights legislation.  A separate rally was held at Howard University where opposition to the war was largely separated from opposition to the President.  The most important Black leader to come out strongly against the war, Rev. Martin Luther King, was absent from both events.

The huge rally was typical of others of its type—a parade of speakers representing the component organizations interspersed with brief entertainment.  Dellinger hinted at a shift in anti-war strategy by saying that it was time to “to go from protest to resistance.”  Norman Mailer, then the most celebrated novelist in America, famously spoke.  His role in the Rally and later events was celebrated in his book Armies of the Night, winner of the Pulitzer Prize. 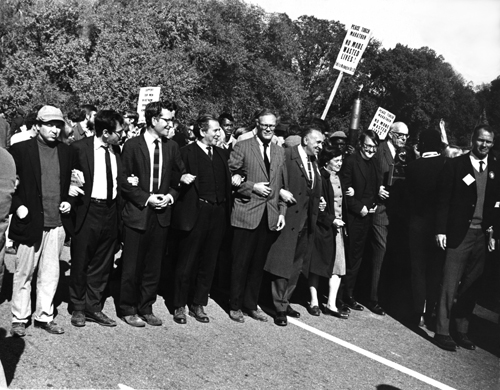 Noam Chomsky, Norman Mailer, poet Robert Lowell, Old Left leader Sydney Lens, Dagmar Wilson, and Dr. Benjamin Spock link arms with other luminaries and speakers as they set off from the main rally on the National Mall to head to the Pentagon.

The main speaker was Dr. Benjamin Spock, whose baby care book was the Bible by which most of the young members of the crowd had been raised.  Spock had supported Johnson in 1964 and felt betrayed by his escalation of the war.  The kindly Spock was one of the last nods at getting the parents of Baby Boomers on board the anti-war movement.  But the days when he and organizations like Another Mother for Peace could be the face of the movement were ending.

When the main Rally broke up, a large portion of the crowd began the two and a half mile march to the Pentagon.  By some estimates as many at 50,000 began the long walk, which took them across the Memorial Bridge over the Potomac and up a long service road to the Defense Department headquarters.  Many did not finish the trip.  The line strung out so that it took well over an hour for everyone to get into the site.

When marchers got there they were confronted with a building encircled by 2,500 Federal troops and 200 U.S. Marshals.  A rope line was set up in advance of the security forces and authorities announced that anyone crossing the line would be arrested.

Marchers also encountered a smaller group already at the Pentagon.  Organized by Rubin and Abbie Hoffman, festooned in an American flag shirt and Uncle Sam hat, the newly formed Youth International Party—the Yippies, an organization that hardly existed except in flyers circulated on college campuses and in big city youth culture enclaves, were there to supposedly levitate the Pentagon.

Many of those first on the scene peacefully approached the defense line.  Images of young people putting flowers in the barrels of Army M-15s became iconic.  But soon more militant demonstrators were challenging the line.  Arrests began.  Small groups managed to get partially up the steps of the building.  Others found an unguarded access ramp and charged in.  They were met with rifle butts and particularly by the aggressive batons of Federal Marshals who busted several heads. Tear gas was used on the crowd and there was some chaos and panic. 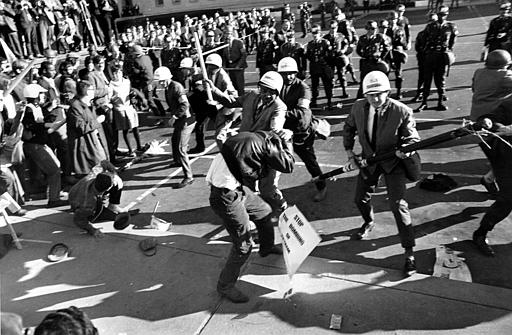 But the majority of the demonstrators continued to stand by.  Many sang America the Beautiful and other patriotic and anti-war songs as the battle raged.  By 7 pm things had settled down.  Authorizes announced that the permit for the demonstration had expired.  Most of the remaining demonstrators drifted away, but about 7,000 chose to stay.  No move was made to dislodge them, but as overnight temperatures dropped, many more left.

At dawn a few hundred left to march to the White House to “wake up LBJ.”  There were more arrests there, including those charged with picking flowers in Lafayette Park.  A few hundred others stayed behind to keep a vigil at the Pentagon.  At midnight the remaining 200 were rousted or arrested.

In all 681, including Hoffman and Mailer, were arrested over the two days.  Many demonstrators were bloodied or overcome by tear gas.  Over 100 demonstrators were documented to have been treated for injuries.  Many more were undoubtedly hurt.  In addition some soldiers, marshals, and police sustained minor injuries, mostly from objects thrown at them during the confrontation at the Pentagon or scuffles during arrests.

The events in Washington that weekend set the stage for even more tumultuous and confrontational protests around the country in the next few years. 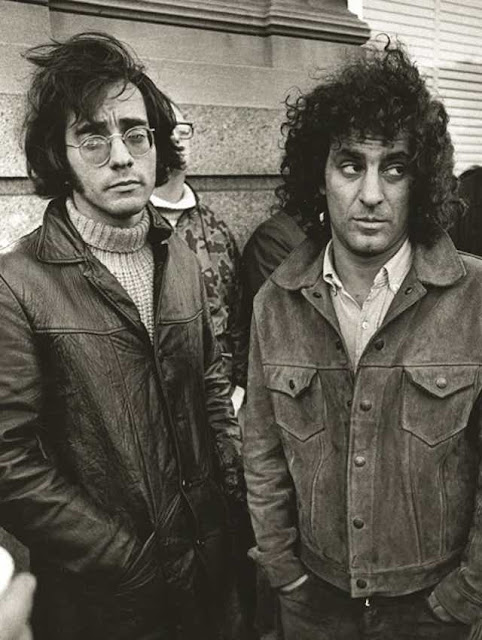 In Chicago the Seed offices became the unofficial headquarters for the Yippie’s next big project, the counter cultural Festival of Life during the 1968 Democratic Convention.  But Abe Peck had a warning for flower-power hippies who expected bands and dope shrouded festivities in the park—“If you come, be sure to wear some armor in your hair.”

Posted by Patrick Murfin at 6:46 AM