The Bones of Halloween From Samhain to Modern Revelry 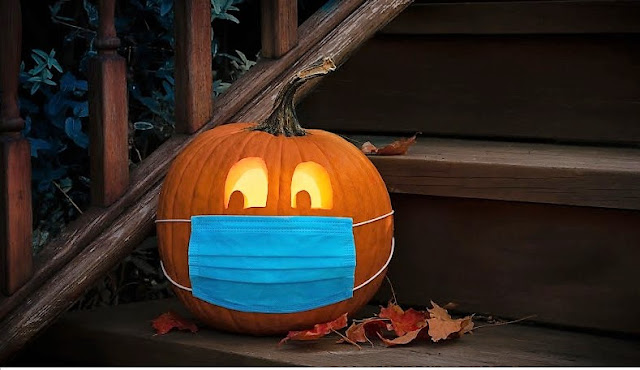 As real horror stalks the world, Halloween will be very different in the age of the Coronavirus.

Note—This annual chestnut is back!  But this year the observations are muted by true horror—the mounting death tolls of the Coronavirus pandemic.  Trick or Treating is iffy or banned in many places.  Bars are closed in Illinois and elsewhere.  We are advised not to let anyone in our homes who do not live there for parties.

Halloween traces its origin to the Celtic harvest festival Samhain.  It was one of the four festivals that fell between the Solstices and Equinoxes and which celebrated the natural turning of the seasons.  Samhain was particularly important because it was the gate in time to the death and starvation season of winter, as well a time to celebrate the recent harvest.

This association with the death of winter also extended to the spirit world, which was considered to be closer to the mortal plane than at any other time of the year.  The Celtic priests—the Druids—marked the occasion with the lighting of bonfires and with gifts of food and drink for the spirits of the dead.  Some consider it also analogous to a New Year’s Celebration launching a new cycle of the seasons.  It was popularly celebrated by the peasantry long after the Druids passed and well into the Christian era. 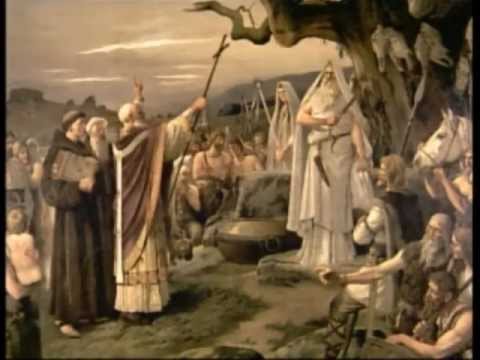 Catholic priests exorcize Druids and their spirits in this fanciful illustration.  But folk customs around Samhain persisted and the Church tried to adapt them to All Souls Day.

Too popular to squelch, as with many pagan observances Catholic Church co-opted the custom as All Saints Day on November 1.   In rural regions especially Samhain customs continued to be observed on the evening before the Holy Day—which came to be known as All Hallows Eve, or Hallowe’en in Scots.

Immigrants from the British Isles brought some of their customs with them to the New World, but Halloween does not seem to have been widely celebrated colonial America.  The Puritans spent a lot of time trying to squelch other pagan customs like the May Pole dances associated with the spring Celtic festival of Beltane, but for all of their obsession with witchcraft, usually associated with those who continued to keep the old pagan traditions, there is no evidence of suppressing Samhain or Halloween. 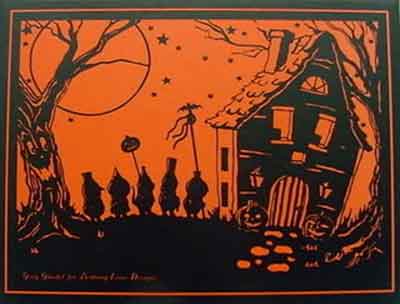 These types of colorful greeting cards from around the turn of the 20th Century were  evidence of the growing popularity of Halloween while helping to spread it and create many of the iconic images still associated with it.

In fact there is little mention of Halloween in America until the second half of the 19th Century.  By the 1880’s and ‘90’s greeting card companies were printing colorful post cards featuring images of witches, black cats, skeletons, and pumpkin Jack o’ Lanterns—all of the classic images associated with Halloween.  Period photos from around the turn of the 20th Century show both adults and children in costumes, most commonly some variation of witch or ghost themes.

A few scattered newspapers began reporting ritual begging on Halloween by masked youths accompanied by general hooliganism, threats, and acts of vandalism.  This was probably introduced by the wave of poor “country” Irish immigrants that began after the Potato Famine and continued through most of the rest of the century.  The ritual begging in costumes and general hooliganism more closely resembled rural Irish Wren Day—St. Stephen’s Day December 26—customs than those celebrated in either England or Scotland.

Rowdyism by boys and young men was reported in big cities and small towns alike and often included setting small bonfires of junk in roadways; tipping or stealing outhouses; pelting houses with eggs, rotten vegetables, or manure; letting horses and livestock loose from barns and pens; and sometimes blocking chimneys so that houses would fill with smoke.  Sometime significant damage was done.  The Halloween scene in the classic MGM musical Meet Me in St. Louis shows a rare screen glimpse at the rowdy shenanigans most Americans associated with the celebration. 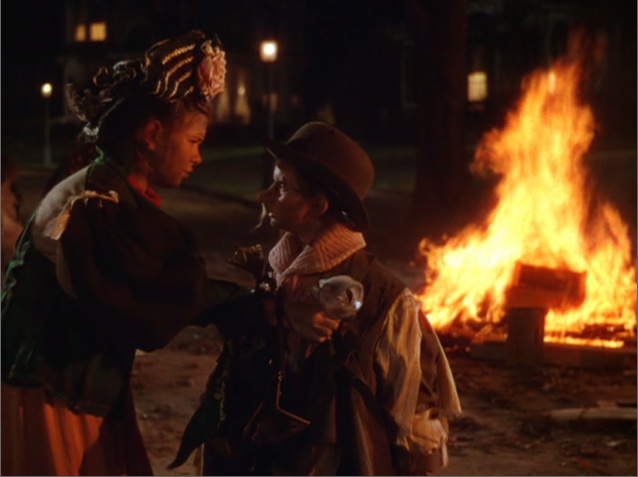 The scary Halloween scene from Meet Me in St. Louis illustrated both the street begging and hooliganism associate with it in the early 20th Century.

As it spread, customs for observing the holiday varied regionally. Communities started to organize activities to keep the kids and hooligans off the streets, with mixed success.  Parties with games such as bobbing for apples and the telling of ghost stories were fairly common.

Animated films of the ‘20’s and ‘30’s such as Walt Disney’s 1929 Silly Symphony The Dancing Skeletons showed the popularity of the holiday and light-hearted images of death, witches, and black cats.  The Skeletons perhaps show a tip-o’-the-hat familiarity with the Mexican customs around The Day of the Dead which is celebrated on All Soul’s Day. 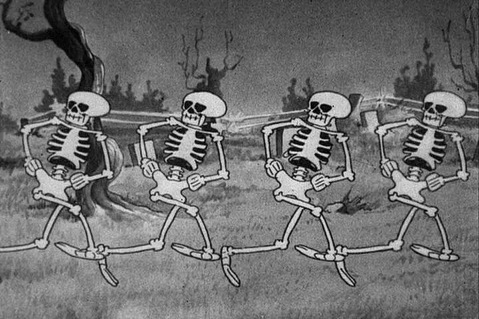 The custom of trick or treating seems to have spread slowly.  It combined the ritual begging with toned-down tricks that were a little less extreme than the wild rampages reported earlier.  What progress it was making was largely interrupted by the Depression years when families had little extra money to spend on treats and by the sugar rationing of World War II.

Trick or treating was still far from universal until after World War II when it became a topic of popular radio programs like the Jack Benny Show and Ozzie and Harriet. 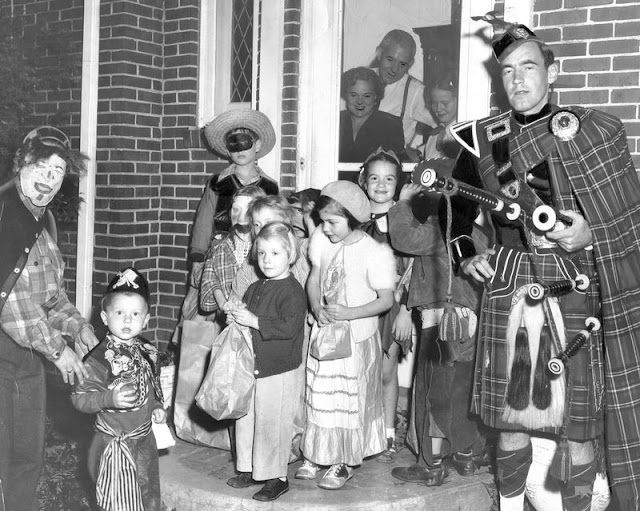 In 1947 the popular children’s magazine Jack and Jill published a story on the custom of Halloween begging and described it in detail, spreading the practice widely and with amazing uniformity.  By 1951 the practice was wide spread enough that a Philadelphia woman, Mary Emma Allison and the Reverend Clyde Allison decided to channel the energy to constructive purposes by introducing Trick or Treat for UNICEF to support the work of the United Nations international children’s relief.

By the mid 1950’s with the strong support of the candy companies and the introduction of cheap masks and pajama style costumes for children, the practice of trick or treating had become ubiquitous and had even taken on a feeling of a long standing practice.

What started with ghost stories and the like, soon spread to all types of horror, and fueled by the growing popularity of increasingly violent Hollywood films.  Gore became and more and more common theme and showing horror films for the whole month of October in theaters and on TV was standard by the early 1970’s.

About the same time the first generations of trick or treaters grew up but continued to enjoy the dress-up and parties of Halloween.  It is, year by year, an increasingly popular adult holiday, incorporating many of the features of various world masquerade festivals with macabre twist. 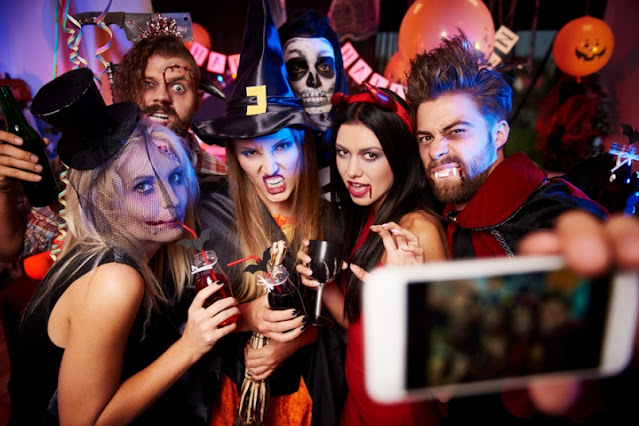 Adult carousing has made Halloween a rival to New Years Eve and St. Patrick's Day for the party-till-you-puke crowd.

Halloween is now the second most widely celebrated holiday in the United States and is an economic powerhouse, generating sales second only to Christmas.  Popular American media have spread the customs of trick or treating and celebrating gore around the world, often supplanting truly ancient celebrations of Halloween in the Celtic countries.

The resurgence of Christian Fundamentalism in the U.S. has led to a counter movement to strip the “Satanic” festival from public schools and the wider community.  Although they get it wrong—there was never any connection between Satanism and Halloween—the Fundies, ironically, at least recognized a religious tradition hiding under the commercial hoopla. 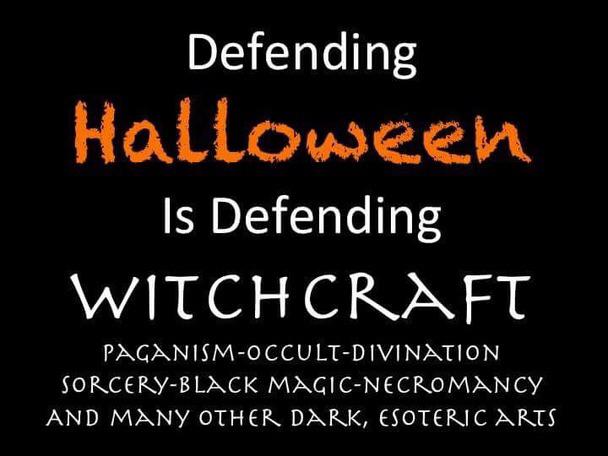 Fundamentalist opposition to Halloween might be swimming against the cultural tide, but increasingly schools and some municipalities skittish about the complaints have substituted a bland harvest festival or banned any kind of celebration.

At the same time re-invented “traditional” paganism like Wicca, one of the most rapidly growing religious movements of the last decades, has striven to recapture the nearly lost significance of the holiday’s roots in Samhain—and sometime invented traditions on flimsy or non-existent evidence.

Go thou, and celebrate as thou wouldst.

Posted by Patrick Murfin at 5:58 AM